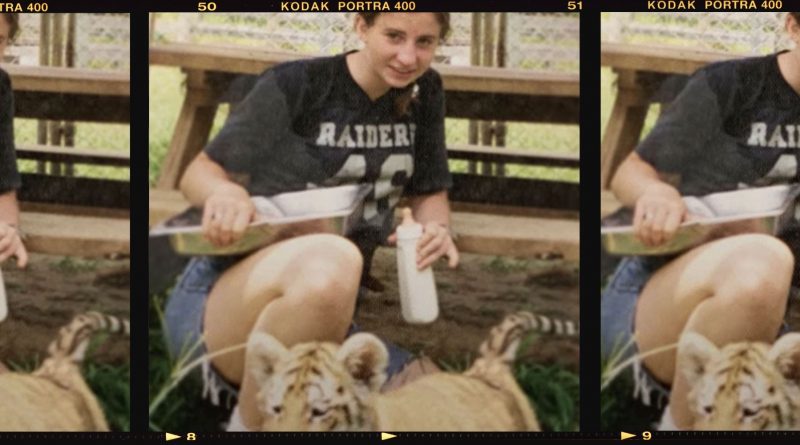 Since it premiered on Netflix in March, the docuseries Tiger King has come up in many Zoom and FaceTime chats during this period of social distancing and quarantine. Its characters, real-life people who worked at Greater Wynnewood Exotic Animal Park (G.W. Zoo), inspire strong opinions in fans of the show. When Netflix announced it was coming out with an eighth bonus episode, a sort of “where are they now” special, Tiger King fans were ready.

That episode came out today, April 12, and boy oh boy was it a wild time. If you were blown away by the bonkers stuff you learned over the course of the seven original episodes, then this might be too much for you.

My Life As a Tiger Trainer For Doc Antle

From the comfort of his home (because that’s how things have to work right now) comedian and actor Joel McHale interviewed some of the main characters from the series, and they revealed things that we didn’t know about the show. Here are 11 takeaways from the episode, from revelations to updates on where all these people are (except Joe “Exotic” Maldonado-Passage, who as anyone familiar with the show knows, is in prison).

Joe Exotic was even more destructive than the show portrays

Former G.W. Zoo manager John Reinke told McHale he’s doing well, has a new girlfriend, and is waiting to get a divorce following the pandemic. He also shared some of his scary personal insight about Exotic. We saw in the series that the former zoo owner had a temper and often fired people at the end of an angry sentence, but Reinke says he actually caused his property physical harm.

“The man’s done a lot of stupid shit,” Reinke said. “I mean there towards the end, he got to where he’s blowing everything up. Hell, he blew up my golf cart and my damn cabin.” He went on, “Knocked the windshield out of my golf cart. Blew a hole in my cabin. Blew the window out.” Reinke said he remembers that Exotic’s behavior “just got to where he was all about the cameras.” He added that he did not think Exotic should be a free man and predicted he’d die in prison. 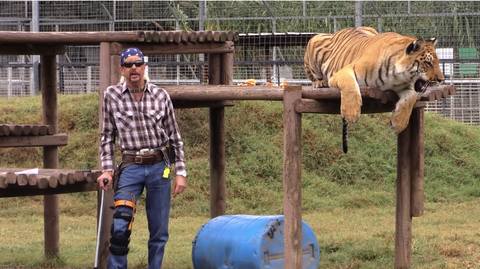 Joe Exotic and a tiger at G.W. Zoo.

Lowe, the man who owned the G.W. Zoo after Exotic, still says he had nothing to do with the murder-for-hire setup for which Exotic is imprisoned. If you didn’t watch the original series, it’s worth noting that, among other things, Exotic was accused of putting out a hit job on his known enemy, Carole Baskin, who owns and runs Big Cat Rescue in Tampa, Florida. There is a theory among fans that Exotic was set up by Lowe in this whole murder-for-hire scenario.

“I think they tried to sensationalize the story to give it a villain,” he said, adding, “Joe is his own worst enemy. Joe didn’t get set up. He admitted to killing the tigers from jail.”

Lowe mentioned that Exotic, on several occasions, talked about how much he disliked Baskin and made videos to express just that.

Lowe appeared with his wife Lauren, and you could hear their baby making some noise in the background. They also discussed how much they love their nanny and displayed a photo of her.

Saff thinks the documentary didn’t show the good in Exotic

Saff, the staff member who lost is arm working for Exotic, is a trans man portrayed incorrectly as a woman throughout the series. He’s the only person interviewed in The Tiger King and I who had nice things to say about Exotic. He said he thought “justice was served” when Exotic went to prison, but adds that he doesn’t want Exotic to die in prison.

When McHale asked Saff who he would trust, the tiger who bit his arm off or Exotic, Saff said the tiger, if that tells you anything. He also wants Brandon Baker, the actor from the 1999 Disney film Johnny Tsunami, to portray him in any film about the zoo.

Exotic used the actual footage of Saff’s attack in safety videos for new employees. Saff told McHale he’s watched the footage “over and over” and it was used for new employees to show them what they could be getting into if they took on this career path.

Joe Exotic was purposefully cruel to animals, according to the people who worked with him at the zoo

Rick Kirkham, the veteran journalist and producer who tried to make a reality series about G.W. Zoo, told a story about a woman who dropped off a horse at Exotic’s zoo and asked him to take care of it. The horse just needed a place to live out its life. Kirkham said Exotic assured the woman, who was visibly emotional and thankful, that he would take care of her horse. As soon as she left, Exotic allegedly led Kirkham to the trailer and shot the horse, telling Kirkham that it was food for the tigers. The producer said “cruel” behavior like this was not uncommon from Exotic.

Erik Cowie, whose interview was the first shown in the episode, told McHale that his former boss used to kill the cats even when they weren’t physically unwell. McHale said he assumed there were medical reasons to put down the cats, but Cowie had another story. “You would think, but no,” he said. “They were beautiful, healthy tigers that he called over to the fence and he shot them in the head because he needed the cage space.”

Kirkham told McHale that the man who called himself the “tiger king” was actually terrified of the cats he had at his zoo. He said that the photos of Exotic with the tigers don’t represent the real way he felt about them. He said one of the tigers Exotic is seen cuddling up to was blind and the other was on tranquilizers.

All the Tiger King stars get stopped at Walmart by fans, even during a global pandemic

When McHale asked these folks what life is like now, more than one said they get stopped by fans at Walmart, even during a pandemic. Because all of America seems to have watched this show in quarantine, its subjects are now household names and faces. Just remember, everyone, please maintain a good six feet of distance between you and your favorite Tiger King personality

Remember Exotic’s libertarian campaign manager who helped run his bid for governor of Oklahoma? McHale asked if he still stands behind his memorable “Fuck the feds” line, Dial says he absolutely does. Dial also shared with McHale that he still has not been able to seek therapy after witnessing Exotic’s husband, Travis Maldonado, die by suicide in front of him. He adds he’s hoping to get the funds to seek the help he needs soon.

Kirkham said he heard Exotic joke a lot about his enemy, Carole Baskin. He added that once, Exotic jokingly asked Kirkham to kill Carole for him. “I’ll make you a rich man if you’ll kill Carole,” he allegedly said.

After all of his footage burned to the ground, Kirkham met a Norwegian woman and lives in Norway now

Kirkham’s footage mysteriously burned in a fire on Exotic’s property (something Kirkham thinks Exotic knows more about than he let on). With hours of his work, his time, and money gone, Kirkham met a woman from Norway and lives there now. He also still wears his Indiana Jones look. Good for Rick Kirkham. 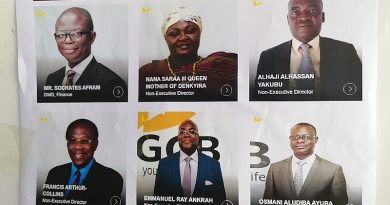 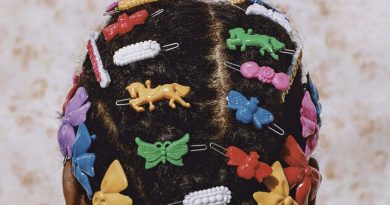 Jasmine Mans’ ‘Serena’ Is the Definitive Ode to the Tennis Great

Listen to article Accra, May 4,2020 – MTN Ghana Foundation has announced the opening of entries for its Bright Scholarship