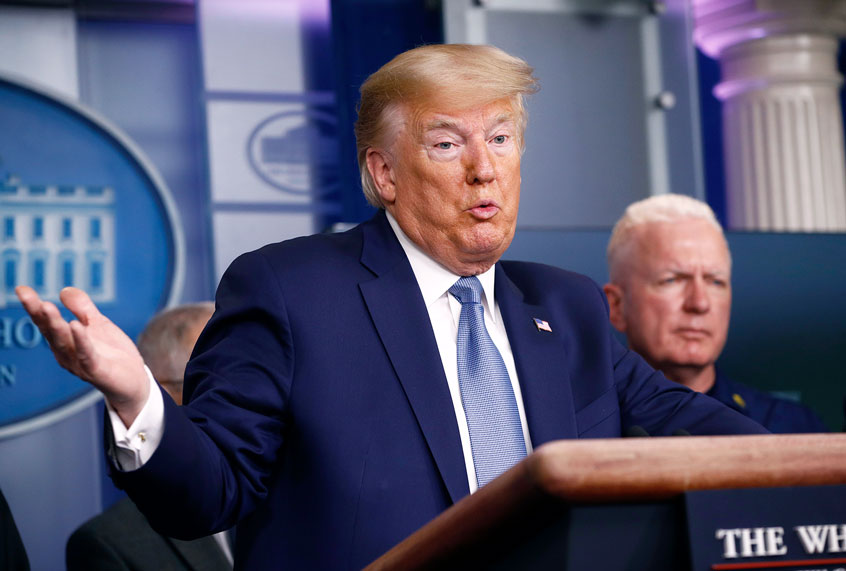 Donald Trump is on a search-and-destroy mission to remove anyone who might get in the way of him committing more crimes or using the federal government as a personal piggybank for himself and his friends. And he’s using the coronavirus pandemic as a cover, knowing that both the media and Congress are too busy dealing with the crisis to prioritize Trump’s obsession with maximizing his level of criminality and corruption.

Last week, with the media preoccupied with rising death tolls and exploding unemployment figures, Trump fired Michael Atkinson, the inspector general for intelligence services, as a clear cut act of revenge against Atkinson for reporting the original Ukraine whistleblower complaint to Congress last summer. That complaint, of course, exposed Trump’s criminal conspiracy to blackmail Ukrainian President Volodymyr Zelensky into a phony investigation of former Vice President Joe Biden, who is now certain to be Trump’s Democratic opponent in the 2020 election. (Bernie Sanders officially suspended his campaign on Wednesday.) The result was Trump’s impeachment by the House of Representatives, which should have led to his removal from office — if Senate Republicans weren’t willing to sign off on any crime he wishes to commit.

Trump described Atkinson as “not a big Trump fan, I can tell you,” as if that justified firing an inspector general who fulfilled his legal responsibility to report a president’s potentially criminal actions to Congress.

On Tuesday, Trump removed another inspector general, Glenn Fine, who oversees the Defense Department. Fine was originally set to chair the committee that oversees how the $2 trillion in coronavirus relief funds will be disbursed. Trump would like to replace him with Jason Abend, a Customs and Border Protection official. This move, coupled with reports that Trump is appointing Brian Miller, one of his personal lawyers — who has publicly sneered at the idea that Congress should have the power to hold the executive branch accountable— as the special inspector general overseeing stimulus spending should make the president’s intentions clear.

As Democrats have warned, Trump clearly wants to treat the stimulus fund, which is supposed to mitigate the nation’s economic collapse, as a slush fund for his rich supporters. One by one, he’s eliminating anyone he perceives as an obstacle to that goal.

During Monday’s propaganda rally and/or press briefing, Trump lashed out angrily when ABC News reporter Jon Karl asked him about a report from the Health and Human Services inspector general that detailed Trump’s massive failures to help the medical community deal with the onslaught of COVID-19 patients.

“Did I hear the word ‘inspector general?” Trump ranted. “Could politics be entered into that?”

Translating Trump’s incoherent ramblings isn’t fun for anyone, but his implication was clear — any inspector general who wasn’t hand-picked by him is motivated by “politics” and therefore can’t be trusted. What HHS inspector general Christi Grimm had in fact concluded was that Trump’s handling of the coronavirus crisis has been incompetent, which is about as controversial as observing that cats have whiskers.

Trump’s attack on Grimm sends the same message as the other two firings: Anyone who tries to criticize Trump, much less stop him from committing crimes or treating government money as a slush fund, is in danger of losing their job.

Indeed, it’s starting to look like the purge of inspectors general — and their replacement with Trump cronies who will look the other way while he wets his beak or nourishes his allies — has just begun. Late on Tuesday, Real Clear Politics White House correspondent Susan Crabtree tweeted that “Trump is firing 7 IGs” in one fell swoop, and “wants his own people in those positions now.”

Crabtree tried to put a positive spin on this, in the spirit of RCP’s obvious Republican tilt. But Trump — who would face any number of criminal indictments if he weren’t protected by his office — deserves no benefit of the doubt.

On Tuesday, Trump appeared to confirm the rumor during yet another of his tedious camera-hogging sessions disguised as public health briefings. He claimed there are “reports of bias” involving inspectors general and his team would be “putting in seven names. I think it was seven.”

“President Trump is abusing the coronavirus pandemic to eliminate honest and independent public servants because they are willing to speak truth to power and because he is so clearly afraid of strong oversight,” Senate Minority Leader Chuck Schumer said in a statement.

That’s all true, but could be considered a massive understatement, considering what we’ve seen of Trump’s behavior over the past three and a half years. There’s no telling what kind of criminal and corrupt behavior he plans to get up to between now and the presidential election, and what he fears that honest inspectors general might tell Congress if they aren’t driven out and replaced with Trump flunkeys.

Trump has had only three goals as president: 1) Do as much racist crap as possible; 2) work as many angles as possible to enrich himself and his corrupt allies; and 3) Get re-elected, even if it means massive cheating or illegal interference on a previously unimaginable scale.

Having honest inspectors general embedded in government agencies poses a threat to all three goals, but especially to Nos. 2 and 3. (Sadly, entirely too much of Trump’s racist agenda is legal, or has been rendered so by a Supreme Court controlled by Republican hacks.)

That Trump is making his big move now isn’t a surprise.

For one thing, the coronavirus and the resulting economic collapse are obviously threatening his chances of winning in November. That’s only going to escalate his interest in finding ways to use the powers of his office to cheat in the election, which is what he was impeached for doing in the first place.

But even if Trump loses the election, he will want to grab as much cash for himself and his friends as he can on his way out the door. (Even assuming he accepts the results and will leave office voluntarily.) That $2 trillion stimulus package is clearly quite the temptation for Trump, and there can be no doubt that looting it is a major goal. There are provisions in the bill meant to prevent Trump and his close allies from siphoning off stimulus funding, but making sure those provisions are observed requires vigorous oversight — which is obviously and blatantly what Trump doesn’t want.

That means Congress and the media are going to have to step up and do more — which is a big ask, in the middle of a pandemic. The coronavirus is interrupting the ability of Congress to do its work, and removing the inspectors general who are supposed to inform Congress of presidential wrongdoing only makes the problem worse.

The media is already getting hit by reduced advertising revenue — even though readership and viewership are up with so many people stuck at home — and is mainly focused on getting out accurate information about the pandemic, rather than digging deep into Trump’s corruption. Even reporters who do that work can expect fewer people to read it or elevate it on cable news or social media, because other stories will seem more pressing.

In a statement released after his firing, Atkinson urged government contractors and employees to report “unethical, wasteful, or illegal behavior in the federal government,” because the “American people deserve an honest and effective government.”

“Please do not allow recent events to silence your voices,” he concluded.

But of course that’s exactly what Trump, an opportunistic weasel to the core of his being, hopes will happen during what could be his last year in office. People are dying and losing their jobs, but our president’s principal focus is on grabbing as much silverware as possible before he’s evicted from the White House.

Dr. Abdul El-Sayed: This pandemic is a “mass trauma” that will change American society

Did this virus come from a lab? Maybe not — but it exposes the threat of a biowarfare arms race

All the wealth of experience he garnered in his life time qualifies him.

GOD WILL SHAME U

Is only the people who did nt attend school that always doubt others credential. If nt for President Jonathan some tailor would av nt complete their tenure. Obaseki is more than qualify bros. Am sure if they thoroughly screen them,mayb GGO,CHRIS,MATHEW,ODUBU will be the only one's qualified.

I agreed with you