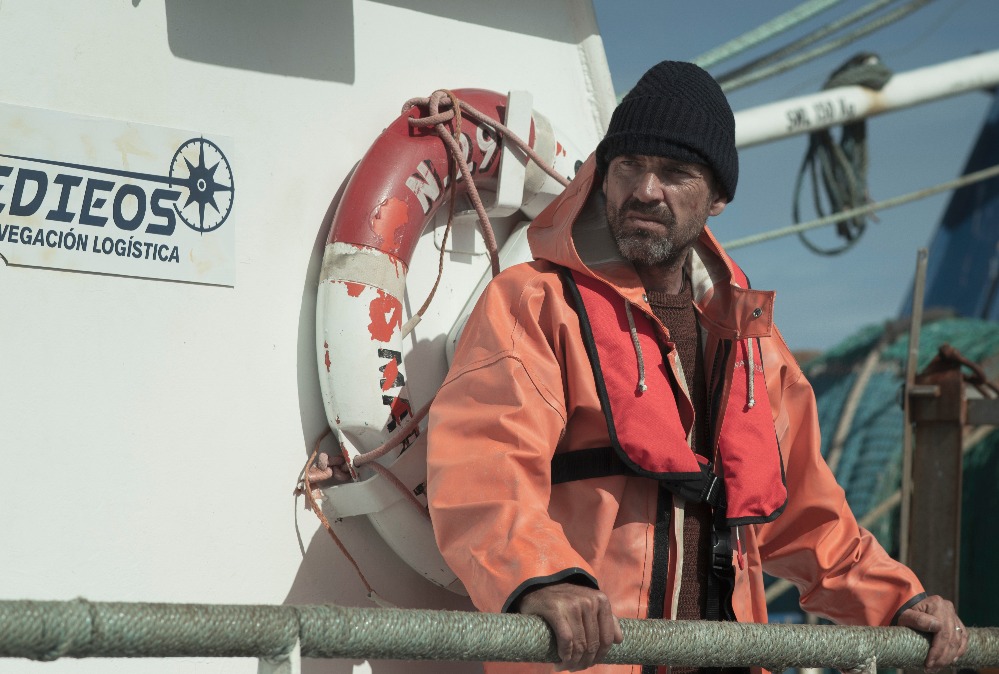 In a different kind of shelter-in-place drill from our own, the characters in writer/director Neasa Hariman’s slick thriller, “Sea Fever,” are stranded in the middle of the ocean and facing a medical emergency.

Siobhán (Hermione Corfield) is a scientist who is a good observer — she sees patterns, anomalies, and variations — but she is not good with people. She reluctantly boards an Irish fishing trawler captained by Gerard (Dougray Scott), who co-owns it with his wife, Freya (Connie Nielen). When Gerard sees that Siobhán has red hair, he takes it as a bad omen. His fears come true when the trawler gets stuck; a huge, squid-like creature has attached its tendrils to the boat. Hoping to mitigate their situation, Gerard, Siobhán, and fellow crewmember Johnny (Jack Hickey) search another boat they encounter only to discover a dead crew. They blame it on “sea fever,” or the madness that comes from being isolated for so long.

However, as members of the trawler start dying one by one, Siobhán realizes that the creature has poisoned their water supply with a deadly parasite that makes anyone with an open wound vulnerable. Now, the risk of returning to land could cause a pandemic.

Dougray Scott disappears into his role as a gruff sea captain who makes questionable decisions during a time of crisis. The actor discussed his thoughts on isolation and public health concerns, taking risks and making sacrifices, and the appeal of genre films, like “Sea Fever.”

As the film progressed, Gerard really needed a shower. He was grimy and sweaty. I could practically smell him. Can you talk about getting into character?

I spent quite a lot of time with local fisherman. I went on boats and talked to them like I was making a documentary. I stayed in the same clothes for the whole shoot. These guys don’t shower very much. I didn’t wash my hair. Occasionally, I ran a sponge across my body. It was an intense shoot over several weeks.

What are your experiences on boats? Are you yare?

As a kid I went sea fishing and loved it. I’ve been on trawler boats in Scotland. But I never spent huge amounts of time on boats. The risks fishermen and fisherwomen take — I remember going into a Scottish fish warehouse where they export fish to the rest of Europe, and the photos on the wall are young kids who died at sea. It brings home how precarious that world is. You take your life in your hands every time you go out, and the water is very unforgiving. It’s a brave job these people do so you can eat fish.

Are you superstitious like Gerard? Do you look for signs and omens for guidance in life?

I am not massively superstitious. I try to follow a path of living in the moment. I know a lot of fishermen are superstitious about redheads. But I don’t have that many superstitions. I try to avoid walking under a ladder, but that’s because I’m wary of a hammer falling on my head. I did see a black cat when I was out cycling today.

What is the appeal of making genre films like “Sea Fever”?

The film reminded me of a cross between “Alien” and “Jaws” and that genre of filmmaking. I think the story was very appealing and different than things I read. The characters are well defined, and the mystique of the world they find themselves in with this sea creature. The characters have a very Celtic way of dealing with things — burying things deep down. They are forced to confront what is happening in present time but also what happened to them in the past, as Gerard and Freya do regarding what happened to their child.

The film addresses issue of madness that comes from being isolated. What can you say about being quarantined right now?

When you tell people what to do — stay indoors as much as possible — we don’t take kindly to that instruction. It makes us think we’re in a police state. It’s not easy, that’s for sure. I’m following the guidelines. I have not socialized with anyone for two weeks. We are social animals, but I love solitude, and I love to sit in the house and read a book. I do like to exercise. I ride my bike every day. I’m reading a lot and catching up on TV shows. I’m working on other stuff. “Batwoman” begins in July, if all is good. I’m trying to enjoy spending time at home because I am away so much. I don’t get to spend enough time with the family. But I’m not going to lie, I am getting a bit stir crazy.

Siobhán insists on quarantining the crew for 36 hours, and Gerard prefers to return to land to seek medical treatment. What can you say about his morality concerning a potentially fatal public health crisis?

He wants to get back for the people who are ill, and he sees it from a medical point of view. She’s right, but he knows the power of the desire to get back to dry land to get treated so he can save their lives. But he’s not convinced — a bit like people when you present them with the circumstances of COVID-19, and how we deal with that. Some people are cynical about it, and don’t want to believe the truth, and their selfish desire overrides the scenario.

Gerard makes a decision and takes responsibility. He doesn’t want to be told what to do by young scientist who just appeared. The crew doesn’t know how [the parasite] passes from person to person, so it’s fear as well that’s motiving him to get the boat back to land. It’s not black and white.

Gerard deliberately keeps the truth of certain things from his wife and from the crew. How do you process his behavior?

I think he’s desperate. His financial livelihood is on a knife edge. And he is in desperate straits. They owe money; that’s their life. He wants this one big catch to pay the crew and keep him and Freya afloat. That helps determine the choices he makes about what he knows, and what he tells the crew. It’s not the right thing, and Freya admonishes him, but she understands why he did it. They are understandable choices, done out of humanity.

Some of the characters in the film take pretty dangerous risks. What can you say is your level of risk?

I think I’ve never been one to shuck a challenge. I’ve taken risks in terms of opportunity to play someone different. In my life, the risk I would take would be in regard to my family. I’d give up my own life to save my son or daughter. But I think most people would do that. I’m quite risk adverse. I like adrenaline. I like to think I’m sensible. But I have taken risks from time to time. Gerard lives in a different set of circumstances. His life, by nature, is full of risk, and that’s the life he’s chosen and it’s all he knows. He’s a huge risk taker. I’m not in the same area. I’m more measured and safe than he is.

Likewise, the film shows how characters often sacrifice themselves for the greater good. What are your thoughts on that theme in “Sea Fever”?

We’re all experiencing a little bit of that right now. It’s not the same as sacrificing your life or your country, but we’re sacrificing our social lives and ability to work, and our businesses and livelihoods. The decisions are for the greater good of humanity than for ourselves, but ultimately, it’s the right choice to make because there is so much we don’t know about this COVID virus. There’s more that we don’t know than we do. When there will be a vaccine or how warm weather will help extinguish it? We have to follow the guidance of the medical community. I think ultimately, to sacrifice is tough at the moment — not just in terms of the isolation but the financial hardship that people are encountering and going to encounter. It’s a dilemma. It’s a new experience in the world. This is real, but it is surreal. We just to only seeing it in movies, like “Sea Fever.”

“Sea Fever” will be available on VOD/Digital on April 10; the film’s premiere will be streamed live on April 9 with the cast and crew, including Scott at the “Sea Fever” website  for a small fee.

Fix it and forget it: A macaroni and cheese recipe for your slow cooker

Governors of the ruling All Progressive Congress, APC in the name of the Progressive Governors Forum have unanimously thrown their weight behind the second term bid of their colleague, the Edo State G...
View on Facebook
·Share

When you finish your fake news , just enter go sleep

Is he the one coming to vote for him in Edo state?

He is not the one coming to vote in edo but this is a reflection of the kind of democracy we practice. The people do not matter but the leaders, no matter where they reside.

They are too small

How many of them

Good for that introvert called Tinubu.

Did Tinubu tell them that he is going to contest in 2023?Moreover,2023 is still far,a lot of things will happen before then.However,I dont believe in the news because can they go to Tinubu's house & be blackmailing & threatening him.

If the man non use his power. Na him sabi. He shouldn't allow a group of greedy people determine the future of the state. Use your power and influence mr Governor

It's so obvious that few greedy Benin politicians don't know the asset they have as a son in Gov. Godwin Obaseki. Maybe the Esans should adopt him as one of our Darling Jewel.

Edo Central Senatorial District (Esan Nation), are solidly behind this illustrious son of Edo state and come what may, he will be reelected by God's Divine Grace to complete the great job he has started.
God above everything!

Dr Chidia Maduekwe, Managing Director, Nigerian Film Corporation (NFC) has said that the corporation is set to take its ‘Mobile