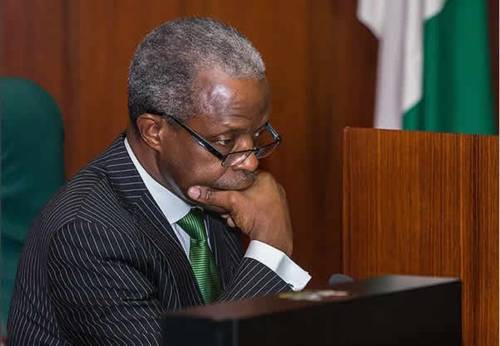 If you were following the news closely, you would have heard or read that on Monday, March 30, Vice President Yemi Osinbajo, SAN, headlined a Google hangout organized by the HACK COVID-19 Call Centre. At the online event, the VP engaged young Nigerian technology innovators in discussing about the impact of COVID-19 on the economy and wellbeing of Nigerians.

The Director-General of the Nigeria Centre for Disease Control (NCDC), Dr Chikwe Ihekweazu, also joined the VP at the event.

The photos were published in the papers and across social media platforms.

Also, the Economic Sustainability Committee was established by President Muhammadu Buhari and asked the VP to chair the Committee.

In case, you also missed the news, here’s a reminder. The Committee to be chaired by the VC is saddled with the responsibility of tackling the economic challenges and fallouts of the pandemic and the attendant movement restrictions in the FCT, Lagos and Ogun states.

The Vice President also emphasized the readiness of the Buhari administration to ensure these palliatives, mentioned in the President’s speech on Sunday, March 29, would reach poor and vulnerable Nigerians, even as the administration’s Social Investment Programmes would be scaled up.

Among these palliatives mentioned by the President, include a Conditional Cash Transfer for the next two months to poor and vulnerable households in the country, which is currently ongoing, while Internally Displaced Persons will also receive two months of food rations in the coming weeks.

As the VP stated during the Google Hangout event, the new Committee, among other issues, will also develop further palliatives, and a sustainability plan to reposition the economy.

In addition, the National Economic Council chaired by VP Osinbajo on March 20, had strongly recommended the suspension of public gatherings to tackle the COVID-19 pandemic. NEC also set up a Special Committee to coordinate Federal and State governments’ responses to deal with the fallout of the Coronavirus pandemic.  On April 1, the VP Osinbajo held a videoconference with seven State governors and the Minister of Finance under the auspices of the NEC Special Committee on COVID-19 on developing economic solutions to ease the challenges of COVID-19 on Nigerians.

That the Vice President is not the Chairman of the Presidential Task Force on COVID-19 is a non-issue. Asides from the NEC Special Committee, he is already the chair of the Economic Sustainability Committee established by President Buhari. Also, the Office of the VP, until recently, had spearheaded the Social Investment Programmes of this administration, which is a major pivot of the palliatives the President mentioned during his nationwide address. Thus, it was also natural that the VP heads the aforementioned Committee. Additionally, the VP, as the President’s deputy, is fully involved in the affairs of governance.

The Vice President was duly elected alongside President Buhari by Nigerians in 2015 and 2019. The Chief of Staff and Secretary to the Government of the Federation, who are political appointees of the President cannot be more powerful than the VP. For emphasis, the VP has not been sidelined. He continues to carry out his constitutional duties in service to the country as its number two citizen, with patriotic zeal and dedication as he has always done.

In response to your other question, President Buhari, in his March 29 speech, did offer hope and more Nigeria’s frontline workers such as doctors, nurses and others who, as you stated, are risking their lives to save others.

Among other healthcare and economic measures, including a N15bn intervention fund to address the pandemic nationwide, President Buhari, while thanking all public health workers, stated that the Federal Government has requested, through the Nigeria Governors Forum, “for all State Governments to nominate Doctors and Nurses who will be trained by the NCDC and Lagos State Government on tactical and operational response” to COVID-19.

On the unfortunate incident in Kogi State involving a state commissioner, the matter is being investigated by the relevant authorities to ensure that justice is done.

The Member of Parliament for Kpandai Constituency, Hon. Daniel Nsala Wakpal has cut sod for the construction of two dams