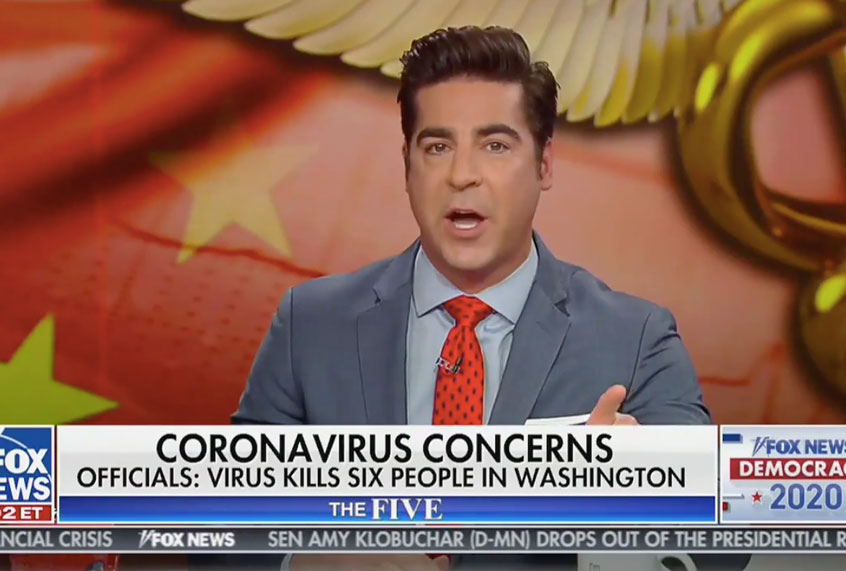 “We were slow with the testing, but very quick with the travel ban. And that’s been much more critical in saving lives,” Watters said during a March 31 episode of “The Five.”

The administration has attracted stinging criticism from public health experts and state officials, who say the dearth of COVID-19 tests has made it impossible to get a handle on the disease’s spread. But the impact of the restrictions Trump imposed ― on people traveling from China and, by March, Europe — is another story.

So we decided to dig in. We contacted Fox News to find out the evidence on which Watters based his comment but did not hear back.

Early on, those restrictions won plaudits. After the March restrictions were announced, Dr. Anthony Fauci, who heads the National Institute of Allergy and Infectious Diseases and is a member of the White House coronavirus task force, said there was “compelling evidence” to justify restricting travel from those high-infection areas.

But the implementation is another story. Global health specialists told us there is little to no evidence that Trump’s restrictions have restrained COVID-19 ― they came too late and didn’t have the follow-up necessary to make a real dent. By contrast, they said, better and earlier testing could have saved countless lives.

The wrong approach at the wrong time

Targeted, quick travel restrictions can be part of the public health arsenal to control the spread of an illness such as COVID-19.

The idea is to stop people in hot spots from carrying the virus to uninfected areas. The restrictions also tamp down the risk that an infected traveler will expose others in the closed quarters of an airport, airplane or other mode of transportation.

But the experts we spoke to made clear that these restrictions can work only as one (smaller) part of a comprehensive strategy. Without other aggressive public health measures, they would have little value. The timing of American restrictions — and how they interacted with other domestic efforts ― rendered them ineffective.

For context, the incidence of a severe respiratory illness began to emerge in China late last year. These cases were confirmed to be a novel coronavirus by Jan. 7, and the first American case was reported Jan. 20 — almost two weeks before any travel restrictions were in effect.

Expanded travel restrictions took effect March 13 and 16 to include people in Europe, including the United Kingdom and Ireland.

Experts told us those measures represented the wrong approach at the wrong time.

“When the travel ban was put in place, the risk of importation from China was quite small,” said William Hanage, an associate professor of epidemiology at the Harvard T.H. Chan School of Public Health.

For one thing, China had also put in place its own limitations on travel ― limiting travel to and from Wuhan starting Jan. 23. And, by then, there were already several cases of COVID-19 across the United States and in other countries that had not been targeted by restrictions.

And while European cases shot up in early March — particularly in Italy ― even those travel restrictions were misplaced, Hanage said. At that point, Americans already faced a domestic threat from the virus.

So was the administration “very quick” with a travel ban? Not really.

If anything, the travel limitations gave people “a false sense that something with a big impact was being done,” said Jennifer Kates, a vice president and global health expert at the Kaiser Family Foundation. (Kaiser Health News is an editorially independent program of the foundation.)

That false security, others said, distracted from the reality that more essential precautions weren’t in place.

Well-implemented travel restrictions can buy time on the margins, research suggests. But that time has to be used effectively — to ramp up emergency preparedness and bolster activities like testing and isolating people who may have been exposed.

And there is no way to know if the administration’s initial travel restriction ― barring people who had been to China — reduced the spread of the coronavirus.

That’s because the administration limited testing for the virus to people who were sick enough to be hospitalized or who had been to Wuhan recently. Those are people with a heightened risk of exposure and not representative of the broader swath of people affected by the travel limitations, said Jennifer Nuzzo, a senior scholar at the Johns Hopkins Center for Health Security.

“Had we expanded testing during this time and still found few cases, I would be more convinced that the travel ban had an impact. But we didn’t.”

A March 20 analysis run by Think Global Health, a project of the Council on Foreign Relations, compared countries that did and didn’t restrict travel with China. The researchers found no correlation between travel restrictions and preventing a pandemic outbreak.

That last part is crucial ― travel restrictions may have bought time, but that mattered only if countries actively fought domestic spread.

Other research backs that up. A paper published in Science last month found that when China imposed its own travel restrictions, it made only a modest difference in curbing the spread of the coronavirus, both domestically and to other countries — at most, buying a few days’ time. And, this paper also notes, travel restrictions were effective only when coupled with other efforts to halt transmission.

By contrast, researchers were unanimous in noting the effectiveness of robust testing of people who may have been exposed — and then isolating those who test positive for the virus. This test-and-quarantine approach has been proven effective in South Korea, which experienced its first case on the same day as in the U.S. but where the number of new COVID-19 cases is now on a dramatic decline.

If you could pick only one strategy ― travel bans or testing — the choice is clear, Nuzzo argued.

“We don’t have any evidence that travel bans did much to stop or slow the spread,” she said. “Conversely, testing is essential. Had we been better able to find and isolate cases and traced their contacts, we could have kept case numbers down.”

The World Health Organization makes a similar point: It says temporary restrictions are justified only in narrow circumstances and as a way to buy time. But that time, the organization says, must be used to “rapidly implement effective preparedness measures” ― like testing.

Another point that supports this position: the real-world experience unfolding in the United States.

The “travel ban didn’t work,” said Lawrence Gostin, a university professor at Georgetown Law who specializes in global health law. “This is self-evident, because the U.S. is now the global epicenter.”

Arguing in support of the White House coronavirus response, Watters said the United States was “very quick with the travel ban” and that was “much more critical in saving lives.”

This is incorrect. Travel restrictions could have bought a bit of time. But they were instituted after the coronavirus had already entered the United States.

And the evidence at hand suggests travel restrictions are most effective in combating viral spread if they are accompanied by targeted, robust testing and quarantining, which are the areas in which the administration stumbled. If you were to pick only one area to excel in — testing people for the coronavirus, or travel restrictions ― experts told us the research clearly supports testing, even without travel bans.

Watters’ claim has no factual basis and misrepresents real-world evidence on multiple levels. We rate it False.

This story was produced in partnership with PolitiFact.