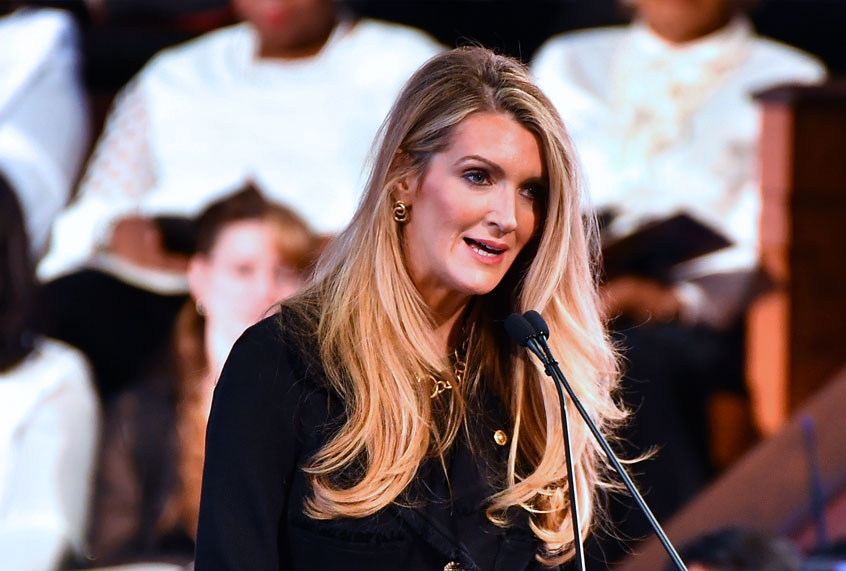 Sen. Kelly Loeffler, R-Ga., sold more than $46,000 of stock in an online travel company shortly before President Donald Trump announced a ban on flights to Europe over the coronavirus pandemic.

Loeffler and her husband Jeffrey Sprecher, an executive at the firm which owns the New York Stock Exchange, purchased shares in Booking Holdings on March 6, according to Bloomberg. Loeffler traveled with Trump to the Centers for Disease Control and Prevention headquarters in Atlanta that same day, and she later sold the stock with her husband on March 10 and March 11. The president announced his European travel ban on March 11.

Booking Holdings describes itself on its website as “the world’s leading provider of online travel & related services, provided to consumers and local partners in more than 230 countries and territories through six primary consumer-facing brands.” It helps customers book flights, hotel rooms and other travel-related services through its online platform. The company suffered financially after Trump announced his European travel ban, with its stock plummeting as a result of the pandemic.

This is not the first transaction by Loeffler and her husband to raise allegations that the Georgia senator engaged in insider trading. The pair sold stock in Intercontinental Exchange on three separate occasions between Feb. 26 and March 11, culminating in $18.7 million in stock sales during that period. The couple also sold stock in retail outlets like Lululemon and T. J. Maxx, which decreased in value as the pandemic worsened, and purchased stocks in DuPont, which manufactures COVID-19 protective garments, and in Citrix, a telecom company that has profited amid an uptick in telecommuting.

At the time that Loeffler was selling stocks in companies that would suffer from a pandemic-related economic crash, she tweeted support for Trump’s policies, including writing that “Democrats have dangerously and intentionally misled the American people on #Coronavirus readiness. Here’s the truth: @realDonaldTrump & his administration are doing a great job working to keep Americans healthy & safe.”

If Loeffler sold stocks based on insider knowledge, she would be in violation of the STOCK Act of 2012, which prohibits senators from using privileged knowledge for personal financial gain. Loeffler’s campaign claims that an investment firm manages the couple’s stocks, and the senator is not personally involved in day-to-day trading decisions.

“I think that this definitely adds more fuel to the fire around concerns about insider trading for her,” Donald Sherman, deputy director at the watchdog Citizens for Responsibility and Ethics in Washington, told Salon on Friday. “There has been a conversation in the good government community about whether members should own or trade stocks for a while and Sen. Loeffler is becoming the poster person for why it’s not just bad for the Congress, but bad for good government to have members buying and selling stocks.”

“This confirms that her conduct needs to be investigated by the Senate Ethics Committee, and any federal law enforcement agencies that have jurisdiction over insider trading,” Sherman said. “It’s obvious that at least some of the sales were made after she got a private briefing on Jan. 24, and some of those sales were made before Feb. 28, when she was attacking critics of the administration’s response to the coronavirus and still saying that the Trump administration was ‘doing a great job and working to keep Americans healthy and safe.’ So there’s certainly a question to be raised there.”

Loeffler is not only the senator whose stock trades have been met with scrutiny. CNN reported earlier this week that the Federal Bureau of Investigation (FBI), which is coordinating its probe the Securities and Exchange Commission (SEC), reached out to Sen. Richard Burr, R-N.C. His lawyer responded that Burr “welcomes a thorough review of the facts in this matter, which will establish that his actions were appropriate.”

Fox News host Tucker Carlson denounced Burr’s stock sales last week, telling his viewers that Burr seemed to have “had inside information about what could happen to our country, which is now happening, but he didn’t warn the public. He didn’t give a primetime address. Didn’t go on television to sound the alarm. He didn’t even disavow an op-ed he had written just ten days before claiming that America was, quote, ‘better prepared than ever for coronavirus.’ He didn’t do any of those things.”

The Vanguard 529—a premier plan that’s setting the pace

We All Need Happy Hour with Meryl Streep, Christine Baranski, and Audra McDonald

Listen to article Fame, wealth and success doesn’t come easy and those who have all the three would have toiled