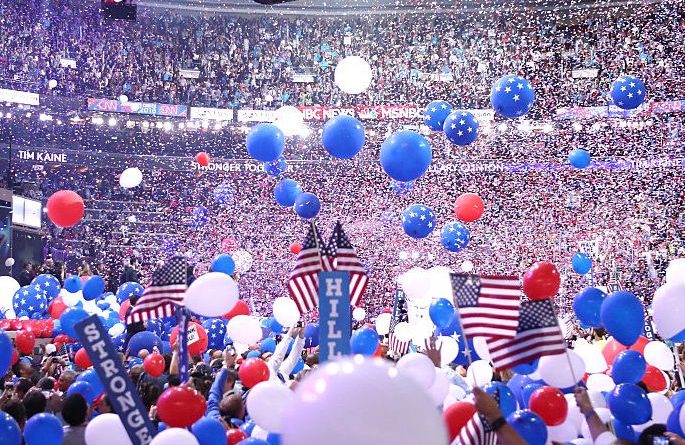 The 2020 presidential election is in full swing, and as the country wonders aloud who will be the official Democratic candidate challenging President Trump, it’s only natural to start looking ahead.

So in the spirit of planning, here’s a guide to everything you need to know about the 2020 Democratic National Convention because, like it or not, it will be here before you know it.

Due to the coronavirus pandemic, the DNC in Milwaukee, Wisconsin has been moved to the week of August 17th. It was originally scheduled to take place from July 13 to July 16. The New York Times reports that a senior Democratic official said the event could be a “bare minimum” convention with people potentially staying away because of the health crisis or because they have other plans for that time.

The party’s decision to hold the convention in Wisconsin is significant as Democrats did not win the state in the 2016 presidential election, the first time the party lost the state in three decades, according to the Times.

Your Guide to the 2020 Democratic Primary Debates

As Politico reported, “Wisconsin has embodied the party’s failures in the 2016 presidential race. Clinton felt so confident in capturing a state that Barack Obama had claimed that she bypassed it in the general election campaign. Trump then won it by less than 25,000 votes, the first time the state had gone red in a presidential contest since 1984.”

The actual convention, where the party will choose its 2020 nominee, will be held in the Fiserv Forum, the arena where the Milwaukee Bucks play. CBS reports that this is the first time the DNC has been held in the midwest (beside Chicago) since 1916.

How can I stay up to date about the convention?

When the Democratic National Committee announced the location for the convention, it also announced that anyone can text CONVENTION to 43367 and to be kept up to date about the goings on of the DNC.

When and where is the 2020 Republican National Convention?

While it’s pretty obvious who the Republican 2020 nominee is going to be (it rhymes with stump), you might still be wondering when the party will be holding its official convention. The 2020 RNC will be held in Charlotte, North Carolina from August 24 to August 27.

Barrett’s remarks about judges not being “partisan hacks” were “straight-up trolling”: legal analyst

Condiments with some chill: CBD enters the world of sauces

A total of 615 teenage pregnancies were recorded between January and December last year. Mr. Kwaku Bio, the Wenchi Municipal