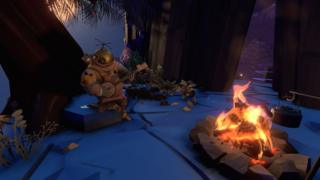 The title’s writer Kelsey Beachum credited its players saying: “Word of mouth has been essential in getting people to play the game, you’re all really beautiful”‘

The game where you explore a distant galaxy under threat from an exploding star claimed three awards in total.

It also won in the best design and original property categories.

It was a successful night for role-playing detective game Disco Elysium which also picked up three awards – winning in the best music, debut game and best narrative categories.

This year’s award ceremony had to be pre-recorded because of coronavirus restrictions.

Host Dara O’Briain pulled the strings from his house with every nominee required to submit a winners speech – just in case they won.

There was disappointment for mysterious adventure game Control.

It had 11 nominations going into the event and only won once.

Martti Sussalo was rewarded for his role in the supernatural title – he picked up a golden mask in the performer in a supporting role category.

Call of Duty: Mobile won the EE Mobile Game of the Year, the only award to be voted for by the public.

Japanese game designer Hideo Kojima, creator of the Metal Gear franchise, was honoured with the Bafta Fellowship – the highest accolade the organisation can give.

The fellowship recognises exceptional contributions to the gaming industry.

In an emotional video message he dedicated the prize to his parents saying: “My determination is stronger than ever.

“For the rest of my life i will continue to devote myself to creating for others.

“Games are holding their own next to films. or perhaps fusing together with them, evolving into a huge medium of digital entertainment”.

His latest release, Death Stranding, was nominated for 11 awards and won only one award for technical achievement.

The game was Kojima’s first release since leaving his former employer Konami to set up his own studio.

The Bafta winners in full were:

Performer in a Leading Role: Gonzalo Martin (Life is Strange)

There are many people across the world living in lockdown at the moment and it’s thought that as a result more people are turning to gaming as a way to pass the time.

There are reports that games platform Steam is seeing record figures, streaming sites Twitch and YouTube Gaming have increased viewership and Animal Crossing has become the fastest selling single game in the history of Nintendo’s Switch console.

The Games Awards were an opportunity for the industry to showcase the variety of experiences gaming offers as a way to appeal to a broader audience.

With big blockbuster franchises like Call of Duty and niche independent titles like Untitled Goose Game winning golden masks , the industry will no doubt feel like it’s made the most of the opportunity to open up gaming to new faces. 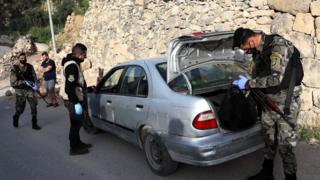