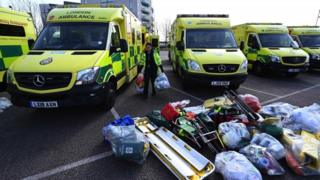 The NHS has confirmed it is teaming up with leading tech firms to ensure critical medical equipment is available to the facilities most in need during the coronavirus outbreak.

It blogged the firms would create computer dashboard screens to show the spread of the virus and the healthcare system’s ability to deal with it.

These will draw on data gathered via 111 calls and Covid-19 test results.

The first should be made available to government decision-makers next week.

Four tech firms were named in the blog. Three are US-based: Microsoft, Google and Palantir. The fourth is Faculty AI, which is headquartered in London.

Amazon was not referenced but the BBC has confirmed that it is also involved. The omission was an oversight, and the NHS intends to add details of the company’s role later.

Many of the details of the scheme were first reported by the BBC on Thursday.

The blog confirmed that NHSX – a unit responsible for digital innovation – was heading the effort to harness a range of data sources, so that they could be used in combination.

The aim is to create dashboards that draw on the information as soon as it becomes available in order to help the government and health chiefs to:

It added that the information would “largely” be drawn from existing data sources, and would be anonymised so that individual patients could not be identified.

In time, it said, the aim was to provide a separate dashboard that could be viewed by the public.

Regarding the tech firms, it said:

“Microsoft remains steadfastly committed to supporting the NHS every way it can at this critical time,” Cindy Rose, the firm’s UK chief executive said.

Privacy campaigners had raised concerns after details of the initiative leaked earlier in the week.

In particular, they questioned the involvement of Palantir, which has become controversial for its role in helping Immigration and Customs Enforcement (ICE) agents track and deport undocumented immigrants from the US.

– what’s the cost
– what’s the cost benefit analysis
– why all 4
– what data, whose and how much
– is there consent/ transparency
– what decisions
– any secondary purposes
– what’s the long term plan
– how ‘anonymous’ https://t.co/VTc7Ol8fug

The NHS is partnering with Palantir, of ICE fame, for data management and analytics in the corona crisis. A break for Palantir in the UK – and a somewhat risky choice for the NHS. Would love to see the due diligence on this. https://t.co/9YEYCCQYGv

The NHS sought to offer reassurance on the matter by saying that the code and data involved would be made “open source wherever we can”, meaning that digital rights experts should be able to check the extent to which people’s records were anonymised.

In addition, the health service stressed that it would remain in control of the records, and not the tech companies.

“Once the public health emergency situation has ended, data will either be destroyed or returned in line with the law and the strict contractual agreements that are in place between the NHS and partners,” it added.

The blog made no mention of a contact-tracing app that NHSX is also believed to be developing.

Other nations have already deployed smartphone software to help identify recent contacts of people found to have Covid-19.

The Information Commissioner’s Office indicated on Friday that such an effort would be lawful in the UK.

“Public bodies may require additional collection and sharing of personal data to protect against serious threats to public health,” it said in a statement.

“Data protection law allows that to happen in the public interest, and also provides the safeguards for personal data that people would expect.” 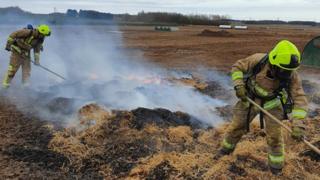 4+4 is already achieved is a done deal

Raph Odua has suddenly become a noise maker. Those people that used to comment on his posts have discovered that all his alligatiions and accusations are myopia and lack substance. He doesn't even know how to be an informed critic

Hmm oga u dey see so, I hope you are not blind shall

You have eyes but cannot see,Obaseki is a promise keeper,numerous projects executed by this administration across the state are verifiable.

Let your Oshomole free Obaseki to rule, Oshomole has completed his tenure let him stay aside

Can Governors like Makinde of Oyo State, Wike of Rivers State, Ganduje of Kano State, Tambuwal of Sokoto State, Elrufai of Kaduna State, Obiano of Anambra State et al be scared of Direct Primaries? It is a NO. That is because they have full control of their parties structure in their respective States

Obaseki should stop using the pandemic as an excuse, as reason why he is against Direct Primaries. The truth is Governor Godwin Obaseki doesn't have any grip on the structure of his party in his state. Is he telling us he is not going to campaign if the pandemic lingers till campaign period if he gets the ticket of another party?

Spare us the flimsy excuse jor!

Foolishness and confusion of the highest order is when u criticised and called Ize Iyamho names against Obaseki in last election and u are now condemning and calling Obaseki names against Ize Iymho. I hope JAS and his likes with intellectually shallow mind will receive sense.

Which one of the mentioned States's Governors has an overbearing predecessor that thinks the sun must rise from his compound like we have in Edo State. Governor Godwin Obaseki is fighting for the soul of democracy in Edo State. Don't tell me he came into office through the instrumentality of any body. The great President Umaru Ya'ardua of blessed memory had queried the election that brought him to power.

Obaseki is a political neophyte. How on earth does he think he can win primary election from the party members who hail from LGAs where those legislators he locked out of the state assembly come from? It’s just not possible. He should start packing his loads.

Happy Birthday to You

Happy birthday Pastor. God bless you on your added year

Edo state needs a man to move the state forward and the man we need is Pastor Osagie ize-iyamu ( POI) of APC.

Pastor Osagie ize-iyamu is a blessing to Edo state.

I can not support this man ooo

People of Benin live obasik governance to continue.benin is not a Lagos state ooo

Izi iyamu is a day light full with darkness,Edo is already in progress

No way for POI. Na Godwin

Hunger show on the poster face.

This man will be buhari of Edo state when he find his way to government house. High quest for power without reasonable better idea .

Looking for attention to ease his stress

Esan man campaigning for oshiomole's candidate! What a shame!

This boy you again 🤺🤺

Miss up guy,pastor should anoint u as his assist and campaign for Jesus all over the world

Politics and politiking stereo different things. The man is politiking. Hr has the constitutional right to vote against even his own biological father without sentiment. It is about ideological variations, actualization of interests and polarization of opportunities.

You better go an d buy sense. You POI. Don't have any thing to offered.

Why are you in support of POI

So,he is no longer a thief, according to una Orga?