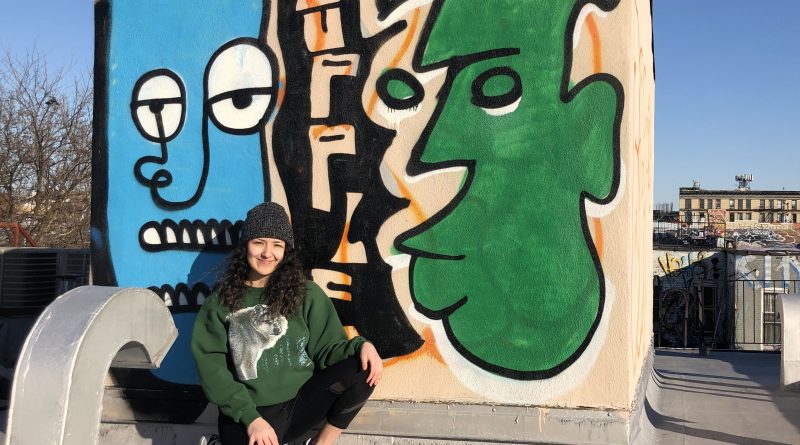 Jeremy Cohen had been stuck inside his Brooklyn apartment for a week when he first saw her. She was dancing on a rooftop across the street wearing a forest-green sweatshirt emblazoned with a wolf. A grey beanie covered her dark brown ringlets. She grinned at him. Even from 60 feet away, she radiated good energy. He really wanted to ask her out, but with social distancing orders in effect, how could he?

Then he had an idea. Cohen jotted his phone number down on a piece a paper with “Text me?” and taped it to his DJI mavic drone. He carefully navigated it off his balcony and up, up, up.

The curly-haired girl jumped up and down in excitement when it landed at her feet.

Tori Cignarella had been cooped up in her own Brooklyn apartment working and binging Netflix with her roommate. The days were starting to blend together; It was time for a dance break and some fresh air. She peeled off her pajamas, threw on her favorite funky pullover from the Brooklyn Flea market, and headed to her building’s roof.

She was in the middle of learning the “We’re All in this Together” dance from High School Musical when the drone landed. The boy who sent it from across the street seemed sweet. They’d waved at each other earlier, and she’d seen him fiddling around with it. This was the most exciting thing to happen to her in weeks.

Tori Cignarella on her roof.

The novel coronavirus that has infected more than 54,453 people in the U.S. has made finding love more complicated than ever. In this fraught new era of dating—one without bars and parties and meet-ups—millennials are relying solely on digital dating for romance. Apps like Bumble have reported a significant uptick in usage in cities with shelter-in-place mandates, and first-time drinks via FaceTime are the new norm.

But social distancing has made it difficult for people like Cohen, a 28-year-old freelance photographer from Brooklyn who shies away from online dating. “I usually meet people in person, because I want to let my personality shine, as opposed to being judged before someone gets to know me,” he tells ELLE.com. “I’m a hopeless romantic, so obviously this has made it nearly impossible to meet people.”

Giving Cignarella, a 23-year-old community associate for a coworking space, his number via drone was the closest to IRL flirting he could manage in isolation. “I was worried it might come off as desperate or creepy,” he says. “But, hey, we’re living in desperate times!”

Because this is 2020 and TikTok reigns supreme, Cohen filmed their meet-cute and uploaded it to the video app (with Cignarella’s permission), where it’s been viewed over 26 million times. He saved her number in his phone as “quarantine cutie” and asked her out on a virtual date, which he also filmed and put on TikTok.

“I was so excited,” Cignarella tells ELLE.com. “The scenario was so cool, like I wanted to give it a shot, because how often do you find yourself in this situation? If anything it just goes to show that if people want to put the effort in, they will. Even during social distancing, they’ll go the distance, in this case literally, to show interest. He’s set the bar high!”

Their first date was from a distance, of course, but both Cignarella and Cohen say it was a success. They got dressed up and headed to their respective roofs, where they’d set up tables. They heated up frozen meals and cheersed with red wine. “You look beautiful!” he shouted at her. She couldn’t hear him, so they jumped on a FaceTime call to talk.

“It went really well!” Cignarella says. “When this is all over, I’d meet up with him in person. At the very least, if nothing comes of it romantically, I’ve gained a friend.”

Bad reporting on the economy is ennobling Trump