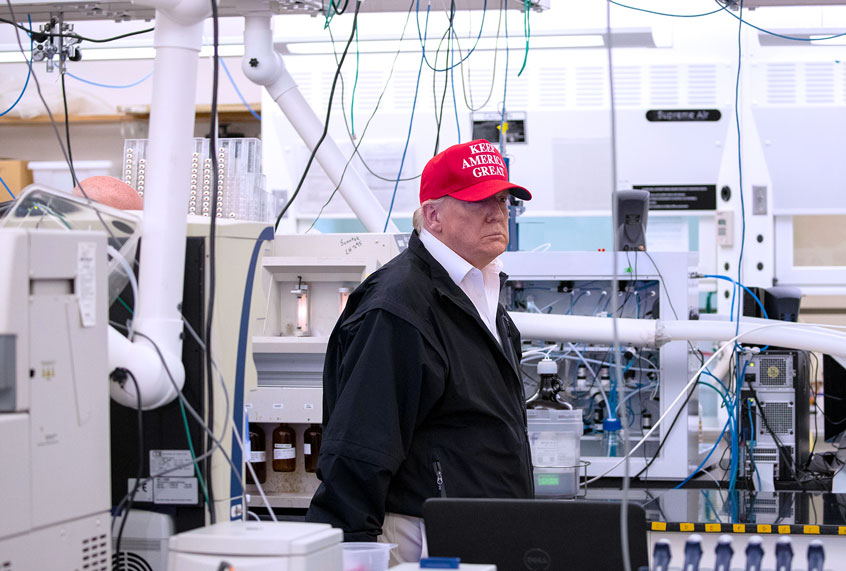 A compelling and coherent narrative is finally emerging to explain the Trump administration’s flailing response to the coronavirus crisis.

And it should become an explicit element of every incremental story about the crisis going forward.

In short: Trump bet on containment rather than mobilization. It was a bad bet. But in Trump’s mind, it was a “tremendous success.” As a result, top health officials fearful of his wrath assured him it was working, rather than preparing for its inevitable failure. Now Trump is fully invested in making coronavirus appear to disappear, even as it continues to spread. But the only way to do that is to slow-walk testing, put a chokehold on the release of information, repeatedly insist that everyone says he’s doing a good job and hope for a miracle.

Where we are now is the result of Trump’s bad judgment, compounded by extreme, obsessive vanity — and an executive-branch culture in which officials are too terrified to contradict him.

And make no mistake: his subordinates remain under clear orders to make it all go away. As he put it last week: “We have done an incredible job. We’re going to continue. It’s going to disappear. One day — it’s like a miracle — it will disappear.”

Time Magazine’s Vera Bergengruen and W.J. Hennigan reported this out with enviable clarity, writing that Trump’s moves to keep coronavirus out of the United States were doomed from the get-go, despite his constant assurances that it was working.

But it wasn’t, and the administration’s rosy messaging was fundamentally at odds with a growing cacophony of alarm bells inside and outside the U.S. government. Since January, epidemiologists, former U.S. public health officials and experts have been warning, publicly and privately, that the administration’s insistence that containment was — and should remain — the primary way to confront an emerging infectious disease was a grave mistake.

What those experts told Bergengruen and Hennigan is that Trump’s decision on Jan. 31 decision to block the entry of foreigners from China and quarantine Americans returning from there was not in itself a bad idea — but only to the extent that it bought some time to put together an effective response.

An effective response, experts say, would have required that administration officials capitalized on the temporary delay of new infections offered by containment strategies in order to aggressively prepare for inevitable outbreaks. But not one of the dozens of experts, doctors or former public health officials who spoke with TIME thought that the Trump administration used that delay effectively.

Experts say the U.S. response is now likely weeks — if not months — behind schedule.

New York Times op-ed writer Michelle Goldberg cut right to the heart of it in her Friday column:

[I]t seems as if in the midst of this burgeoning crisis, we’re seeing a coordinated, whole-of-government campaign to protect the president from being contradicted.

Going forward, Trump administration officials are still under pressure to only say things that fit into Trump’s fantasy narrative, which he described at that first, largely incoherent, coronavirus briefing on Feb. 26:

We have, through some very good early decisions — decisions that were actually ridiculed at the beginning — we closed up our borders to flights coming in from certain areas, areas that were hit by the coronavirus and hit pretty hard.  And we did it very early.  A lot of people thought we shouldn’t have done it that early, and we did, and it turned out to be a very good thing.…

Because of all we’ve done, the risk to the American people remains very low.…

And again, when you have 15 people, and the 15 within a couple of days is going to be down to close to zero, that’s a pretty good job we’ve done.

Eight days, roughly 500 cases and at least 21 deaths later, Trump answered questions about coronavirus during Thursday night’s Fox News town hall by repeatedly insisting that his performance was being widely praised — saying so six times in one three-minute stretch:

Well, actually, we were giving — I think really given tremendous marks — if you look at Gallup poll, you look at other polls — for the way we’ve handled it.…

[W]e’ve been given rave reviews….

So we were really given tremendous marks…

Again, we’ve gotten the highest poll numbers of anybody for this kind of a thing. …

We’ve been given A-pluses for that….

Well, I think people are viewing us as having done a very good job.

That is what matters to him more than anything — the opportunity to brag about external validation, whether or not it actually exists.

So some officials will continue to enthusiastically parrot what Trump says, regardless of the possible effects on their credibility or the country, in order to keep the boss happy. Economic adviser Larry Kudlow is flatly in that category, as journalist and pandemic expert Laurie Garrett noted on Twitter:

As long as Trump refuses to let anything interfere with his fantasy, the government’s response to this public health crisis will remain grossly inadequate.

Long after the virus is gone, the trauma from quarantine will linger