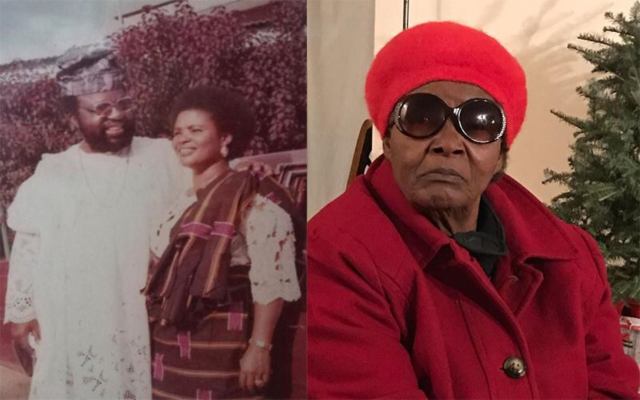 Amb Princess Asha Okojie until now has ‘remained silent about the decades of a fight between her father and mother. She has however decided to talk about her growing up in a polygamous family.

“I was born into a polygamous family, my mother, Mrs Lucy Okojie was married off at the age of thirteen, the third of four wives and circumcised by my father’s first wife before she was put in the family way. At first, my childhood seemed normal all that changed when my siblings and I were abandoned by my father, due to favouritism in the family. As a mother, when I look back, I believe my dad never loved us, he only used my mother’s who is 24 years younger and a successful businesswoman to enrich himself and after mismanaging my her businesses, he sold her properties to take care of his flamboyant lifestyle. It got financially bad for my mother that we would eat boiled coagulated cow blood, fried onions and red oil with cocoyam or sometimes went to bed hungry.

At times, I would go fruit hunting with my bike in the neighbourhood, while my dad who was a mover and shaker in town would drive past me with his current wife in the car and pretend he did not see me even when I waved at him. Our living conditions was so bad that my siblings and I would walk a mile to beg for feeding money in his office at my stepmother’s house, only to be told by his secretary he was too busy to see us, when we refuse to leave he will say to us “go to your mother, I am not your father”. For nine years old, those words hurt and cut deep inside, but never made me bitter. My only regret was trying to earn the love of a father all these years who was never there, not even on my birthdays. What he denied us he gave to others. I never understood why he hated us so much to the extent of supporting my sister’s political opponent during her run for the house of representative in Uromi.

Thank God for my mother, through the ups and downs she stood by us and never left. The question, I often ask myself was if late Chief Anthony Aneni, Chief Gabriel Igbinedion or my uncle late Chief Anthony Enahoro, his friends at the time would do half of the things he’s done to us? Never, because they always put their family first. Ironically when he almost went bankrupt, my sister whom he refused to support during her political aspiration, as a former politician, was the one that helped him to get back the money that was frozen and avoided being arrested by the government, but he has forgotten all the good we did for him, not to mention the other stuff. All he ever sowed in this family is division amongst his twenty-six children, there are some of my siblings that we only know from a distance and that’s about it. Do not get me wrong, we still regard him as our father, but because of his ego and pride, he has never apologised for denying us as his children. I remember when growing up people would look at us and ask “are you Okojie?” When we say yes they would say “oh we don’t know you guys, we only know the children of the wife he lives with.” I became shy and withdrawn. My dad has never called to wish us a happy birthday or agree to accept our invitation to celebrate his birthday with us. We grew up knowing that we had one we never knew, but God has been our father and has given us the grace to be here today. Although I have forgiven my father for all that he has put us through, I will not let him continue to harass and intimidate my mom who has gone through so much in her life as a victim of child marriage and Female Genital Mutilation. She is a grieving mother who has never been able to get over the death of my three siblings, whom my dad never grieved.

They say charity begins at home, my life’s work has been about women and youth empowerment, it is a shame that my own father who is 98 years continues to use his position and influence in the society to oppress, intimidate and harass my 75 years old poor mother, after years of physical and psychological abuse, which is everything that I stand against. How do you take away the childhood of a thirteen-year-old girl, who had have eight children by you, then prevent her from going to college to achieve her dreams and now you are taking her to court over the only house she has left because your reason is that your children are all grown and have left home when you are fully aware that my mother built the house as a family home for her children?

I believe this International Women’s day is a time for reflection. Not only to celebrate women but to construct plans on how to do more to protect our young girls and women from emotional and physical abuse, instil self-esteem, self-worth, values and confidence in them by empowering them to become more productive citizens. My circumstances may be different but it is all too familiar in Nigeria, where children are abandoned by either their father or mother or both parent and left at the mercy of ignorant helpers due to poverty or broken dysfunctional homes. There are cases where women do not have the rights to their properties when their husband passes away. Often they are pushed out of their family homes, or their properties are taking away from them by relatives.

Our mothers have been the workforce of this country, especially in the villages. They till the ground from morning till dawn, and at the end of the day, they are treated badly by their husbands or family members. It’s a shame that the law does not do enough to protect women and children’s rights in this country that is supposedly the giant of Africa. No child should go through what I went through growing up and no mother should suffer in the hands of her husband to the extent where he believes that everything she owns belongs to him, or that women are considered worthless or useless after the childbearing age. In today’s society, juvenile delinquencies are as a result of social-economic issues mainly due to children being abandoned or neglected by their parents. Left to roam the streets, or explored as child labour depriving them of having the basic education.

I was fortunate to have a praying mother, who believed in us and devoted her life to raising us. My message to my dad (like I wrote in my first letter to him at ten): I will say to you, bring peace and unity to your family. You cannot be a father to other people or a role model to others when you have failed to manage your own home. Your decisions and actions have destroyed the foundation of this family. Ask yourself what legacy do you want to leave behind? In the end, is it worth it? How do you pick up your bible every day to go to church, but have no conscience in your heart? God has given you a long life, for such a time as this to bring your family together. Like I said, your actions are an embarrassment to the legacy of the King Ogbidi Dynasty”