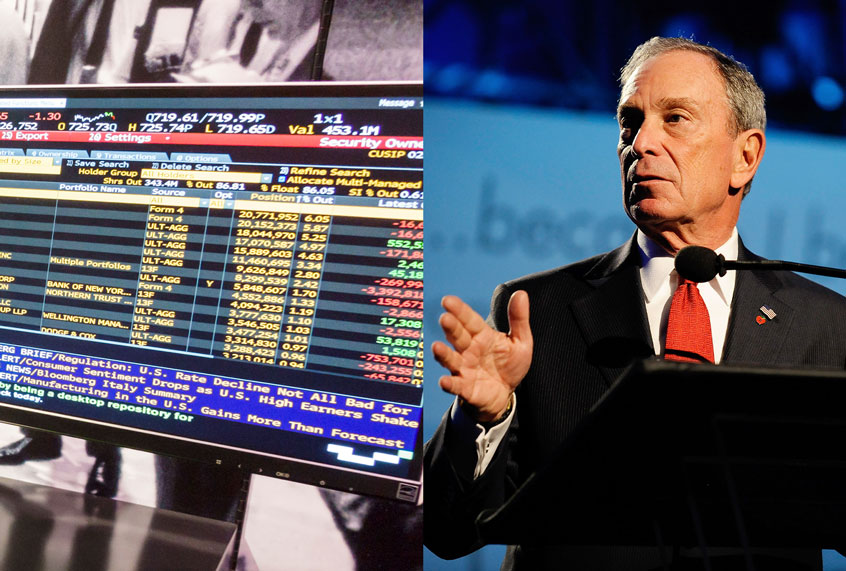 When wealth accumulation is your only guiding ideology, it is easy to overlook inconvenient facts; as it is for former New York City Mayor Mike Bloomberg’s long-standing blind spot for China and its authoritarian political system.

For decades, as the bi-partisan neoliberal global free trade imperative took hold, Americans were told by political elites that, with a firehose dose of capitalism, China would lose its authoritarian edge.

Yet, we see in the unfolding coronavirus saga, a Chinese government that punished Dr. Li Wenliang, an ophthalmologist for trying to warn local health officials about the coronavirus he had caught while working at the local hospital. He was accused by security officials of “making false comments” and “severely” disturbing the “social order.”

When he died, he was hailed as a hero.

To understand why it has always been essential for Bloomberg to keep the blinders on regarding China, keep in mind his $64-billion-dollar fortune is based on building a global network of Bloomberg terminals that provide real time pricing information for financial assets, commodities and currencies.

You can’t dominate the world of financial information technology without the leadership of the world’s second largest economy being on board.

Perhaps, more than any other one individual it has been Bloomberg that has been driving the trend of global financialization, via his invention of the finance industry’s nervous system. Reportedly the eponymous billionaire’s trading terminals cost $24,000 a year to subscribe to back in 2013.

Through the Bloomberg Terminal, Bloomberg has wired the world in away that rations out access to financial information based on who will pay the most for it — month after month, year after year.

Of course, like everything else about the black box that is the closely held Bloomberg LP terminal, the actual pricing of access to the global service is a company secret.

“The billionaire, whose core business sells financial services to investors, has led efforts since 2015 to make it easier for U.S. companies to trade in Chinese currency, a move embraced by China’s largest banks,” reported the Washington Post’s Michael Kranish.

According to Kranish’s reporting, China accounts for one percent of Bloomberg LP’s revenue and neighboring Hong Kong accounts for four percent. Taken together that’s five percent total of the company’s $10 billion in annual revenues.

If elected president, Bloomberg has committed to placing his company in a blind trust. The trustee would then sell it, with the proceeds going to Bloomberg Philanthropies.

But a blue light special sale of his assets won’t undo the damage that Bloomberg worldview’s done.

Bloomberg sided with the Wall Street robber-barons that pillaged MLK Boulevard and Main Street in 2008. He went out of his way to ingratiate himself with China’s authoritarian President Xi Jinping, even as pro-democracy street protestors put their lives on the line in Hong Kong.

In September he sat down with PBS’s Firing Line and had words of praise for China’s efforts at combating climate change and the responsiveness of the top leadership to the needs of the people.

“The communist party wants to stay in power in China and they listen to the public,” he said. “When the public says I can’t breathe the air, Xi Jinping is not a dictator — he has to satisfy his constituents or he’s not going to survive.”

Now, the U.S., indeed the entire world, is entirely reliant on an authoritarian government to provide transparent real time information on how well they are combating a dangerous epidemic they did their best to deny was happening for weeks.

And thanks to the global capitalist imperative that dominates our lives, the U.S. faces the prospect of a pharmaceutical shortage of life saving drugs because of the shutdown of production of them in China.

“When the United States was negotiating trade agreements with China we didn’t pay nearly enough attention to issues like human rights, labor rights, health care, transparency, or environmental rights,” said James S. Henry, an international business expert and Global Justice Fellow at Yale. “We were frankly in a big hurry to grab the gold — and, indeed, our companies and banks have made a lot of money investing in China,”.

He continued: “To some extent we are now seeing the long-term consequences of turning a blind eye to these matters. As an authoritarian regime whose GDP has increased nearly 8 times in size since the SARS epidemic of 2002-4, China’s lack of transparency, combined with this growth, may well have contributed to the fact that this epidemic has gotten so out of control. To this date, we cannot really be sure that China’s public health data on how well they are containing this coronavirus are accurate.”

And as for just how much we were going to use free trade to “bring the Chinese towards the light of Democracy” — all you have to do is listen to the current occupant of the White House, who also vilifies whistleblowers, to know this is another really big idea the elites got very wrong.

Former COVID-19 data chief: Outbreak is “much worse” than DeSantis administration lets on in Florida

Nadiya Hussain isn’t trying to blend into the food world anymore: “Why not just create space?”

PHOTOS: Sanwo-Olu, Aregbesola, Oba of Lagos, others at stakeholders engagement on security