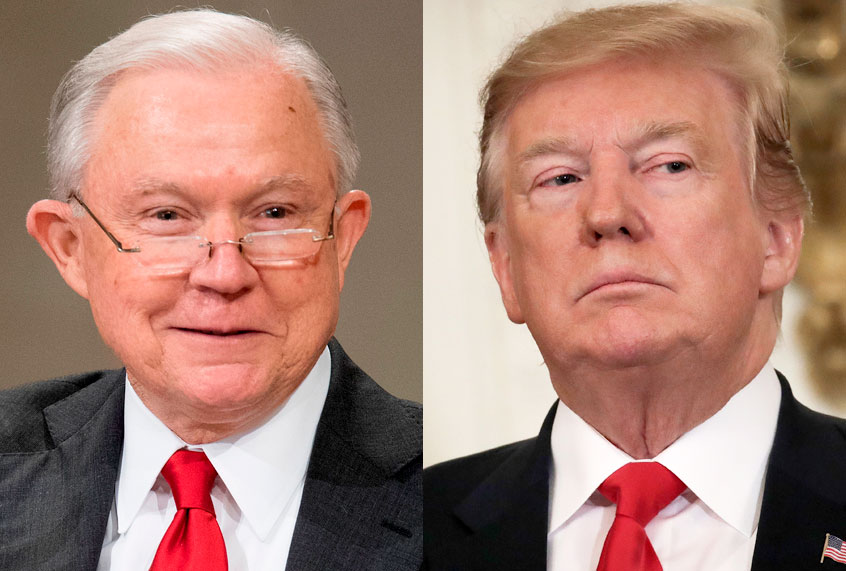 According to a report from USA Today, Jeff Sessions’ campaign to reclaim his U.S. Senate seat –after leaving it to serve as Attorney General under Donald Trump — is being slowed because the president refuses to endorse him, likely due to their stormy relationship.

The report notes that Sessions is now faced with running against Democrat Sen. Doug Jones who has the advantage of incumbency, as well as several popular figures in Alabama seeking the GOP nomination, too.

USA Today reports that, behind the scenes, White House aides are imploring the president to weigh in on the race over fears the Republican Party might not gain back the seat in what is expected to be a high-turnout election with the balance of power in the Senate at risk.

“Now Sessions finds himself in a neck-and-neck race in the GOP Senate primary on Super Tuesday, where he and others compete to challenge incumbent Democratic Sen. Doug Jones in November,” the report states. “But above that, Sessions has been forced to reckon with his complicated history with Trump in a race that has focused on the president and the approval of his loyal following in Alabama, which Trump won handily in 2016 and consistently gives him some of his highest approval ratings in the nation.”

“While polls show Sessions, a household name in Alabama, is leading over other top candidates, such as former Auburn University football coach Tommy Tuberville and Rep. Bradley Byrne, he doesn’t appear to hold a large enough lead to win the race outright on Tuesday,” USA Today reports. “Sessions would need to get more than 50% of the vote to win the nomination to challenge Jones in the November general election. If he doesn’t, there will be a run-off election between Tuesday’s top two candidates on March 31.”

Of concern to Sessions, who holds a narrow lead in the polls, is the threat that the president may once again attack his former AG over his handling of the Russia probe that led to the appointment of special counsel Robert Mueller.

“The president has held on to the grudge against Sessions as the impacts from the Russia investigation continue to linger, most recently with the sentencing of Trump’s longtime confidant Roger Stone,” the report continues. “Stone was one of dozens indicted in Mueller’s investigation. So when Sessions announced on Fox News in November that he would run to retake his old Senate seat, many were waiting on the president to weigh in.”

According to a GOP consultant in Alabama, when Sessions jumped into the race, locals expected the president to lend his name to endorse Sessions in order to reclaim the seat with a sure bet — but that never happened.

“We all thought, ‘this is going to get good,'” Angi Horn Stalnaker said. “But nothing happened.”

According to the report, Trump has continued to knock Sessions in private, with USA Today noting, “Some White House aides have even tried to slip flattering articles about Sessions to the president. The articles, which come along with stories on other crucial congressional races across the nation, show Sessions being complimentary of the president and his agenda.”

However, Sessions also has his detractors in the Republican Party.

“Some House Republicans who are close with the president have privately been bashing Sessions, pointing out his role in the Russia probe and the lasting effects it has had throughout Trump’s presidency,” the report adds. “Privately, several are even considering campaigning for whatever candidate ends up taking on Sessions in the likely run-off election, which recent polls suggest could be against either Tuberville or Byrne.”