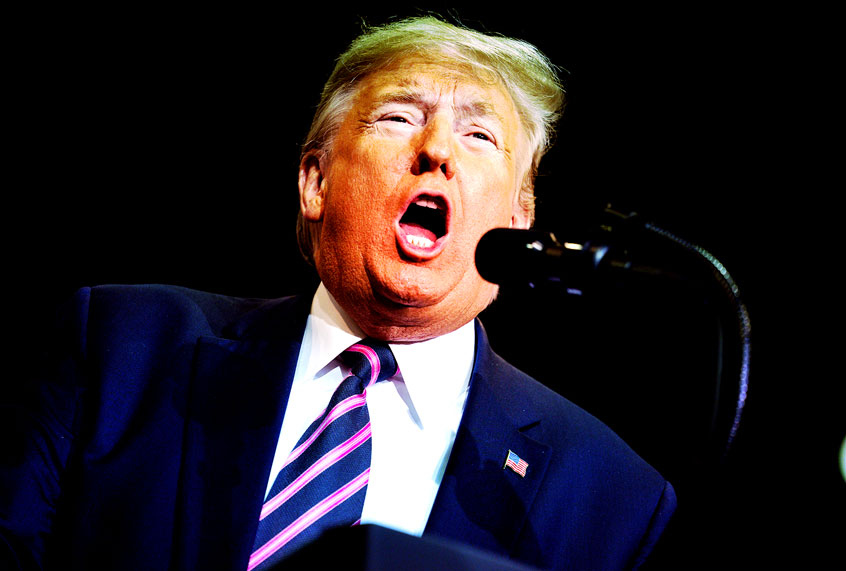 You may be forgiven if you are under the impression that the Trump administration’s response to the coronavirus outbreak is just one more example of his incompetence, aggressive ignorance, contempt for science and outright abuse of government. But it’s worse than that. For the White House, and especially for Donald Trump’s re-election campaign, it’s an opportunity to put into play the massive disinformation apparatus they have built for the 2020 presidential race.

Just look at what they’ve done so far. They unleashed their platoon of poodles in the right- wing media to pound the drum for the proposition that the Democrats have “weaponized” the coronavirus outbreak to “bring down Donald Trump,” a line of outright horseshit pushed aggressively by Trumpazoid spokesbots Rush Limbaugh, Laura Ingraham and Sean Hannity on their shows. Their “evidence”? Well, that terrible, nasty, mean Chuck Schumer has been critical of the Trump administration’s initial request for only $2.5 billion to fight the virus, proposing instead that more than $8 billion will be needed. Trump himself doubled down against Democrats at his press conference on Thursday, unleashing a new attack on Nancy Pelosi. “I think Speaker Pelosi’s incompetent. She’s trying to create a panic. I think she’s not thinking about the country,” he added. “She should be saying we have to work together.” As if that’s not what Pelosi has been saying.

But perhaps the most egregious thing they’ve done was to announce a rule that all statements coming from administration officials must be cleared through the office of Vice President Mike Pence. For the White House and the Trump campaign, saddled with an out-of-control narrative about a disaster they are singularly unequipped to handle, disinformation is no information at all.

The Trump campaign’s disinformation “Death Star,” as one campaign operative described it to McKay Coppins of the Atlantic, https://www.theatlantic.com/magazine/archive/2020/03/the-2020-disinformation-war/605530/ is located in an office building in Roslyn, Virginia, just across the Potomac from Washington. “Heavily funded, technologically sophisticated, and staffed with dozens of experienced operatives,” the Trump campaign plans to spend more than $1 billion on “the most extensive disinformation campaign in U.S. history,” according to Coppins’ article.

The Trump disinformation juggernaut is overseen by campaign manager Brad Parscale, who was digital director of the Trump 2016 campaign. The Trump campaign ran 5.9 million ads on Facebook in that campaign, according to Bloomberg News, while the Democrats ran only 66,000 Facebook ads. This year’s campaign will make even more sophisticated use of the kind of micro-targeting they used in 2016. A political analyst on MSNBC recently pointed out that micro-targeting has become so effective that as few as 800 women in a mid-size city in Wisconsin could be sent a single anti-abortion ad on Facebook, thus eliminating the cost of broadcasting political content more widely.

Former New York Mayor Mike Bloomberg has already spent hundreds of millions on conventional TV advertising in his campaign for the Democratic nomination, and has promised to keep spending to defeat Trump even if he doesn’t win. But Democrats who still think that politics is a game that can be won by pouring vast sums of money into  15- and 30-second ads on television should recall that the Trump campaign spent very little on conventional TV advertising in 2016, and doesn’t show signs of changing that strategy this year.

Perhaps the biggest target of the Trump disinformation effort will be the media itself — cable news, newspapers and local TV news operations especially. Trump’s disinformation effort used the impeachment battle as a practice round to test out tactics for the election. Using Republicans on the House impeachment committee followed by defense lawyers during the Senate trial, they put forth a blizzard of conspiracy theories, rumors and outright fabrications to distract everyone’s attention from Trump’s crimes in the Ukraine scandal. By the end of that Senate trial, it seemed that the truth about what Trump did or didn’t do had ceased to matter.

“The issue for many people isn’t exactly a denial of truth as such,” explained a recent story by Sean Illing of Vox (a former Salon reporter). “It’s more a growing weariness over the process of finding the truth at all. And that weariness leads more and more people to abandon the idea that the truth is knowable.” Illing quoted Trump’s 2016 campaign manager Steve Bannon on the campaign’s strategy for 2020. “The Democrats don’t matter,” Bannon explained in an interview in 2018. “The real opposition is the media. And the way to deal with them is to flood the zone with shit.”

We’re getting a taste of the “shit” they plan to shovel during the presidential campaign in the way the Trump administration is handling the coronavirus story. Trump’s blame-the-media strategy was perfectly illustrated in a Wednesday tweet: “Low Ratings Fake News MSDNC (Comcast) & @CNN are doing everything possible to make the Caronavirus [sic] look as bad as possible, including panicking markets, if possible. Likewise their incompetent Do Nothing Democrat comrades are all talk, no action. USA in great shape!”

If you’re like me, you’ve given up on keeping track of the Washington Post’s running count of Trump’s lies. The last time I looked, the number was somewhere north of 15,000. That the total has ceased to matter is an illustration of the effectiveness of the campaign’s disinformation strategy.

Trump’s disinformation strategy depends on a central paradox. Even as Trump tells so many lies we can’t keep up with him —about everything from the weather to the size of the crowds at his rallies —- his campaign counts on the media to keep emphasizing the lies he tells about his opponents. You want an example? Look how successful he was in tarring Joe Biden with the brush of “corruption” in Ukraine. There wasn’t a scintilla of truth in anything Trump or any of his minions said about the Bidens and Ukraine, yet that’s all we heard about for six fucking months.

The man who held a Miss Universe pageant in Moscow and lied through his teeth about his attempts to build a Moscow Trump Tower is running a campaign that’s been all over Bernie Sanders for “honeymooning in Moscow.” The man with the most garbled syntax in American political history is campaigning against Joe Biden for his occasional verbal miscues, unfinished sentences and “gaffes.” And the man who has been accused of sexual assault and harassment by more than 20 women, and sued by several of them, is never going to let you forget that Bloomberg has had several non-disclosure agreements with women he employed. And all this has been regularly reported by mainstream media, and will continue to be.

Trump had Hillary Clinton’s emails to bellow about in 2016, and this year he’s already leading chants of “lock her up” at his rallies. I’m not a betting man, but if I was, I’d lay money on Trump ordering his attack dog William Barr to find someone, preferably a female someone, and perp-walk her into jail by the fall.

On Friday night at a rally in South Carolina, Trump called the coronavirus “the Democrats’ latest hoax,” proving that every day, in every way, you just can’t make this shit up.

Why Jane Goodall is hopeful for the future

Hey, Democrats: Want four more years of this criminal lunatic? Keep it up

African Women Have COVID-19 Stories To Tell: Let’s Watch Them