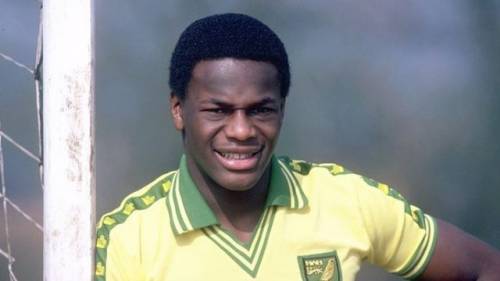 As a lifelong football fan, I am fascinated by superb goals. Goals are the life blood of the round leather game as is what drives most fans hysterical.

One of the best goals ever that the game has recorded was one of the ones scored by Justin Fashanu in 1980 while plying his trade with Norwich. The goal was against Liverpool and it shot him up to prominence as a star to watch out for. February 19, this year makes it his 59th posthumous birthday and it is necessary to dig into what made him tick.

He made history in 1981 as the first black man to command a one million British pounds fee when he moved over to Nottingham Forest and pundits marked him as a potential great. He played for the English under 20 team between 1980 and 1982 with many analysts opining that he would end up playing for the Three Lions.

Tragically, he had little success after his record signing as he had a stormy relationship with the Nottingham Forest coach, Brian Clough and was only allowed to play for one season scoring a miserly three goals. He was later offloaded to Southampton on loan with his troubles never ending as a result of a nagging knee injury.

Another reason why he swiftly deteriorated as a star striker was as a result of his then rumoured gay sexual orientation. Clough made a huge jest of him as a result of it and he was the butt of cruel jokes by the fans and many of his team mates alike. A deep homophobia was in the air at the time in the United Kingdom and being black which was also another target for the racists didn’t help matters swing in his favour. Things were so bad for him that he was forced to take a break from the English league and seek solace playing in some clubs in the United States and later Canada.

While he was in Nottingham Forest, he made a famous visit to his Barrister Father who abandoned him and his equally popular younger brother, John Fashanu in England where he came to study law in the 1950’s. Sports journalists in Nigeria covered the visit and he was in the news and was given a hero’s welcome. The late Presumed winner of the June 12, 1993 presidential elections and the then Pillar of sports in Nigeria, Chief M.K.O Abiola tried to convince him to play for the Super Eagles but he had other plans and was secretly nursing the ambition to play for the Three Lions.

In October 1990 while still playing in the English league a year after he returned back there, he granted an interview with the press where he came out as gay.

The backlash from the public was extremely harsh and even his family members didn’t find it funny. His younger brother, John publicly disowned him and it is on record that he tried to prevent him from coming out by paying a huge sum of money to him.

The image of footballers is one of macho and being gay at the time which was seen as feminine didn’t fit into the mores of the game. The British weren’t ready for him at the time and once more he hopped into exile by relocating to the United States where he got a job as a player coach.

In 1998, trouble loomed large for him as a he was accused of raping a minor lad who passed the night in his house after a party. A bench warrant for his arrest was issued. He fled back to England and left a suicide note that he wouldn’t get a fair trial in the US because of his skin colour as well as his homosexuality and that the sex was consensual. He then sadly proceeded to hang himself.

His death jolted the entire sports community and the regrets began to pour out. Like medicine after death, he was posthumously honoured by being inducted into the National Football League of fame as well as a Netflix movie being made about him in 2017. His niece, Amal Fashanu, spearheaded the efforts to get him recognized irrespective of his minority sexual orientation. A song was composed in his honour by the London band – Elephants and Castles, as well as the creation of the Fashanu All Stars which was created to tackle homophobia in British football.

It is sad that the circumstances of the times pushed him to taking his own life. The story may have been different if he had been shown some more love and support. It is on record that no footballer in the UK has come out as openly gay perhaps for fear of the backlash that Justin suffered in a hypocritical and uncaring world. If only there was more understanding by the brutal society, he may have still being alive today.

May his soul rest in peace!