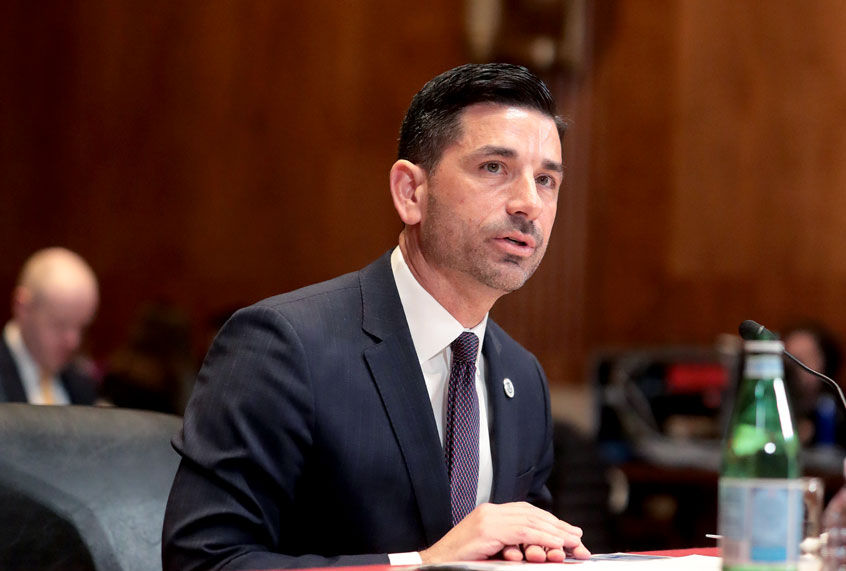 Senators from both parties slammed the Trump administration’s response to the coronavirus amid dire warnings from health officials.

The Senate was briefed by Trump administration officials after Democratic leader Chuck Schumer, D-N.Y., said the administration was “asleep at the wheel” as the country faces a “pandemic.”

Senators apparently did not get the answers they were looking for.

“This morning’s classified coronavirus briefing should have been made fully open to the American people,” tweeted Sen. Richard Blumenthal, D-Conn. “They would be as appalled & astonished as I am by the inadequacy of preparedness & prevention.”

Sen. John Kennedy, R-La., grew frustrated when Wolf was unable to provide an estimate of how many people in the U.S. may become infected with the virus, its mortality rate, and what supplies the country needed to deal with a larger outbreak.

“You’re the secretary, I think you ought to know that answer,” Kennedy exclaimed.

Sen. Mitt Romney, R-Utah, also said he was “very disappointed” at the lack of preparation.

“At this stage, I think we are substantially underinvesting in what would be appropriate for a setting which could be serious,” said Romney, who confronted administration officials during Tuesday’s briefing. “I think we should be pulling out all the stops.”

The virus has spread to more than two dozen countries since it originated in China, despite the government’s crackdown in an attempt to stop the contagion. There are 53 confirmed cases in the United States out of more than 80,000 around the globe, according to the World Health Organization, but Harvard epidemiology professor Marc Lipsitch told The Atlantic the real number is likely closer to 100 to 200 people. Only about a dozen states have the tests necessary to check patients for the virus because the Centers for Disease Control sent out faulty testing equipment and many people who are infected may show no symptoms even as they spread the virus.

Lipsitch estimates that 40% to 70% of the world population will become infected with the virus, though he stressed that many of those will not become seriously ill. The virus appears to have a fatality rate of around 2%, according to the report, which is much higher than the flu but considerably lower than past outbreaks, like the avian flu, SARS (severe acute respiratory syndrome) and MERS (Middle East respiratory syndrome). Some people may be completely asymptomatic, though people with weakened immune systems and the elderly are particularly at risk of death. More than 2,600 people have died from the virus.

Fears over the virus intensified on Monday as the stock market plunged more than 1,000 points thanks to investor concerns over the economic impact of the virus. Trump claimed on Twitter that “Stock Market starting to look very good to me” as he insisted that the “Coronavirus is very much under control in the USA.” The Dow Jones average fell another 880 points by closing time on Tuesday afternoon, and has lost about 7% of its value in two days.

Trump has repeatedly tried to downplay the virus. Supporters such as Rush Limbaugh have claimed that the alarm over the virus is a plot to “bring down” Trump, and Fox Business host Charles Payne blamed the stock market slide on Bernie Sanders’ victory in the Nevada caucuses. The president has pushed a widely disputed claim that the virus would “go away” once the weather gets warmer. “We’re probably down to about 10” cases, Trump falsely claimed during a press conference in India on Tuesday.

CDC Director Nancy Messonnier deflated any sense of optimism during a news conference on Tuesday, saying that “community spread” in the U.S. was inevitable and that two of the three conditions defining a pandemic have already been met. “It’s not so much a question of if this will happen anymore,” she said, “but rather more a question of exactly when this will happen and how many people in this country will have severe illness.”

Messonnier urged parents to prepare for a potential nationwide spread: “You should ask your children’s schools about their plans for school dismissals or school closures. Ask about plans for teleschool.”

The Trump administration has asked Congress for $2.5 billion to fight the virus, which the president attempted to politicize on Tuesday.

“I see that Chuck Schumer criticized it; he thought it should be more. And if I gave more, he’d say it should be less. It’s automatic, you know, with these characters — they’re just not good for our country,” Trump claimed.

But it wasn’t just Democrats who said the administration wasn’t being aggressive enough in tackling the issue.

“This is not the time to try to shortchange the American people. This is the time to step up,” said Sen. Richard Shelby, R-Ala., according to Politico.

Schumer slammed the administration for not being aggressive enough and for planning to take money from a fund intended to fight the Ebola virus.

“That President Trump is trying to steal funds dedicated to fight Ebola is indicative of his towering incompetence and further proof that he and his administration aren’t taking the Coronavirus crisis as seriously as they need to be,” Schumer said. “We’ve seen no sign that President Trump has any plan or urgency to deal with the spread of the Coronavirus. We need real leadership, and we need it fast.”

House Speaker Nancy Pelosi said the administration’s funding request was “long overdue and completely inadequate to the scale of this emergency.”

Pelosi added that Trump has left key positions that would be tasked with managing the response to the virus vacant for years.

“For almost two years, the Trump Administration has left critical positions in charge of managing pandemics at the National Security Council and the Department of Homeland Security vacant,” she said. “The President’s most recent budget called for slashing funding for the Centers for Disease Control, which is on the frontlines of this emergency. And now, he is compounding our vulnerabilities by seeking to ransack funds still needed to keep Ebola in check.”

Sen. Chris Murphy, D-Conn., added that not only did Trump “put no one in charge” of efforts to fight the virus and pushed for cuts, he also “shut down 37 of 47 global anti-pandemic programs.”

He tried, God will bless him

I woke up this morning with this prayer for you and your family members, God will preserve you and your lovely family from this COVID 19 in Jesus mighty name Amen, have a great day /stay safe!! ... See MoreSee Less

The Onogie of Ekpoma HRH Anthony Abumere II has given his backing to the Chairman of Esan West Local Government Council, Mrs. Ruth Osahon Okunwe to shut down Ekpoma Main Market as a measure geared towards curtailing the spread of the dreaded Coronavirus Pandemic.

Besides giving his backing, the Ekpoma monarch promised to join in the awareness campaign against Coronavirus Pandemic by sending messages to the various heads of communities and villages (Edionwele) within the kingdom, to announce to their inhabitants, that Ekpoma Main Market has been closed down for the time being.

I think the chairman Esan North East Local Government, Hon. Austine Okoibhole equally deserves this kind of support from traditional rulers in the local government to fight against the dreaded Coronavirus Pandemic.

Markets are major source of revenue for the councils. So for the Esan North Council chairman to forego the money accruing from revenue generated from the market to protect the health of the the people, shows that he has great love and care for his people. ... See MoreSee Less