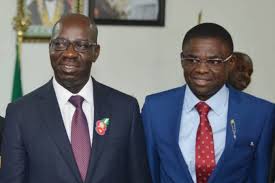 Briefing Edo State Deputy Governor, Rt. Hon. Comrade Philip Shaibu on the reason for identifying with the state government, the traditional ruler said his community was known for keeping its word at supporting, voting for and electing leaders intoduced by the APC as shown by the consistency of documented records of the party which clearly showed that the ward has never lost any of the seven voting units in Ward 5 to any opposition party.

He stated that in the same spirit of oneness of heart, the entourage was meeting with the Deputy Governor, “Primarily to identify with the government of Edo state as well as to appreciate our son, Philip Shaibu, for your simplicity and humility which has put you on an ascending political ladder over the years”

While extolling the Deputy Governor for his political prowess, the traditional ruler pleaded for visible touch of government in his community when he requested for the provision of basic amenities such as potable water and tarred roads, adding that the two boreholes in the community have since parcked up.

Stating that roads in the community were bad, he asked for the renovation or resurfacing of the 3 kilometre Iraokhor Roads and the comletion of the long abandoned Apana- Iraokhor road.

He also advocated for more political appointments of his subjects into government so that the community could easily interface with government.

Responding, the Deputy Governor thanked the entourage for its support over the years, adding that Iraokhor was home to him.

He appreciated the traditional ruler for belonging to the group of people who could boldly speak to power. He observed that issues raised were all germane, hence, deserved to be looked into. According to him, the issues of portable water and good access roads were the right of the community having voted a purposeful and people- oriented government into office.

He said he would get the Ministry of Water Resources to look into the bore hole issue towards having a reticulated water facilities instead of boreholes which are being phased out to ease off possible source of spread of epidemics in rural and semi urban communities.

He noted, “People bury their loved ones in compounds. After a while these bodies decompose and sink into the ground in liquid form to mingle with underground water. Same process happens with our use of Soak- away systems in our homes. Sometimes the boreholes are close to the graves or soak- away. This could be responsible for some of the ailments people suffer.”

He noted that the state government as a matter of policy, was already looking at using the Uromi reticulated water project to come up with a possible good water sanitation process. He also said he would get across to the State Employment and Expenditure for Results (SEEFOR) Project, a World Bank Assisted Project, to include Iraokhor in it’s road projects.