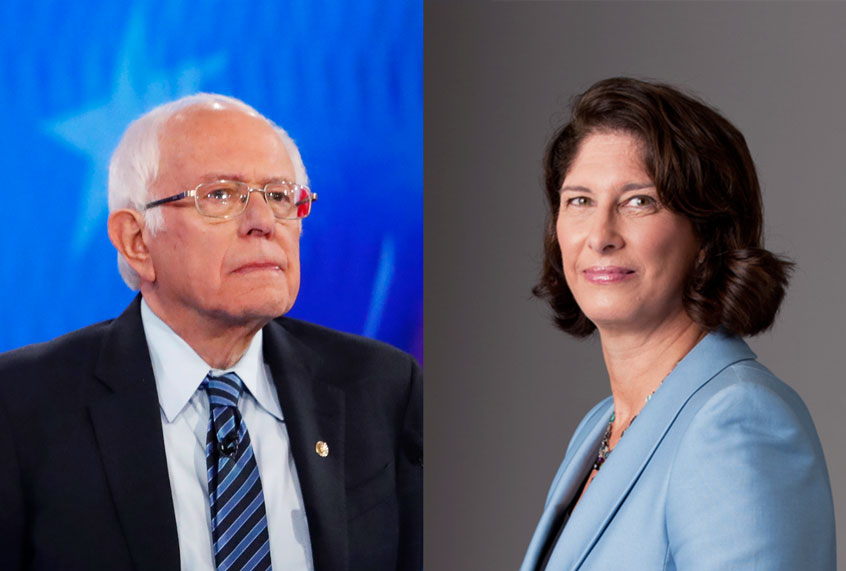 The Iowa caucuses officially began the Democratic primary, and even in this ongoing, extended battle for the White House, Iowa remains an important marker for candidates and the media. A close look at a piece by two of NPR’s leading political reporters, which aired just before the caucuses, provides a view of how journalists speak with authority on issues they seem to know very little about. The conversation between Mary Louise Kelly and her partner Mara Liasson, headlined “Where Iowa Falls in the Big Picture of the 2020 Election” (“All Things Considered,” 2/3/20), began with Kelly introducing the importance of Iowa for Democrats, but, she observed, it’s been on the “back burner” after days of constant impeachment coverage.

Liasson agreed, then spent most of her introductory remarks on Trump, presenting him as legitimate as any past president:

Tomorrow night President Trump appears in the well of the House before he speaks to both houses of Congress for the big curtain-raiser for him, the State of the Union address. It’s the biggest audience he’ll have all year. It’s — every president gets to kind of kick off his re-election campaign with the State of the Union address, and we can expect to hear a campaign message from him tomorrow.

No mention was made that Trump had flouted the Constitution by refusing to cooperate with an impeachment hearing, or that Republican senators would fail to uphold the Constitution by voting to dismiss impeachment charges after a sham trial with no witnesses. Liasson’s critical remarks were reserved for the Democratic Party, both voters and candidates. 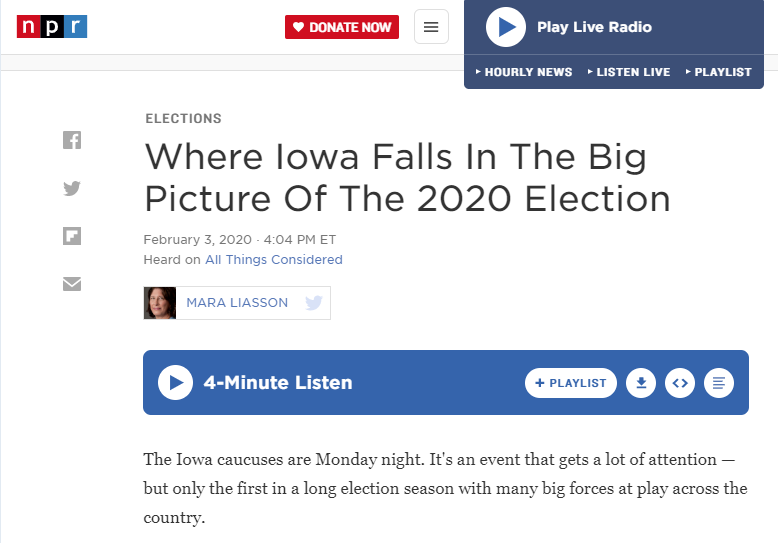 Mary Louise Kelly brought on Mara Liasson (NPR, 2/3/20) to talk about what to expect on the “long road ahead between now and November.”

“I see a very unsettled race,” Liasson told Kelly, and continued, “Democrats are paralyzed by indecision.” One wonders which race she is looking at, as both state and national polls show that Democratic voters are anything but “paralyzed,” and for months have been anticipating the primary with “an incredible degree of excitement” (Vox, 2/3/20). One national Quinnipiac University poll (1/28/20) found a whopping 85% of Democratic voters were either “extremely” or “very” motivated to vote in the primary contests, characterizing their enthusiasm as “sky high.”

Liasson claimed that the main issue for the Democratic Party is “electability” — a fraught term often used to signal ideological orthodoxy rather than empirical chances of winning elections (FAIR.org, 10/25/19). She asserted that Democrats are “confused,” and “for good reason,” because Trump remains an “existential threat,” and not only are none of the candidates “a sure thing,” none even “seem likely to defeat” Trump.

Such handwringing is, again, not founded in facts or data. An NBC News/Wall Street Journal poll published the day before this broadcast — one day ahead of the Iowa caucuses — found that Trump was trailing all the leading 2020 Democratic candidates, with the top four candidates ahead of Trump in theoretical head-to-head matchups. Looking more broadly at polling, the two candidates then leading the Democratic field, former Vice President Joe Biden and Sen. Bernie Sanders, had beaten Trump in 69 of 73 and 63 of 68 matchups, respectively.

The supposed lack of “electability” was solidified as a media obsession in mid-April of last year, when Obama’s former campaign manager, Jim Messina, now a political strategist for corporate Democrats (Common Dreams, 2/13/20), announced on the Powerhouse Politics podcast (ABC, 4/17/19) that “Sanders couldn’t beat Trump.” Messina went on to predict that the Democratic field would be honed down to Sen. Kamala Harris and former Rep. Beto O’Rourke, along with Joe Biden, who had not yet entered the race.

Both Harris and O’Rourke, of course, dropped out of the race before the first vote was cast, while Biden’s polling numbers were in free fall after poor showings in both Iowa and New Hampshire. (More recently, he appears to have finished a distant second in the Nevada caucuses.) But despite Messina’s foggy crystal ball, his unelectability trope was adopted by pundits as a platitude. Vox (4/24/19) was one of the few to point out a few days later that Sanders actually had a strong electability record, having “consistently run ahead of Democratic Party presidential campaigns in Vermont” when he ran for re-election as a U.S. representative. But “unelectable” is now an overworked spin pushed by centrist Democrats and their corporate media allies.

Liasson went on to worry about the “huge vulnerabilities” all the Democratic candidates have “for the president to exploit.” No mention is made of Trump’s mammoth negatives that present Democrats with enough ammunition to send him running, if they were so inclined. Indeed, corporate media have been incapable of imagining powerfully pointed, rhetorically effective, authentically truthful critical campaigns against Trump. 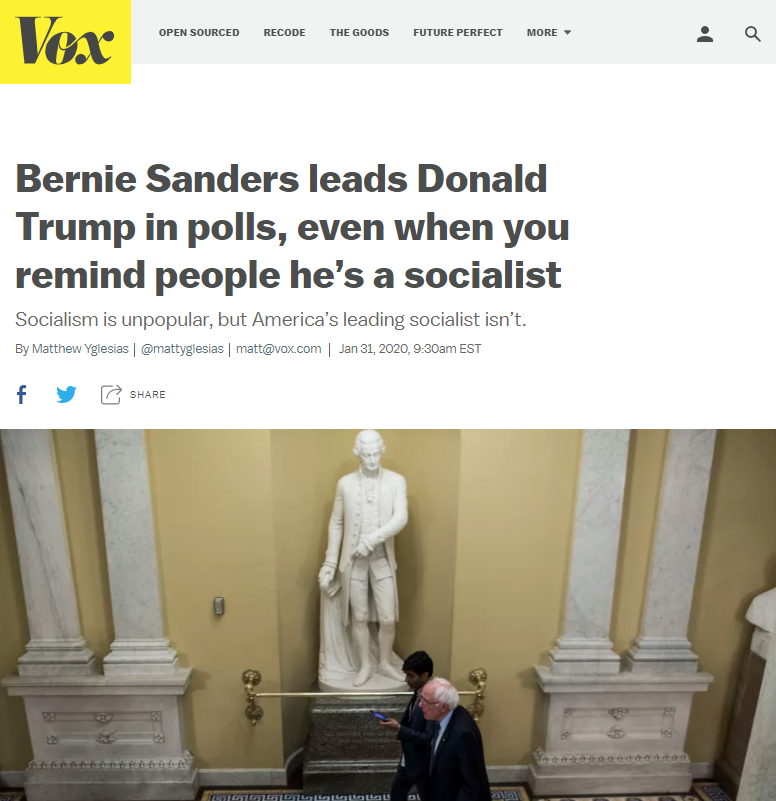 Bernie Sanders continues to beat Donald Trump in polls even when you remind people that he’s “a socialist who supports a government takeover of healthcare and open borders” (Vox, 1/31/20).

Instead, one of the most feared “vulnerabilities” frequently associated with Sanders, now the clear Democratic frontrunner, is that he is a socialist. So common is this assertion that Data for Progress decided to explore it, using the Lucid survey sampling platform to test three different versions of a Sanders vs Trump polling question (Vox, 1/31/20).  The first version mentioned no affiliation, the second identified the candidate by party, and the third had Trump labeling Sanders a socialist, in this survey question:

If the 2020 U.S. presidential election was held today, who would you vote for if the candidates were Democrat Bernie Sanders, who wants to tax the billionaire class to help the working class and Republican Donald Trump, who says Sanders is a socialist who supports a government takeover of health care and open borders?

In all three scenarios, Sanders won. He actually did slightly better when identified as a socialist as opposed to just a Democrat.

This third question also dispatched another of Liasson’s exaggerated negatives, the issue of “open borders.” But the wording she chose to represent the issue revealed her slant. Liasson asserted, “Majorities of voters don’t want to get rid of ICE or decriminalize border crossings.” What the National Immigration Forum found in November of last year was:

A majority of Americans told pollsters that they thought immigrants strengthened America, said immigrants have positive attributes such as “hard-working” and having strong family values, and that immigrants were good for America. The percentage of Americans who said they want immigration levels to be reduced is at the lowest level, in two different polls, since that question was first asked going back to 1965 (in Gallup’s poll).

These open-minded American attitudes toward immigration hold tight even in the face of the overt anti-immigrant racism, widely articulated at the highest levels of government, in an ongoing campaign the likes of which the U.S. public has not been subjected to in nearly a century. The result is Trump’s premier accomplishment, a border wall, justified by anti-immigrant rhetoric. Americans may not be willing to say they favor decriminalizing the border, but they most certainly recoiled from the brutality of criminalization so evident on the weaponized borderlands of the American Southwest.

The New Republic (2/5/19) discussed the post-caravan opinion data, citing a Washington Post/ABC poll (4/30/19) that  suggested that voters opposed Trump’s draconian approach: The wall “remains extremely unpopular, with two voters opposing it for every one who supports it.” Most importantly, the survey demonstrated a desire to move beyond “securing” and further militarizing the border. We can only imagine what a powerful, careful, progressive Democratic campaign debate on open borders might actually accomplish.

As the two journalists continued to chat, Liasson took closer aim at Sanders, stating with bold authority that “you don’t even need to do the research part of ‘oppo’ research because his policy positions are opposed by big majorities of Americans.” Clearly, these journalists did little to no research preparing for this important broadcast. So many polls have documented what the public thinks about Sanders’ policy positions, and the evidence is overwhelming: From a wealth tax to minimum wage, they are extremely popular.

Last March, a CNBC/All-American poll illustrates this: Support for paid maternity leave was 85%; government funding for childcare, 75%; boosting the minimum wage, 60%; free college tuition, 57%. Medicare for all came in at 54%. In October 2019, The Hill reported on an American Barometer survey that found “70% of the public supported providing ‘Medicare for All,’ also known as single-payer healthcare.”

Notably, the only issue included in that poll that garnered only a 28% approval rating was Andrew Yang’s idea of a universal basic income, even with the slogan “freedom dividend,” something Sanders has not focused on.

Another key policy proposal with broad public support is a wealth tax that both Sanders and Elizabeth Warren support. According to a Reuters/Ipsos poll (1/10/20), nearly two-thirds of respondents agree that the very rich should pay more. Among 4,441 respondents, 64% strongly or somewhat agreed that “the very rich should contribute an extra share of their total wealth each year to support public programs.” Support among Democrats was even stronger, at 77%, but a majority of Republicans, 53%, also agree with the idea.

Liasson continued with a carefully selected list of “unpopular” positions that Sanders has taken: “He wants to ban fracking and somehow win Pennsylvania.” But a poll released days earlier (Pittsburgh City Paper, 1/30/20) found that 48% of Pennsylvania voters support a ban on fracking, and just 39% opposed a ban; 49% felt the environmental risks outweighed the economic benefits, with 38% taking the reverse position.

“Even a majority of Democrats don’t want to end private health insurance,” she exclaimed. Actually, 77% of Democrats support “a national health plan, sometimes called Medicare for All, in which all Americans would get their insurance from a single government plan,” as do 61% of independents (KFF, 1/30/20).

What can we take away from this sad story brought to listeners by two formidable journalists, one who recently received high praise for her hardball questioning (NPR, 1/24/20) of Trump’s Secretary of State Mike Pompeo? Their ignorance is willful, and finds its roots in a profoundly ideological position, an ideology adopted by journalists who favor and are rewarded by corporate arguments promoted by corporate Democrats.

Kendall Jenner Jokes About Being the Only Kardashian-Jenner Without Kids