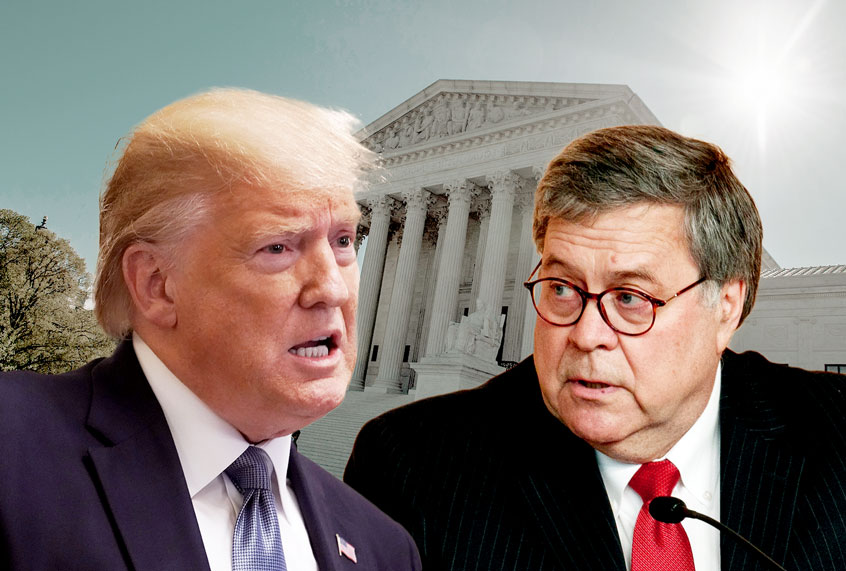 Donald Trump is a simple man but he does have one philosophy, and it’s very primitive: Get even. He has not kept it a secret. Most recently, he had his ghostwriter put it in “Think Big,” his 2009 self-help tome:

I love getting even when I get screwed by someone. … Always get even. When you are in business you need to get even with people who screw you. You need to screw them back 15 times harder. You do it not only to get the person who messed with you but also to show the others who are watching what will happen to them if they mess with you. If someone attacks you, do not hesitate. Go for the jugular.

And he brought that philosophy to the White House. After Bill Barr erroneously pronounced him innocent of all charges in the Mueller report, Trump said:

There are a lot of people out there who have done very, very evil things, very bad things, I would say treasonous things against our country. And hopefully people that have done such harm to our country — we’ve gone through a period of really bad things happening — those people will certainly be looked at. I have been looking at them for a long time, and I’m saying, why haven’t they been looked at?

By now, Senate Republicans are aware of how he thinks, which is why their hissy fit over House Manager Adam Schiff referring to a news report that Trump had said he’d have their “heads on pikes” if they betrayed him was so obviously disingenuous.

I’ve noted this characteristic of Trump’s for quite a while, and it’s always seemed to me only a matter of time before he decided it was time to take off the gloves for real. We may be at that point right now.

Trump has had three public events this week in the wake of the impeachment trial. They have gotten progressively more unhinged. At the State of the Union address on Tuesday night, it was clear he was barely keeping himself under control. His speech was a toned-down version of his rallies, signaling that his campaign was primed to be a scorched-earth base strategy. But you could tell that he was very, very angry.

On Wednesday he let himself go. Appearing at the National Prayer Breakfast in the morning, he was beyond unrepentant. Trump arrived at the event showing everyone a newspaper with the headline “ACQUITTED” and made it clear he was not looking for any kind of reconciliation. He told Washington Post columnist Arthur Brooks, who had espoused the Christian ethic of “love your enemies” in his speech, “Arthur, I don’t know if I agree with you.”

He clearly does not. He went on to attack both Mitt Romney and Nancy Pelosi on their professions of faith, and issued veiled threats to people he says are enemies but are pretending to be allies.

A couple of hours later he held a formal speech before invited Republican officials and staff in the White House. Without notes or a Teleprompter, he spent a solid hour angrily venting his spleen about the last three years:

We had the witch hunt that started from the day we came down the elevator — myself and our future first lady. And it never really stopped. We’ve been going through this now for over three years. It was evil. It was corrupt. It was dirty cops. It was leakers and liars.

In other words, this was a full-blown MAGA rally held inside the White House. Trump bragged and complained and cursed his enemies and the media. But instead of his star-struck, red-hatted followers clapping and chanting, his Washington henchmen were the audience — senators, Cabinet members, lawyers and staff — all of whom laughed and cheered and applauded with the same fervor as his ecstatic rally-goers. He called out many of their names to thank them for their fealty and they all basked in the glow of his acknowledgment.

That may be the most disturbing aspect of that extremely disturbing performance. The transfusion of Trumpism into the highest levels of the Republican Party is complete. That includes Trump’s philosophy of vengeance. The executive branch has been corrupted for quite some time, but now that Republican senators have disgraced themselves with their votes to acquit the president they have become active collaborators in his ongoing defilement of the office.

Sen. Mitt Romney, R-Utah, said in his floor speech that he expected to be vilified for his vote to convict the president. The White House itself is taking the lead:

There was a time when senators would have circled the wagons around one of their own, but there was no sign of that. Even Romney’s fellow Utah senator, Mike Lee, who just weeks ago was aghast at the Trump administration’s lies to the Congress about the assassination of Iranian Gen. Qassem Soleimani, nearly fainted with delight when Trump noticed him at the White House event.

Attorney General Bill Barr was sitting next to Melania Trump, clapping and smiling, obviously undisturbed by Trump’s crude insults toward former FBI employees. Indeed, Barr delivered another gift to his patron this week by issuing an order that he must personally approve any investigation into campaign finance crime, which was obviously meant as a green light both for Trump and for any ambitious federal officer who has dirt on Trump’s rivals.

Trump got away with the Ukraine plot. Why not take it domestic, and go after Trump’s enemies list?

There are already new investigations of former FBI Director James Comey and former acting director Andrew McCabe. Special counsel John Durham is reportedly conducting “the investigation of the investigation” as a criminal case that may include former CIA Director John Brennan.

Now the Senate is lurching into high gear to persecute Hunter Biden with a fishing expedition into his finances. Oddly, the administration has fully cooperated without any subpoenas, instantly providing the Republican committees some of the most highly guarded materials in the Treasury Department. Sen. Rand Paul, R-Ky., has outed the purported Ukraine whistleblower on the Senate floor.

CIA Director Gina Haspel was noticed standing and applauding the president at the State of the Union address, a break in the normal protocol that calls for anyone in her position to be strictly nonpartisan. This would suggest that she too may be on the president’s re-election team.

They are all MAGA now.

House Intelligence report on Trump is scathing — but who cares? The election is what matters