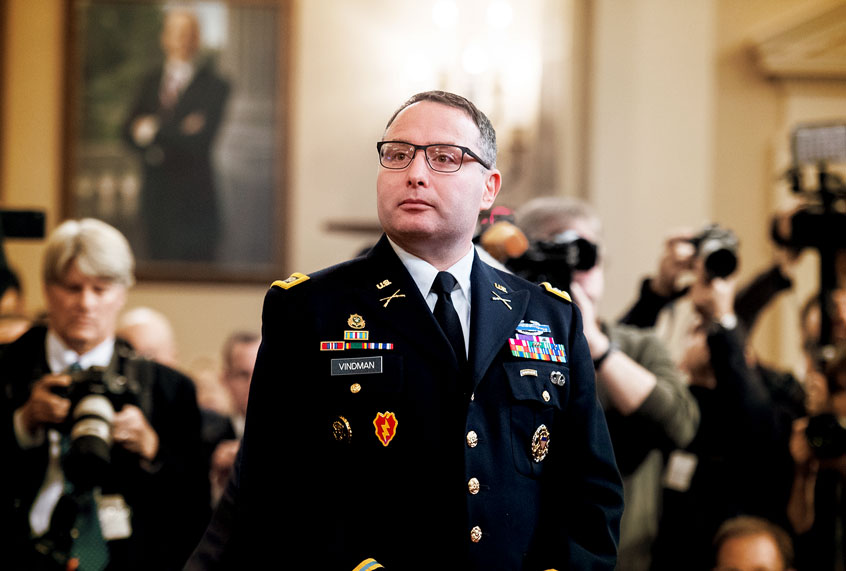 Lt. Col. Alexander Vindman, one of the central witnesses in the House impeachment inquiry of President Donald Trump’s Ukraine scandal, has been escorted out of the White House by security, according to a statement from his lawyer.

He had been detailed to the White House to serve on the National Security Council.

“Today, Lieutenant Colonel Alexander Vindman was escorted out of the White House where he has dutifully served his country and his President. He does so having spoken publicly once, and only pursuant to a subpoena from the United States Congress,” the statement said.

It continued: “There is no question in the mind of any American why this man’s job is over, why this country now has one less soldier serving it at the White House.”

Vindman was a firsthand witness to Trump’s July 25 call with Ukrainian President Volodymyr Zelensky in which he asked for the country to investigate his political opponents, including former Vice Presiden Joe Biden. That effort led to Trump’s impeachment in the House of Representatives and recent acquittal in the Senate.

Late on Thursday, reports had broken that Vindman was likely to be forced out of the White House. And when Trump was asked about those reports on Friday, he essentially confirmed them, saying: “I’m not happy with him. You think I’m supposed to be happy with him? I’m not.”

During his testimony to Congress, Vindman memorably tried to assure his family that he would not face backlash for speaking out.

“Do not worry, I will be fine for telling the truth,” he said.

In a recent statement from the White House, Press Secretary Stephanie Grisham indicated that the president would be looking for vengeance of impeachment. Regarding the conduct of lead impeachment manager Rep. Adam Schiff (D-CA), she said: “Will there be no retribution?”

Political Parties Have No Structure For Monitoring Public Office Holders

Gov. Masari calls for total wipe-out of Bandits in Northwest

The City of Lagos came alive this past weekend as Wande Coal, Niniola and Skiibi performed at national premium lager,