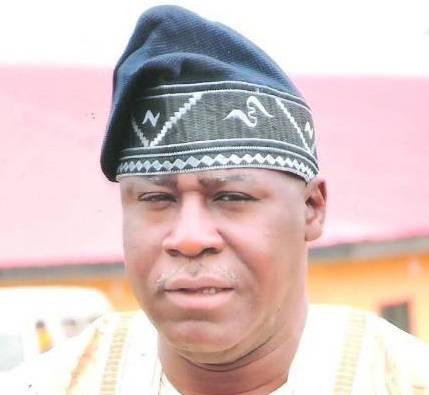 Well before the Yorùbá people and their leaders sprang the surprise of their Western Nigeria Security Network codenamed Àmòtékùn, one has been living with it in several facets of the bedroom.

There are two windows in the bedroom draped in Àmòtékùn apparels. The closet, which had mirror doors, has scalloping on top of it, sewn in a manner to not inhibit the opening and closing. It is about nine inches in width.

Needless to say that the bedsheets and covers are emblazoned in Àmòtékùn insignia. There are seven pillows of various sizes around on the bed. All of them are sewn in Àmòtékùn apparels.

At the foot of the bed, to the left, rests a chair shaped like a woman’s high heeled shoe. It is a favourite because of the comfort it generously avails. It has selfishly taken one away from the yawning bed on several occasions. Its cover is unambiguously Àmòtékùn.

At the top of the bed, are hung two pictures of Àmòtékùn in 18′ x 18′ sized wooden frames. Lining the internal edges of the wooden frames are dried leathers cut off of Àmòtékùn. It is an added beauty.

In one of the pictures, the Àmòtékùn sprawls patiently but obviously, anxiously on the ground like a desperate hunter, hungry for a prey. Its countenance, flat, flush and supine. Deciphering its thoughts could be a yeoman’s task, but its body language is very instructive.

In the other picture, the Àmòtékùn is standing, but not merely. It gives an image akin to that of Usain Bolt about to start a one hundred meter dash. Gangly. Focused. Robust in its gawkiness.

It wears a ravenous look. Its manner of positioning purveys frantic and frenzied predatory instinct with conspicuous fulminating fury in its imminence. Its concentration, laser guided in its deadliness, it seems.

On one side of the wall is a picture of a shoe covered in the paraphernalia of Àmòtékùn. The shoe’s vamp looks like the frontage of one of The Young Shall Grow buses. Square shaped, shining and intimidating like a weapon.

Its welt, formatted like the hind legs of an Àmòtékùn, is as fanciful as it is clinical, but unambiguous in its message. The Architects of the design seemed intent on sending a message, with the inserted eyelet.

The brogue lamina seems deliberate on the shoe to ensure perfect Àmòtékùnisation of the entire concept. It seems a deliberate act meant to align the physiological features of the shoe to a real Àmòtékùn.

There are six candle holders strategically placed all over the room. All of them attired in the tapestry of Àmòtékùn. There were jewellery boxes, lampshades, mugs and calabash draped in the trappings of Àmòtékùn.

Thus, as the appeal of Àmòtékùn spread all over the world as a result of the determination of a people to refuse to be victims in their homesteads, living in this kind of room has to rub on one’s evaluation.

It was an unrestrained expression of inner desires of a people bewildered and befuddled by not just incompetence of unquantified proportions, but a putrid and parlous genre of it. Even, eni kò dùn mó, kò lè so; those who did not like it, had not the temerity to say it.

Thus, inadvertently and unwittingly, Àmòtékùn became the cognomen of the Yorùbá nation.

Sowore’s Mother Stands By Him, Says “My Son Is Not A Criminal, Speaks Against Injustice”

Accept The Will Of God, Traditional Rulers Tells Atiku After Visit To Buhari

This is a good campaign. Pls keep it up.

Who is the person

Did you see the person

This is the reason y the so called leaders take us for granted,because some of us talk out of senses. Now, if you are ask to provide the corpse can you get it?

Who be the person?

@ George it means u don't have television in ur house. U don't listen to news

Father have mercy on us.

God please have mercy on the world

This morning God is saying to you, your trouble is In trouble, for He will trouble all your troubles in Jesus mighty name Amen, have a great day / stay safe!! ... See MoreSee Less