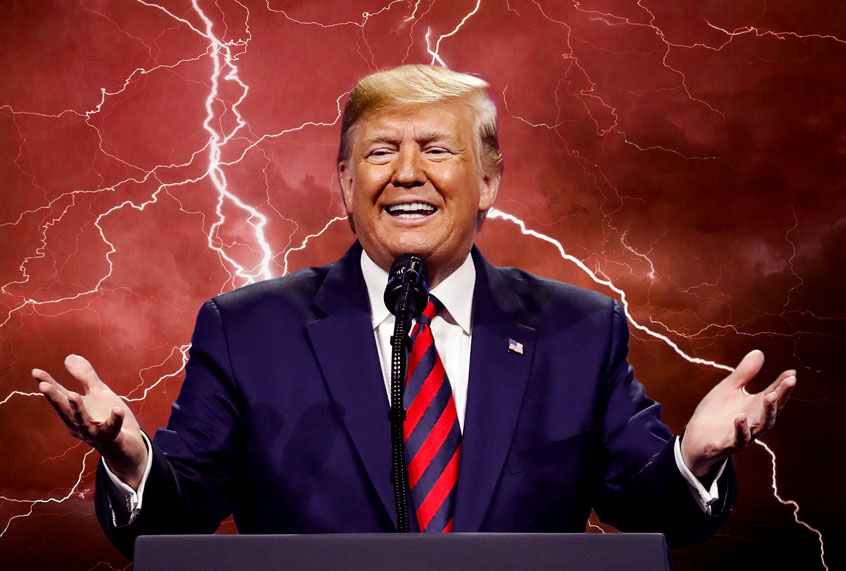 On Wednesday, even before the GOP Senate had acquitted President Trump on his corrupt withholding of U.S. military aid to Ukraine for personal political gain, his White House issued a veto threat for an emergency aid package intended to help Puerto Rico recover from a series of damaging earthquakes, including one that struck the previous day.

Say this for Gerald Ford: He didn’t appear to hold any kind of personal grudge against New York. Trump, however, apparently feels bitterly aggrieved despite escaping unscathed from two major efforts to curb his corruption in the last year. He is capitalizing on his post-acquittal moment by ramping up his politics of revenge — both in terms of rhetoric and policy.

“Neither Puerto Ricans nor the American taxpayers benefit when emergency aid is misallocated, lost, or stolen through waste, fraud, and abuse,” Trump’s veto message said. The distinction between Puerto Ricans and American taxpayers is peculiar — after all, Puerto Ricans are American taxpayers who pay nearly $4 billion a year in federal taxes, including Social Security and Medicare payroll taxes on income. What is even more troubling about Trump’s threat to withhold aid from Puerto Rico is that because of its unique status as a U.S. commonwealth, Puerto Rico cannot accept aid from any other countries. Refusing to help the people of Puerto Rico after a natural disaster is arbitrary, inhumane and cruel — and no other part of the U.S. would be treated this way.

Trump has railed against the island ever since Hurricane Maria, when he tossed paper towels to storm victims and complained loudly and repeatedly about the cost of rebuilding. He held up a previous disaster package for Puerto Rico for nearly two years, and when he finally released nearly $16 billion in funding, he forced Puerto Rico to drop its $15 minimum wage for relief workers.

Such collective punishment was necessary, the president argued, because Puerto Rico is “one of the most corrupt places on Earth.” While Puerto Rico has attracted his particular ire, it’s certainly not the only U.S. jurisdiction whose voters have been punished by this administration, presumably because their political leaders have failed to bend the knee.

To mark his acquittal on an article of abuse of power, Trump celebrated by threatening to abuse his power. White House press secretary Stephanie Grisham previewed Trump’s post-impeachment trial speech on Fox News Thursday, hilariously claiming he would speak with “some humility” and then clarifying: “I think he’s gonna also talk about how just horribly he was treated and that maybe people should pay for that.”

Trump’s first official post-acquittal policy move was the announcement on Fox News that the Department of Homeland Security will suspend all residents of New York from enrolling in the Global Entry program. The excuse? The Empire State has authorized the issuance of driver licenses to undocumented immigrants (as have 12 other states) and also passed a law preventing ICE from accessing the data. Equipped with a sense of double vindication, Trump started a public feud meant to punish a state that doesn’t support him, while maximizing political resonance with his base. Ironically, as the Competitive Enterprise Institute notes, Trump’s move means New Yorkers are barred from a program that expedites entry into the U.S., while Mexican nationals remain free to enroll.

Trump’s politics of the petty “goes well beyond immigration,” as the New York Times editorial board has outlined:

Among other efforts, in September, the Environmental Protection Agency moved to rescind a longstanding federal waiver allowing California to set its own auto emissions standards. That same week, the president ordered the agency to cite San Francisco for environmental violations caused by its homeless crisis. He also discussed with aides the possibility of sending in federal authorities to clear the homeless population from the streets of Los Angeles and herding them into government-backed facilities.

As with the elimination of the state and local tax deduction in the Republicans’ 2017 tax bill — which clearly targeted high-tax blue states that voted for Hillary Clinton — the president’s retaliatory politics turns government into a weapon of revenge.

Trump just canceled his blog because no one is reading it

It’s not just you: The pandemic is making young adults gain weight

Military might, market ideology and moral posturing: A toxic combination that has poisoned America