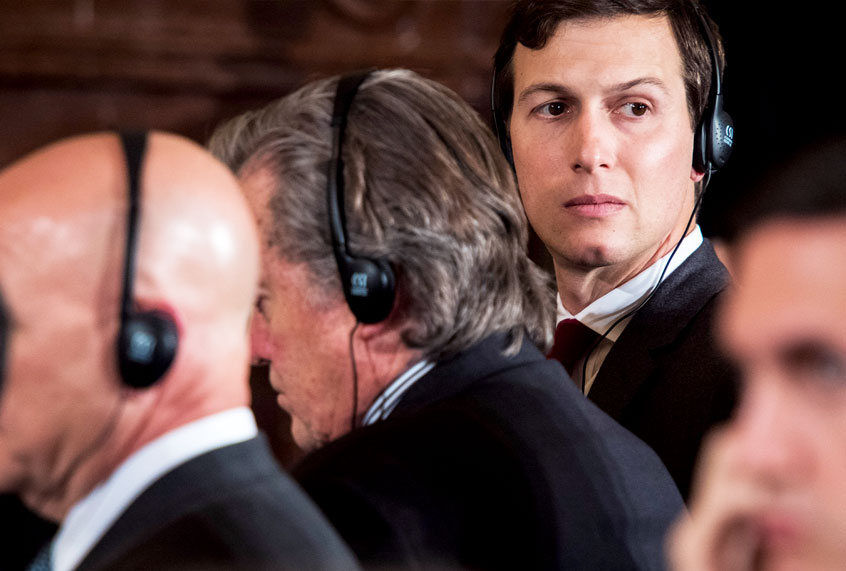 The Department of Justice (DOJ) released a summary of an FBI interview with Trump son-in-law Jared Kushner from November 2017, though it redacted nearly the entire memo.

The significantly redacted release came after the DOJ refused to comply with a court order to release the memo on Kushner’s interview along with dozens of others from the Russia investigation led by former special counsel Robert Mueller. A judge ordered the FBI to turn over the memos to BuzzFeed News and CNN by last month after the outlets filed a Freedom of Information Act request. The DOJ argued that “a member of the intelligence community” must review the memos and add “appropriate reductions.”

The DOJ finally released the Kushner memo on Monday, but BuzzFeed reporter Jason Leopold quickly found that it was “almost entirely redacted.”

In fact, only three lines of the document were left intact:

“A few weeks after the election [REDACTED] Kushner, Flynn, and Kislyak met together at Trump Tower [REDACTED]” the memo said, referring to former Trump adviser Mike Flynn and former Russian Ambassador to the US Sergey Kislyak. The only other visible words were “Kushner” and “vaguely remembers Flynn handling Russia on the issue.”

The DOJ even redacted Kushner’s date of birth and the names of his attorneys in its rundown of people who were present for the interview:

The memo was released to the outlets along with 298 pages of FBI memos on interviews with former Trump aides and DOJ officials.

A memo on former Trump strategist Steve Bannon’s interview revealed that the former adviser told Mueller’s investigators that Kushner had “attempted to back channel for communications with Russia during the transition,” likely referring to Kushner’s meeting with Kislyak, according to BuzzFeed.

“Neither Kushner nor Flynn mentioned the meeting,” the memo said.

Leopold took issue with the FBI’s redactions after the DOJ claimed it would only review classified information.

The DOJ “told us intelligence agencies were reviewing Jared Kushner’s FBI interview summary for classified information and that is why it wasn’t turned over to us last month,” he tweeted. “But the redactions here are attorney client privilege (not deliberative process).”

The redactions were marked with the code B5, which FOIA outlet MuckRock described as a “Withhold It Because You Want To” exemption. The outlet noted that “b(5) is a four-letter word in the FOIA community.”

Leopold said the outlet has “already started to fight these aggressive Exemption 5 redactions that we believe are improper.”

“There is another Kushner interview from 2018 that we are still waiting on,” he added.

Lina Hidalgo Had Never Run for Office Before. Now, She Manages a $5 Billion Budget for the Largest County in Texas.

Chief Alhaji Sulley Oubda Issah, Sarkin for Mosawa, Abeka in the Greater Accra region has urged all Muslims and Ghanaians