The Southern and Middle Belt Leaders Forum has called on the Nigerian Government to further investigate the origin and destination of two weaponised drones intercepted by military intelligence at the local wing of the Murtala Mohammed Airport, Lagos, on January 28, 2020.

SaharaReporters had on Wednesday exclusively reported how the items were seized by personnel of the Nigerian Army Department of Military Intelligence at about 5:00pm that fateful day at the cargo section where the suspicious package concealed in cartons were discovered.

Upon opening the cartons, the officers found parts of two highly weaponised drones and the supervisor told the man that brought it into the country, one Kelechi, to go and report the following day.

Investigation revealed that the following day Kelechi was asked to write a statement after which he was detained.

Upon interrogation at the National Air Defense Corps, Ikeja, the suspect claimed to be working for the Kaduna State Government.

Further investigation revealed that, Commander of NADC, Air commodore U.K Abdullah, later received a call from some unknown persons, who ordered him to release the man and drones.

Abdullah, it was gathered, later released the suspect and drones on January 30, 2020.”

Reacting to the incident in a statement signed by Yinka Odumakin (South-West), Gen. Cru Ihekire (South-East), Senator Bassey Henshaw (South-South), Dr Isuwa Dogo (Middle Belt), on Wednesday, the SMBLF said that, “This should be the kind of stuff Gen T. Y Danjuma said would not make us sleep if he should open his mouth if this is true.

“How on earth would security agents allow weaponised drones allegedly meant for Kaduna State go into the system in a country raising fuss over attempt by other states to employ guards without even Dane guns?

“As far as we know weaponised drones can only come into a country with the approval of the President and the end user must be the country’s armed forces.

“Indeed the manufacturer would follow the equipment until it gets to the end user as it is more or less a lethal weapon of destruction.

Whose call would the Commander allegedly receive to release the weapons and the suspect?

“How many of such dangerous weapons could have been brought into the system illegally by unscrupulous people with the lives of Nigerians in danger. This is frightening.

“We call on President Buhari to immediately order the suspension of Commodore U.K Abdullahi and curtail his movement while a judicial commission of inquiry is set up immediately.

“We demand a United Nations supervised mop-up of Nigeria for weapons of mass destruction and other illegal arms that some people may be stockpiling for possible genocide.” 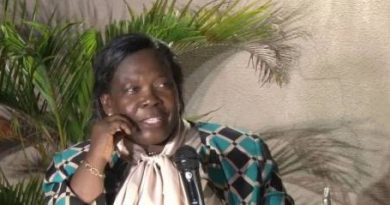 Remembering The “Profeseers” Of UNILAG By Joke Omotunde