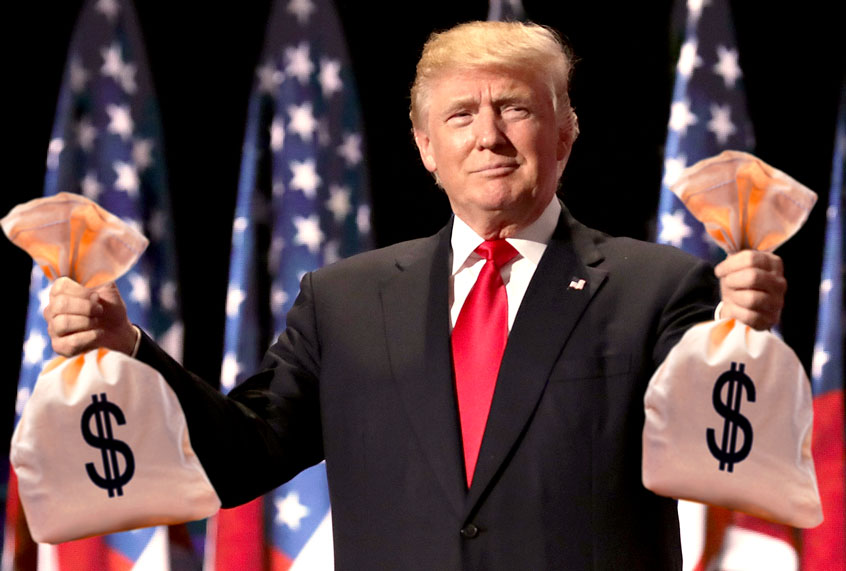 Arthur Miller warned that “millions of Americans are aching for Ayatollah.” Not even a man of the late playwright’s brilliance could have predicted that the leader who commands cultlike devotion from the increasingly rabid and dangerous mass of citizens who reject rationality — to say nothing of democracy — would turn out to be a tabloid fixture with a golden penthouse straight out of Liberace’s fantasies.

For reasons both understandable and more insidious, the mainstream media has obsessed over the “Trump base,” those being the voters who, as the president himself once boasted, would support him even if he “shot someone in the middle of Fifth Avenue.” Endless profiles of crusty Caucasians fill newspaper pages, all with identical or interchangeable details: the unemployed factory worker stares out the window while smoking a cigarette, lamenting the failures of the system and the repression of political correctness, but celebrating the tell-it-like-it-is, tough-guy virtues of his hero, the supposedly successful businessman who lies with every utterance, and who has enjoyed more privilege and more financial support from his family than the British royals.

The Trump cult proves that an alarmingly large amount of the electorate is unfit for participation in democratic society, but they are not the real problem. During a recent conversation I had with Jesse Jackson, the civil rights leader and former presidential candidate said this: “For all of this talk about the ‘Trump base,’ he actually has two bases. The first base is the little-red-hat boys. The little-red-hat boys get all the attention, because they are loud, and it is easier to tell that story, especially for big media companies. The second base is corporate America. That base is much more powerful.”

The little-red-hat boys might constitute an overwhelming majority among contemporary Republican voters, but they are a besieged minority in their own country. Trump’s approval rating, on his best day, has never risen above 50 percent, and in 2016, 45 percent of the voting age population did not bother voting at all. According to the most generous estimate, the little-red-hat boys are roughly 25 percent of the U.S. population — a distressingly large faction, but not exactly an impenetrable force field of political protection.

Multinational corporations, the big banks and other Wall Street firms and financial players are another matter. Together, they form the most influential force in American life, all but controlling the political system through a sophisticated network of donors, lobbyists and think tanks. While it is true that Trump has his detractors within the small club of the ruling class — think Jeff Bezos, Warren Buffett and Michael Bloomberg — the preponderance of the economic elite enable Trump, whether or not they like him. This remains true even as he provides presidential encouragement to racism, threatens to undermine the institutions of democratic governance and commits human rights abuses at the Mexican border.

For all the paeans to “diversity” and “multiculturalism” in company brochures and television advertisements, big business will continue to protect Trump. Its unpaid employees in the Senate — meaning the entire Republican caucus — is currently working overtime to ensure his acquittal, because Trump’s policies are a massive boondoggle for them.

Thomas Meany, in an excellent story on the bizarro-world of a recent Washington conference of “national conservatives,” observes that Trump’s most vociferous boosters on the “NatCon” dais appeared to overlook his “tricky ideological lifting.” Throughout his first term in office, Meany writes, “Trump fed the richest in society in the currency they prefer — dollars — and he fed his fans lower down with a temporarily effective substitute – recognition.”

The acknowledgement and solace Trump provides for the insecurities and prejudices of the little-red-hat boys conceals the true beneficiaries of his presidency. It should not come as a surprise that the White House has turned its back on beleaguered small towns throughout the Rust Belt, where the rural poor and middle-class families dangle over the edge of financial ruin. Instead, to return to Jesse Jackson’s analysis, Trump has “done everything big business wants.”

Some voters might recall the vomitous scene of Trump celebrating the passage of his tax cut on the White House lawn, alongside Vice President Mike Pence, then-House Speaker Paul Ryan, Senate Majority Leader Mitch McConnell and the entire Republican Congress. That socialistic giveaway to the wealthy has cost America $1.9 trillion. For that same staggering sum of money, the Trump administration could have forgiven all outstanding student debt, created a system of affordable child care for working parents, and eliminated tuition at community colleges.

Corporations that profit in the hundreds of millions, including FedEx, General Electric and Netflix, pay no taxes under Trump’s plan, while 10 million Americans of average means, especially those with a significant amount of income deriving from freelance work, actually saw their tax bills increase.

In one of his rare moments of honesty, Trump reportedly told a group of millionaires at Mar-a-Lago, “You all just got a lot richer,” boasting about his tax policy. Wages have increased at miserly rates over the past few years, and have not yet reached their pre-2008 crash levels. The president could not make the same boast to his screaming fans in Youngstown, Ohio, or Anderson, Indiana, or any of the other former manufacturing towns that voted for a resurrection of greatness.

Meanwhile, Trump, his party and too many dimwitted commentators throughout the media trumpet the soaring stock market as evidence of a “booming economy.” In reality, it is proof of Trump’s fealty to those who can afford to purchase condominiums in one of his buildings.

Fifty percent of Americans own no stock, and 75 to 80 percent of all stocks are in the portfolios of the top 10 percent of income earners. The fluctuations of the Dow, despite all the gleeful pronouncements of newscasters, have little to no bearing on the average citizen, most especially the unemployed workers desperately hoping for the return of a shuttered steel mill or decommissioned coal mine.

Trump’s blathering about toilets, light bulbs and dishwashers is the incoherent rhetorical manifestation of his administration’s dedication to destroying environmental protections and health and safety standards. What Republicans call their “deregulatory agenda” has allowed for more air and water pollution, threats to endangered species and private development in national parks. Vandalizing America’s environment and endangering the health of workers and consumers does nothing to improve the lives of the little-red-hat boys, but it does enhance the profits of multinational corporations.

The courts have overturned many of Trump’s worst assaults on the environment, but his judicial appointments are creating a future in which even a minimal social compact is in jeopardy. As servants to the corporate base, Trump judges routinely rule in favor of capital over people.

As the Senate trial of Trump’s crimes devolves into a farce, and with the outcome of the 2020 presidential election disturbingly unclear, there is no task more important than imposing limits on corporate power. “Money talks,” as the old phrase goes, and right now it is speaking in defense of Donald Trump and his entire class, and drowning out the voices of freedom, justice and decency.

If Trump had only his sycophantic voters, pathetically still chanting “lock her up!”, he would have retired to his garish palace long ago. Instead, the rich donors who have funded Trump’s half-billion-dollar war chest are shielding their servant from a conviction in the Senate, while attempting to buy his re-election in November. As long as they continue to pile up more treasure, they will be willing to put American land, law and lives on the auction block.

Trump treated the pandemic as “The Apprentice: COVID Edition”: It’s blowing up in his face

How will COVID-19 change the future? Look to history.

Internet and data service provider, K-NET has warned television stations that promote spiritualists and money doublers. “In recent days our