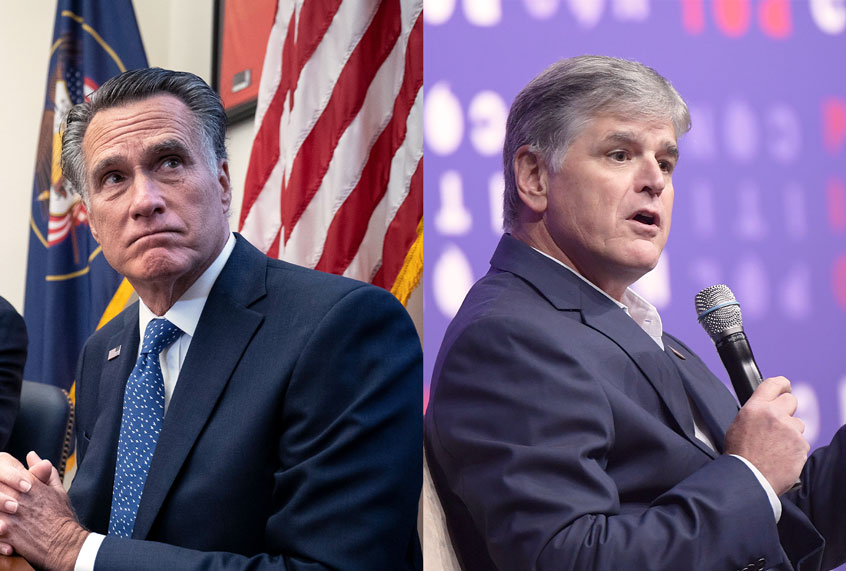 Fox News host Sean Hannity considers Sen. Mitt Romney, R-Utah, to be not only a “huge disappointment” but also unrecognizable because of his openness to calling witnesses in President Donald Trump’s impeachment trial.

“I liked Mitt Romney. Mitt Romney, I think, would’ve been a great president. In 2012, he was the better person to be president,” Hannity said during Tuesday night’s broadcast. “I thought I was friends with Mitt Romney. I don’t recognize this guy anymore — another one. He has been a huge disappointment. I thought he would have been a better president than Obama. We all went all in, wanted him to win. Like his family, wife, kids — wonderful people.”

The Fox News host concluded, “But this sanctimonious Trump hatred is getting old, especially as you watch the president accomplishing everything you said, Mitt Romney, you wanted to have happen in the country.”

Hannity, who is a close friend of Trump, is also an informal adviser to his administration. In 2012, the Fox News host claimed that he had urged Trump not to run for president as an independent. In 2018, it was reported that Hannity was a client of former Trump personal attorney Michael Cohen, which the Fox News host has denied. In November, former Ambassador to Ukraine Marie Yovanovitch testified that Secretary of State Mike Pompeo had called Hannity to urge him to stop spreading falsehoods about her. (Hannity denied ever talking to Pompeo.)

“What I was told by Phil Reeker was that the secretary [Pompeo] or perhaps somebody around him was going to place a call to Mr. Hannity on Fox News to say, ‘You know, what is going on? I mean, do you have proof of these kinds of allegations or not? And if you have proof, you know, telI me, and if not, stop,'” Yovanovitch told Congress in November.

She added, “And I understand that that call was made. I don’t know whether it was the secretary or somebody else in his inner circle. And for a time, you know, things kind of simmered down.”

According to a recent BuzzFeed News report on interview summaries with key witnesses who testified in former special counsel Robert Mueller’s probe of allegations of collusion between the Trump campaign and Russia, Hannity served as a “back channel” to Trump for indicted former campaign chairman Paul Manafort. The Fox News host also reportedly interacted with the Trump campaign in 2016 to help coordinate strategy, such as floating the idea of having Trump meet with Russian President Vladimir Putin.

By contrast, Trump and Romney have long had a tempestuous relationship. In 2015, Romney criticized Trump’s nascent presidential campaign after the then-reality TV star made racist remarks about Mexicans and insulted the war record of Sen. John McCain, R-Ariz. He called Trump’s refusal to disavow the KKK “disqualifying” and delivered a speech at the University of Utah in 2016 describing the future president as a “phony” and a “fraud.”

After Trump was elected, Romney condemned the president’s response to the racist protests in Charlottesville, Va. It has now been reported that Romney has urged his colleagues to call for witnesses in the impeachment trial, arguing that senators should hear from individuals with direct knowledge about the accusation that Trump abused the power of his office.

You can watch more below via Fox News: 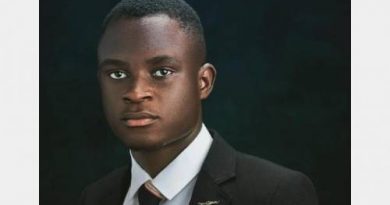 On ASUU And This Elite-style Struggle By Afolabi Alawode

How is the convention

Dear pastor anyone joining your church and speaking evil of former pastor is dangerous.
You may be his future topic ... See MoreSee Less

The greatest test of faith is when you don't get what you want, but still you are able to say thank you Lord ... See MoreSee Less

The Adolor of Uromi however, noted that amidst the celebration, Nigerians should reflect on the occasion, adding that “its not yet uhuru.”

In a Democracy Day congratulatory message he personally signed and made available to OLIKA REPORTERS, the former Minister of State for Defence said that looking back before 1999, Nigerians have every reason to be thankful for the democratic journey.

Nigeria is marking today June 12 as democracy day in honour of the winner of the 1993 Presidential election, Chief MKO Abiola. The business mogul turned politician had won the election in 1993, but was annulled by then military ruler, Gen. Ibrahim Babangida. Abiola later died on July 8th 1998 in detention following his arrest by the Sani Abacha regime while pursuing effort to reclaim his mandate.

Onolememen said, “Today, June 12 marks democracy day in our dear country. I rejoice in joining millions of citizens in this celebration. When we look back to what Nigeria was before 1999, we must be thankful for the democratic journey so far, away from those eras of military rules and interventions. Though it’s not yet Uhuru, the sacrosanctity of government by the will of the people cannot be discounted.

“I recall the memorable day on June 12th, 1993 when I filed out with millions other Nigerians in Lagos to cast my vote as a citizen with anticipation of hope away from the military rule; little did I know that very election would be truncated.”

Arch. Onolememen noted that there are still teething challenges with the nation’s democracy, but assured that brighter days are ahead.

“Although the ill feelings are there, I am happy we were able to move on to restart another democratic journey from 1999 which has since taken a foothold. Democracy is not an event; on the contrary, it is a process. The setback of 1993 we experienced was a lesson, a bitter one at that. Nevertheless, we resolved to move on to capture the beauty of democracy, when it finally berthed in 1999. We must come together today to safeguard this democracy no matter what the challenges are.”

According to him, “t is through unity the strong foundation of democracy is built. So let’s remain focused on the merits of what democracy can afford with one resolve. As is often said, the worst form of democracy is better than the finest of military rule. In a democracy, your voice is heard, in the military, regime, it is drowned.

“We rather are heard when things are wrong than be silent with the pretenses of happiness. Let’s not deceive ourselves; from 1999, the journey has not been as smooth as we envisaged. However, we have been thrusting through the challenges with the temerity of those who are determined, resolute, purposeful…let’s continue to keep the open flames of democracy alive.

He addedthat, “the democratic journey never ends, let’s hope we shall hand over a brighter flame to the next generation who will also pass it on. Let’s continue to uphold the tenets of democracy, as this day signifies. It’s the only culture that can guarantee us meaningful rights, freedoms of associations, speeches, and liberties.

“These are fundamental rights democracy alone can guarantee without being determined by factors such as social status, ethnicity, religious affiliations, or even place of birth. Our union and pacts should be with lovers of freedom, not those who have every reason to thwart the will of the people for personal gains. Let’s guard our hold to human dignity with significant jealousy.”

He also advised Nigerians not to take to violence, adding that dialogue and peaceful discussions are more beneficial than rancour and unrest.

“Let’s not buy into the market sales of those who think violence can be used to achieve their ideal sense of freedom. Rather, let’s be in union with those who negotiate through dialogue their preferences. Wanton wastefulness and destruction are not part of democratic norms and values; dialogue remains a more potent instrument for berthing a better society.

“Terrorism in a hundred years can never achieve what talking on negotiating tables will achieve within days. Let’s, therefore, rely on the hope of dialogue and engagements. We must continue to participate in governance and askew violent approach as a means to solving problems.

“The totem poles on which our democracy stands were established by sacrifices of lives in time past and are being held today by both your hands and mine. Despite the weight, let’s keep holding on. The end justifies the means.

“The challenges should not be enough for us to drop the precious gifts that democracy itself can afford because it is the will of the people, the majority of them, and what we should be haggling for is good governance through democratic means, not alternatives.

“We are the solutions to our challenges because the challenges of democracy in Nigeria are human-made. We know it’s difficult to endure the slow pace of democracy, we must however muster the will because the alternatives to democracy have their consequences which are too gasping to comprehend.

“It’s only under a democratic rule we can sit to talk about the direction of governance and challenge to debates those to whom we have submitted our sovereignty.”

According to him, “In retrospection, therefore, let’s remember Chief Moshood Kashimawo Olawale Abiola whose victory was truncated on June 12th, 1993. That presidential election was adjudged to be the fairest and freest in the annals of our history. Even in prison, MKO was resolute that his stolen mandate must be returned and to this, he eventually lost his life while in detention.

It is on this note that I urge President Muhammad’s Buhari to revisit the latest amendment to to the Electoral Bill, and sign it into law, to guarantee free and fair elections in Nigeria at all times.

“It is now instructive for us to carry on the resiliency and steadfastness of Moshood Abiola in defending the ideals of democracy and democracy itself from those who wish to pull the standing poles down. I wish all Nigerians Happy Democracy Day,” he added. ... See MoreSee Less

A genuine leader is never hard to identify.

What a focus leader

Great one from a great leader.. God bless you Architect Mike Onolenmemen, you are a gift to Esanland and our generation

Adolor is indeed a visionary leader. No doubt, He will do us as Esan Nation proud if given any political opportunity to serve. Sir more grace to you! Mr okoduwa thanks for sharing

A born leader in a reputable distinguished outstanding personality.

Very much on Point, a Powerful Voice from the Bulldozer, a Patriotic Nigerian with a large heart

Adolor is always on point. a focused and dedicated leader.

Africans can only progress if they unchain themselves from the shackles of religion, politics — Apostle Amoako Attah