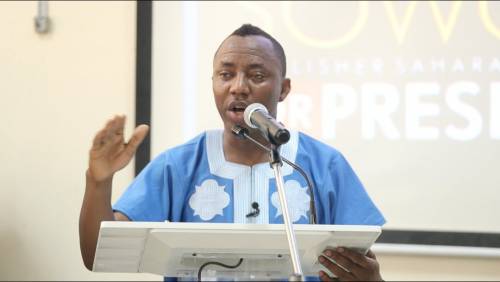 Comrade Omoyele Sowore means a lot of things to different people. Some see him as a hero, who has been committed to a better society and has been consistent about his cause since the 1980’s. Others view him as a mere rabble rouser, who is a constant attention seeker that loves to make a mountain out of a molehill.

After being held by the Department of State Services for over four months, he was released on bail on Christmas Eve 2019 after so much pressure was piled on the government agency. Critics blasted the agency for not obeying two previous court orders for disobeying court orders.

Uhuru came for him but it came at a huge price. His international passport was seized and he wasn’t allowed to travel out of Abuja so as not to jump bail like Nnamdi Kanu.

It will be a while before his trial will take place and it is understandable that the active activist is bored and tired of being largely inactive. He opted to be a volunteer teacher to teach government in a secondary school in Abuja. The principal on sighting the activist immediately took to his heels. The amiable comrade met other teachers and exchanged banters with them but couldn’t fulfill his desire to make an impact in the lives of the young ones.

It is not surprising that the principal ran away as the human rights and anti-corruption activist is an extremely controversial figure. He was expelled twice from the University of Lagos where he cut his teeth in human rights advocacy and almost didn’t graduate from the premier institution. He had trouble with the Adamawa State Government when he was undergoing the compulsory National Youth Service Corps as he wanted to turn the conservative radio station into a radical one at the height of General Sani Abacha’s dictatorship. After his youth service, getting a decent job became an impossible task as he was a marked man with no employer willing to take the risk for fear of being sanctioned to use the Nigerian parlance by ‘the oga at the top.’

He found his way to the United States shortly before the return to democracy in 1999 and worked for a Roman-Catholic charity before teaming up with a Nigerian journalist to set up Elombah.com. They had a falling out barely after a year and he went solo to establish Sahara Reporters which has been a thorn in the flesh of corrupt governments in the country. It has broken stories that the traditional media has failed to touch with a long pole and is a trusted source for many Nigerians and foreigners, who have a deep interest in the Nigerian project.

He became a presidential aspirant last year as he wanted to merge talk with action. It wasn’t surprising that he lost the election as the terrain wasn’t clearly ready for the man of change.

The principal may have been afraid that the activist would surreptitiously radicalise the students, who may end up being uncontrollable the moment ‘their eyes became open.’ He obviously didn’t want to lose his job as the buck stops on his table and so wasn’t willing to take the risk. In a country where jobs are so difficult to come by, it would have been ‘fool hardy’ to lose his when he had a family to feed at home. He wasn’t ready for his students to embark on an adventure to nowhere like that of Tom Sawyer and Huckleberry Finn. Such remained realistic in English literature and not in Nigeria where nothing works. The principal was obviously scared of a possible DSS surveillance on his school.

Nigeria is a cesspool of irony as we have witnessed the likes of Owelle Anayo Rochas Okorocha and Ogbeni Rauf Adesoji Aregbesola, who became celebrity teachers to some students while they held sway as governors. Aregbesola even went as far as donning the students’ uniform. If these politicians could teach the students for a mere publicity stunt, why shouldn’t Sowore be allowed to do the same? It is the case of what is sauce for the goose should also be sauce for the gander.

The comrade wanted to render a free service to the students and he wasn’t asking for any form of remuneration. He wanted to share his wealth of experience gathered over time to them at no cost. In the developed societies, we have the presence of celebrity tutors who add a lot of spice and flavour to the world of teaching. For instance an experienced journalist could be hired on a locum basis to share his or her rich experiences with journalism majors without necessarily being a full-fledged academic. A business mogul could be hired to teach MBA students with the experiences of the titan coming in handy and to add gown with town so as to give the students a practical feel. If Sowore could be appreciated in the US where he is an adjunct lecturer in the City University of New York where he teaches African history, why can’t the same gesture be extended to him in his so called motherland? The hypocrisy is so nauseating with the loss being on Nigeria.

We wish him the best of luck with his trial and hope that he can be free again once more to rove as much as he likes and more importantly to be reunited with his family especially his wife, Opeyemi, who stood by him through thick and thin. 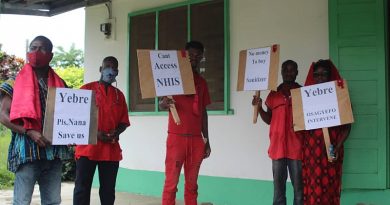 LEKKI: ICC can prosecute those who shot at unarmed protesters if… – Uwaifo

US born Nigerian Beauty Queen, Convener of America Kids Multicultural Fashion Show, Philanthropist, Humanitarian and an Ambassador of the Nigeria