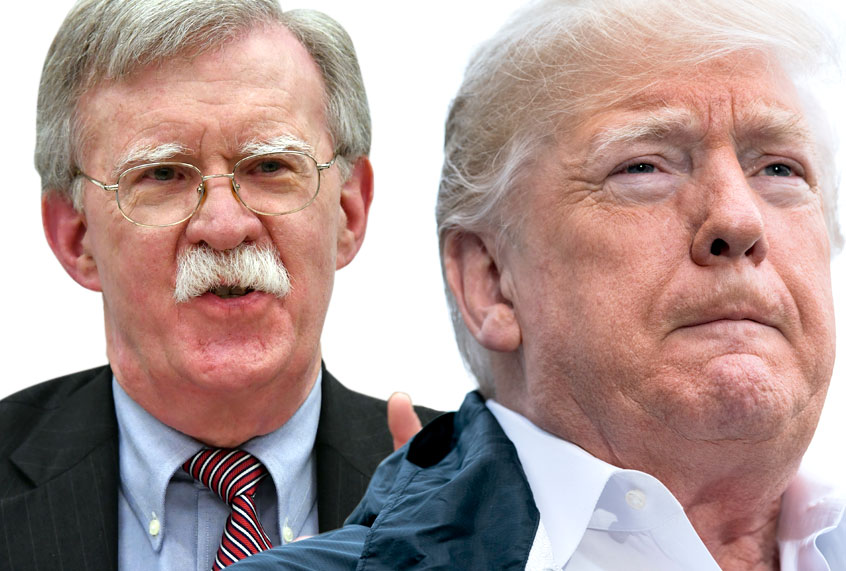 Many people wondered what exactly House Speaker Nancy Pelosi was thinking when she decided to delay delivery of the articles of impeachment against President Trump until after the holiday recess. That question has never been adequately answered, but if it was because Pelosi had a feeling — or perhaps knew for sure — that more evidence of Trump’s abuse of power would trickle out almost daily, she was absolutely right.

From White House emails revealed through the Freedom of Information Act to Rudy Giuliani’s “associate” Lev Parnas passing on documents and tapes it’s been a steady drip, drip, drip ever since the middle of December. But none of it is as important or as incriminating as the potential testimony of former national security adviser John Bolton. Keeping him from testifying in the impeachment trial has been Majority Leader Mitch McConnell’s singular focus from the very beginning. This week we found out why.

As I wrote on Monday, the New York Times’ reporting about Bolton’s book has upended what was to be an open-and-shut trial with no testimony or evidence. The plan was to feature some dull arguments by the House managers and the president’s lawyers, followed by a few questions from senators and a quick vote before the Super Bowl, where Trump is slated to have a “yuge” victory interview with Sean Hannity. Basically, it was to be a constitutional wham, bam, thank you ma’am.

It isn’t working out the way they planned. The president’s defense has been all over the place, I suspect because his lawyers knew the outcome of the trial was fixed so why put any more effort into it than you have to? They’ve claimed that Democrats are trying to steal both the 2016 and the 2020 elections, that Joe Biden is the real criminal, that the president did nothing wrong but that even if he did you can’t impeach a president for abusing his power. It pretty much comes down to, “Whatever. We have the votes.”

As it turns out, the White House has had a copy of Bolton’s book since late December. The lawyers say they didn’t know anything about it and McConnell insists that nobody told him about it either, all of which strains credulity, especially if Bolton’s contention that copies were made in the White House is true. Certainly, Trump’s comments about Bolton’s potential testimony posing a “national security” problem indicate that the administration has been contemplating ways to keep the book from being published.

Bolton may be a far-right warmonger, but he’s got absolutely no incentive to lie about this. I’m sure he’s being paid a lot of money for this book but with all the money sloshing around in Trump World, it’s hard to believe he couldn’t have put that much together in some other way. Virtually everyone around Trump seems to be making big bucks lobbying for foreign governments. If Rudy Giuliani could do it, surely a former national security adviser would be in much demand. (And unlike Rudy, Bolton has an unquestioned reputation for honesty, if nothing else.)

It’s far more likely that ego is driving Bolton. His is almost as large as Trump’s, and when the president refused to listen and insulted him publicly, Bolton decided to fight back rather than submit as everyone else has done. On Tuesday he got a little back-up from another former insider, former White House chief of staff John Kelly.

If John Bolton says that in the book, I believe John Bolton. Every single time I was with him … he always gave the president the unvarnished truth.

It’s nice of Kelly to weigh in on Bolton’s behalf, but let’s face it: He, like so many others, could have blown the whistle long before now. Instead, he’s chosen to make vague references to Trump’s incapacity while never really putting himself at odds with the president’s ferocious defenders. You can say the same thing for former Defense Secretary Jim Mattis, former Secretary of State Rex Tillerson, former Director of National Intelligence Dan Coats or any number of others who have intimate knowledge of the Trump administration’s internal chaos and could have stepped up at any time but chose not to.

Bolton is already paying a price. According to the Washington Post, the online smearing began almost immediately, with Trump loyalists promoting an old social media post full of what the paper calls “innuendo and half-truths” about Bolton being in cahoots with “cartels, terrorists and Iran.” That suddenly went viral, and within hours memes like “Book Deal Bolton” were trending and Fox News was echoing the charges.

Bolton was a Fox News contributor for 11 years. But these days at that network, anyone whose fealty to Trump is in question winds up with their head on a pike. Metaphorically speaking, of course. The network’s most flamboyant Trump sycophant, Lou Dobbs, immediately dismissed Bolton as a traitor saying:

Bolton has sadly reduced himself to nothing more than an unprincipled tool of the Radical Dems and Deep State: And he’s sacrificed his integrity to sell a lousy spiteful book, pathetic …

The irony is that, as Vanity Fair points out, Bolton was pushed hard for his White House job by Fox News and Trump rejected him at first because he hated the walrus mustache. Ultimately he hired him anyway because Bolton defended him so fervently on Fox News every night.

But it isn’t just Fox. Talk radio is in a tizzy as well. Rush Limbaugh was very upset, saying “if this passage in the book is true, and this is actually what’s intending, it’s not the John Bolton I thought I knew, this kind of disloyalty.” Mark Levin thinks Bolton is “disgruntled.” another term you hear being used a lot in right-wing media.

I have no doubt Bolton is settling scores. That doesn’t mean he’s lying. After all, other witnesses, including former National Security Council Russia expert Fiona Hill, have testified to his “disgruntlement” with Trump and Giuliani’s Ukraine “drug deal.”

In any case, this means that McConnell’s carefully laid plans to have a quick and dirty impeachment acquittal so Trump can hold a triumphant State of the Union address next week and rub his impunity in Democrats’ faces have been disrupted. As of Tuesday night, McConnell is reportedly saying he doesn’t have the votes to prevent witnesses.

But according to CNN, this is really just Mitch’s way of putting pressure on anyone who’s thinking of voting the wrong way. I’m guessing Democrats will get three Republicans to vote for witness testimony — but not the four they require. The rest of the Senate GOP will hold hands and jump over the cliff together, in the hope that we’ll be dealing with a global pandemic or World War III by November, so voters simply won’t remember how they covered up Trump’s “high crimes and misdemeanors.”

Short of that sort of catastrophe, however, I suspect Republicans are headed down the slippery slide. Democrats and vengeful NeverTrumpers will do everything in their power to make sure these people’s blind loyalty to a corrupt president will be the first thing anyone thinks of when they see their names on the ballot in November.

MBS and Putin are fighting an oil-price war: The world must seize the opportunity