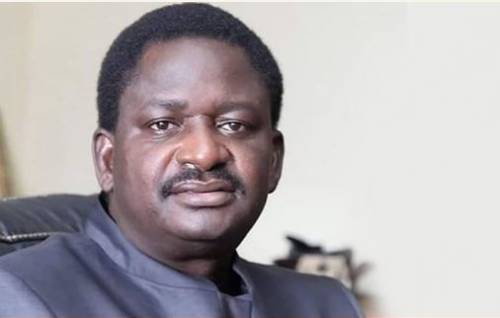 In a country where Nigerians are invariably losing their lives, livelihood and right to free speech, many government officials earn their paychecks propagating duplicitous commercial messages intended to deflect this truth. One of such officers is Presidential media aide, Femi Adesina.

His response to questions in a recent interview with Channels TV concerning growing insecurity in Nigeria deeply exposed his romance with denial and embodies the grossest form of class solidarity.

When confronted with statistics depicting the upsurge of insecurity, Mr Adesina answered saying “It is not as bad as you make it seem…because we know what the situation was as of 2015 and we know what it is today despite the reversals in security, it is still not as bad as it used to be in this country….Yes, there was a bomb or two today (the day of the interview). There was a time that there were five, six, ten bombings in a day in this country.”

In that awkward session with the show presenter, the presidential media mouthpiece claims that corruption and insecurity have been on the decline compared to when they assumed office in 2015. But on the flipside, statistics available to Nigerians and the world paints a different picture.

Recently, the Corruption Perceptions Index published annually by Transparency International since 1995 scores Nigeria 26 with a ranking of “Perceived as more corrupt”.

The Institute for Economics and Peace per its 2019 Global Terrorism Index, has also ranked Nigeria the 3rd most terrorized country in world with an impact rating of “very high”.

A critical analysis of both indexes shows that corruption and insecurity in Nigeria has not experienced any improvement since 2015.

This depicts that Nigeria is still under the grip of terrorism and corruption under President Buhari as it was under his predecessor, Dr Goodluck Jonathan.

Again, these are publications by institutions whose statistics they used to describe the previous government as weak, corrupt and incompetent.

This is a pivotal time and space to remind Mr Adesina that Nigerians voted for change that will go beyond presenting political statistics of mendacity.

For the time being, momentous questions well-meaning and God-fearing Nigerians are asking are is Mr Femi Adesina merely fraud who caters to a privileged audience for profit, or does he veritably believe the things he says? Is he, and his principals, aware that Nigerians have grown tired of the heavily guarded political class, oftentimes born into wealth, who arrogantly lecture poor and low-income people on how they could live better? Why should Nigerians stop believing what the media reports? Is the worry that the media and international institutions and watchdogs correct that our government is now helpless such a big concern to our current leaders so much that they prefer to show the middle finger to statistics from institutions they once echoed to convince Nigerians to send their predecessors packing?

While Mr. Adesina and his principals might not provide Nigerians with honest answers to these questions, it is important they know that with their backs against the wall, Nigerians are poring through strategies to thrive despite ubiquitous Insecurity and corruption.  Nigerians are battling with challenges they never signed up for.  But perhaps more than overly simplistic, Mr Adesina’s line of reasoning is patently and unabashedly offensive to Nigerians who do not belong to the protected and privileged class.

By the way, where does Mr Adesina live? Answer is most assuredly around people much like himself: protected and privileged class.

Suggestion here, in conclusion, is if Mr Adesina will spend a month working on security report in local governments or IDP camps in Northeast and other troubled parts of Nigeria, it might help cure his intentional myopia which is evidently preventing him from seeing what intensely terrorized Nigerians currently see and experience. This may not only help change his infantile logic of attempting to fault facts on national television but may also help him understand and review his recent episode of shamelessness which has since exposed him as a barefaced raconteur of spurious deep state.