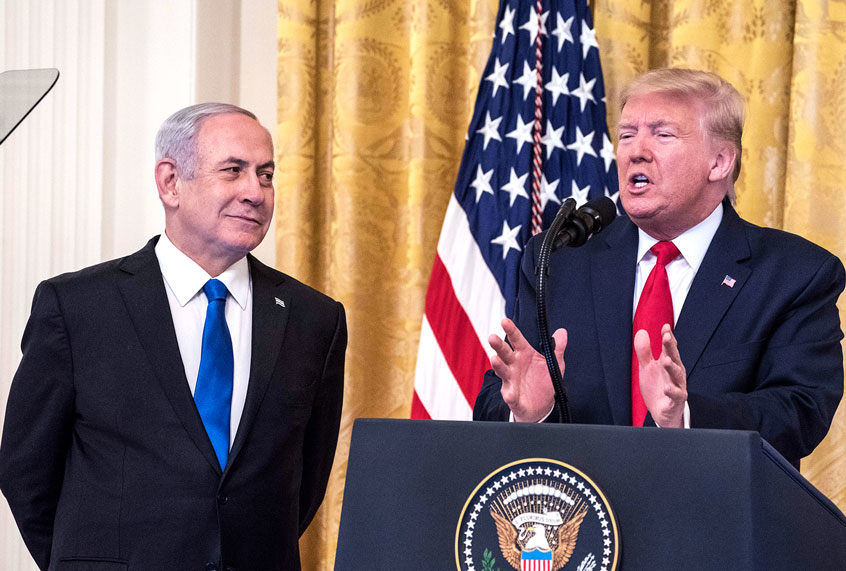 Trump, who is on trial in the Senate, and Netanyahu, who was formally indicted on corruption charges on Tuesday, called the deal a “win-win opportunity for both sides. But Palestinian leaders rejected an invitation to the announcement, which they called a “conspiracy aimed at undermining the rights of our Palestinian people.”

The deal would give Israel “most of what it has sought over decades of conflict,” according to The New York Times. The plan would guarantee that Israel would control Jerusalem as its capital and not require Israelis who illegally settled in the West Bank to leave. Palestine would “more than double” its territory and a capital would be established in eastern Jerusalem, where “America will proudly open an embassy,” Trump vowed Tuesday. The president also pledged to provide $50 billion in international funding for the Palestinians, who would be temporarily barred from forming a military under the plan.

“My vision presents a win-win opportunity for both sides — a realistic two-state solution that resolves the risk of Palestinian statehood into security,” Trump claimed in a room with no representatives of the Palestinian government. “President Abbas, I want you to know if you choose the path to peace, America and many other countries — we will be there. We will be there to help you in so many different ways.”

Kushner, who led the planning efforts, already presented the financial portion of the deal, which was immediately criticized by Middle East experts and the Palestinians themselves. Unlike past peace talks, Kushner did not involve both sides in negotiations, instead crafting the plan with his team in close consultation with Netanyahu’s government, according to The Times.

Kushner has not held talks with the Palestinians since 2017, when Trump moved the U.S. embassy from Tel Aviv to Jerusalem, which many experts, and the Palestinians themselves, said would likely end all hope for a two-state solution. After moving the embassy, the Trump administration cut funding to Palestinian areas and closed the Palestinian diplomatic office in Washington.

Trump said “no Palestinians or Israelis will be uprooted from their homes.” The Kushner-led plan sets Israel’s borders far into the West Bank.

Netanyahu called the plan a “realistic path to a durable peace” that “strikes the right balance where others have failed.”

Netanyahu said he would agree to begin negotiations with the Palestinians “on the basis of [Trump’s] peace plan.”

“As everyone knows, I have done a lot for Israel,” Trump said. “It is only reasonable that I have to do a lot for the Palestinians — or just wouldn’t be fair. Now, don’t clap for that, OK. But it’s true. It would not be fair.”

Palestinian leaders roundly rejected the proposal before it was even announced.

“We reject it, and we demand the international community not be a partner to it because it contradicts the basics of international law and inalienable Palestinian rights,” Palestinian Prime Minister Mohammad Shtayyeh said Monday. “It is nothing but a plan to finish off the Palestinian cause.”

The plan was widely criticized in the U.S. for ignoring key issues which have held up peace talks in the past — and for cutting Palestinians out of the process entirely.

“It essentially ignores all of the Palestinians’ desires, as the plan was drafted without any input from the Palestinian side,” Vox’s Alex Ward wrote. “It’s pretty hard to make a historic deal when one side isn’t part of the negotiations.”

Hagai El-Ad, executive director of Israeli human rights group B’Tselem, said the plan offers Palestinians neither rights nor a state “but a permanent state of Apartheid.”

“This plan was negotiated with no one but the Israelis, and thus it’s not a peace plan at all,” Sen. Chris Murphy, D-Ct., tweeted. “Peace can only be achieved through agreement between Israel and the Palestinian people. By setting these new terms, it makes it harder for Israel to compromise later. Any claim that this plan envisions a Palestinian state is just false. The plan allows Israel to control all security matters inside the Palestinian ‘state’, and thus it’s not a state at all.”