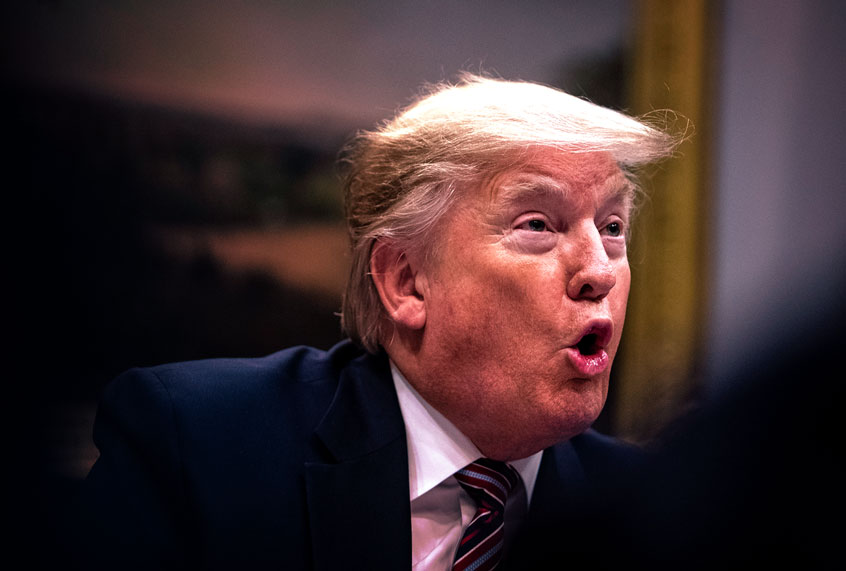 Donald Trump is an authoritarian and an autocrat. For him and others of such ilk, violence is political currency in the form of raw power. Autocrats and authoritarians such as Trump are de facto crime bosses who just happen to be leaders of their respective countries.

As such, Donald Trump uses violence in an effort to intimidate his enemies and control the public. Trump also uses violence to control his allies, servants and other supporters.

The most recent examples:

One of Trump’s enforcers allegedly threatened any Republicans who dare to want an honest impeachment trial: “Vote against the president and your head will be on a pike.”

On Sunday, Trump himself, enraged over his impeachment, threatened House Intelligence Committee chairman Adam Schiff on Twitter: “Shifty Adam Schiff is a CORRUPT POLITICIAN, and probably a very sick man. He has not paid the price, yet, for what he has done to our Country!”

Paula White, Trump’s “spiritual adviser” and a prominent Christian hustler, has claimed that Democrats, liberals and others who oppose Trump are possessed by the devil and demonic forces.

In a video released on Friday (originally recorded at a Jan. 5 sermon) White even went so far as to use magical enchantments, calling for those who oppose Donald Trump (“satanic forces”) to have their babies die in the womb.

The 53-year-old megachurch pastor, who recently joined the White House Office of Public Liaison as a religious adviser, delivered the remarks during a sermon in which she inveighed against a variety of forces, including anyone who sought to harm Trump.

She also condemned “any hex, any spell, any witchcraft, any spirit of control, any Jezebel,” and “anything that the enemy desires through spells,” according to the footage.

Impassioned rhetoric is one of White’s calling cards. She has used the same type of language in numerous rallies and public events, including a reelection rally for Trump in June.

Trump’s most recent threats of violence are part of a much larger campaign of stochastic terrorism which began with his presidential campaign in 2015 and continue to the present.

Trump, his spokespeople, conservative media and other agents have repeatedly slurred leaders and members of the Democratic Party as being traitors who should be put in prison or even executed. Trump’s impeachment has amplified those threats of violence.

The Trump regime’s campaign of stochastic terrorism has been horribly effective. Hate crimes and other racially motivated violence against nonwhites, Muslims and Jews have reached record highs during Trump’s time in office. Mosques and Jewish temples have been attacked by white supremacist terrorists who are encouraged by the Trump regime and its leadership role in the racist and nativist global right.

From Charlottesville to Texas, the Trump regime’s use of stochastic terrorism has been lethal.

Trump’s cultists such as Cesar Sayoc Jr., and many others, have either participated in or been apprehended while planning terrorist and other violent attacks against Donald Trump’s “enemies.”

Nancy Pelosi, Adam Schiff, other prominent Democrats, the Ukraine whistleblower, National Security Council aide Lt. Col. Alexander Vindman, and other witnesses to Trump’s crimes who are following the law and acting in service to the Constitution and the American people have been targeted for violence by the Trump regime.

Trump’s excuse-makers, enablers, normalizers, human puppets, and other sycophants will say, on cue, that this is all just “Trump being Trump.” He is “not a traditional politician,” his detractors are “too sensitive” and anyway “Trump is just kidding.” He speaks the language of the “average person” because he is a “populist” not restrained by “political correctness.”

These deflections, taken together, are the stuff of propagandists. The facts, the truth and empirical reality are their enemies. The diktat is simple: Donald Trump is always right. His troglodyte authoritarian lemmings have internalized the Great Leader’s commandments.

It is true that Trump is just being Trump. It is also true that Trump is not a “traditional” American politician. That is precisely why he should be removed from office. He is a demagogic authoritarian who by temperament, values, morals and behavior is not qualified to be president of the United States.

As for metaphors and “jokes”? Nonsense. Authoritarians are always to be taken seriously. Their so-called jokes and metaphors are a way of testing the norms that they will soon smash.

Too many people in the mainstream corporate media, the pundit class, and elsewhere are also aiding and abetting Trump’s campaign of stochastic terrorism and other violence when they minimize the reality of political violence by speaking in the future tense or using conditional language. (“There could be violence”; Trump “should moderate his tone.”)

If the mainstream media and the chattering class were being responsible truth-tellers committed to the facts, they would instead speak in a unified declarative active voice which foregrounds reality: Political violence has already occurred at the behest of Donald Trump and his allies.

Most important, Trump’s and his agents’ use of stochastic terrorism is a barometer for the health of American democracy.

Writing at the New Yorker in the wake of the Pittsburgh mass shooting last year, John Cassidy connected institutional and historical failures to the Age of Trump and this moment in the history of our nation:

The horrible events of the past few days have confirmed that the United States, while it remains a great nation, is a country trapped by its past. Despite a rising tide of gun violence and political extremism, it has repeatedly failed to adapt its institutions and its laws — particularly those relating to guns and the online spread of hate speech — to an age of technology-enabled savagery. Now the very foundations of the political system that so many Americans take for granted seem to be under threat. …

Is that a bit alarmist? On the basis of what we know, Robert Bowers, the forty-six-year-old loner who carried out a massacre at a synagogue in Pittsburgh on Saturday, and Cesar Sayoc, Jr., the former male stripper from Florida who has been charged with sending mail bombs to opponents of President Donald Trump, are both alienated people who have lived small lives filled with resentments and failures. Nonetheless, the larger threat that their acts of terror represent shouldn’t be understated. When opposition politicians cannot open their mail without fear of being blown up, when people of religion cannot attend their houses of worship without fear of being shot to death, and when the President cannot forswear partisan attacks for more than a few hours after a deadly act of terror, then liberal democracy is malfunctioning in tragic fashion.

Writing at the Carnegie Endowment, Richard Feldman, a senior fellow in the Democracy, Conflict, and Governance Program, explains how violence is a symptom of a failing civil society.

Privilege violence is not just a problem of the state. It facilitates a process whereby society itself begins to normalise, accept and excuse violence.

The process is known as decivilisation — and it can happen anywhere…. The idea of decivilising was coined by Norbert Elias in the 1930s. As a Jewish man living in 1930s Germany, he couldn’t help but notice what was going on around him. He described a process that most violence scholars now accept heralds a slow-motion disaster.

First, people lower their inhibitions, saying and doing things that were previously considered beyond the pale. Language coarsens and is used to dehumanise the ‘other’; people become ‘animals’, police become ‘pigs’. As inhibitions lower, people who would not themselves use force are willing to excuse it in others. Society atomises and empathy declines. Gradually, the group willing to use violence for political or personal ends expands. Meanwhile, the polarised discourse makes policy solutions harder.

Feldman’s observations are an apt warning about America in the age of Trump and the even worse future that awaits if Trumpism is not pulled out by the root.

The American people and the country’s responsible leaders should have heeded political scientists Steven Levitsky and Daniel Ziblatt’s warnings in their book “How Democracies Die”:

We know that extremist demagogues emerge from time to time in all societies, even in healthy democracies. The United States has had its share of them, including Henry Ford, Huey Long, Joseph McCarthy and George Wallace.

An essential test for democracies is not whether such figures emerge but whether political leaders, and especially political parties, work to prevent them from gaining power in the first place — by keeping them off mainstream party tickets, refusing to endorse or align with them and, when necessary, making common cause with rivals in support of democratic candidates.

Once a would-be authoritarian makes it to power, democracies face a second critical test: will the autocratic leader subvert democratic institutions or be constrained by them?

In the show trial on Capitol Hill this week, Senate Republicans will vote to acquit Trump of his obvious crimes.

Last Friday on Twitter, Sen. Brian Schatz, D-Hawaii, perfectly previewed what Trump’s “defense” will look like: “It’s about to be a dark carnival of distractions, accusations, misdirections, outright lies, and fake outrages. Worse than usual. Keep your eye on two things. 1) what did the President do? 2) how did the Senators vote?”

After Trump’s acquittal, his political chorus will continue to sing his praises. Powered by a mix of self-righteousness, white male rage, and right-wing victimhood, entitlement and grievance, Trump will likely seek revenge, launching a fully unrestrained attack on the Constitution, the rule of law, American democracy, the Democrats, liberals, progressives and any person or group who dares to try to hold him accountable.

The American people and the Democratic Party have one option left to stop Donald Trump. On Election Day in November they must vote him out of power. To this point, America does not seem up to the task.