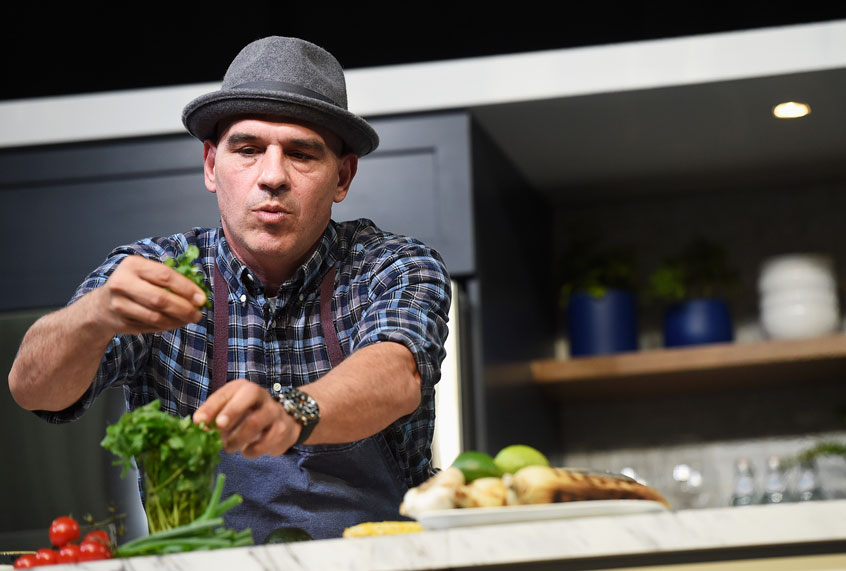 As one of the preeminent chefs in America, James Beard Award winner Michael Symon needs no introduction. You know him from the Food Network as an Iron Chef and the host of “Burgers, Brew & ‘Que.” Before that, he was the co-host of the long-running ABC talk show “The Chew.” A prolific author, his sixth cookbook hit shelves this week.

Fix It With Food is no ordinary cookbook. Like Playing With Fire, his last collection of recipes, it was not born out of one of his award winning restaurants. Like his 5 in 5 series, it was not about how he gets food on the table quickly for his family. A former wrestler who was later diagnosed with external lupus and rheumatoid arthritis (RA), Symon writes that he “resigned to the fact that pain (and pain pills) would be a regular part of my life.”

Unsatisfied with that answer, Symon eventually turned to his diet for answers. After doing “The Reset” for 30 days on national TV, he learned how certain foods, specifically dairy and sugar, were my triggers for his inflammation. After making simple adjustments to his eating habits, he no longer self-medicates. In Fix It With Food, Symon introduces you to a revised “10-Day Fix,” which you can do in the comfort of your own home and without feeling cranky. The results could be life-changing.

When Symon recently stopped by Salon Talks, we paused for a moment from the conversation about his new book to show off his fun side, as well as answer one very personal question about why he cooks:

What’s your favorite thing to grill?

Oh, I don’t have a giant sweet tooth. My mom’s baklava.

This is one thing that I’ve gathered as I’ve been writing about food. With all of the prep, the time and the effort that goes into making a dish, cooking is about more than a meal. It’s nourishing something inside of us.

For me, that’s often my Mexican American heritage. My grandmother is from Mexico, and she’s my hero and my matriarch now that my mom is in heaven. But some of my fondest memories of my childhood are in the kitchen with her, and that really connects me not only to my culture but to my family, too. I know that a lot of times I’m nourishing that side of me — that loss and also that connection. What are you trying to nourish or feed when you cook?

Very similar. I mean, food brings people together more than most things, and it’s the one thing where people have — certainly, they have opinions on it like they have on everything else. But it always brings joy to people, and it always, I think, reconnects you with your culture and your family. And maybe makes old friends and new friends understand the way that you grew up and were raised. It tells a story without speaking.

Great food tells you about the person that cooked it — without you having to verbally explain it. And I think that sometimes people just get too caught up in the trying to be perfect and the perfection of food instead of just the joy the soul that goes into it and how many people you can make happy with it. And I think that’s the greatest lesson: You don’t have to be perfect, but you should pour yourself into it. And the people that come to enjoy it with you should understand you better after they have the meal.

When I cook, if they’re coming over, they know they’re getting Mexican food. But they love it.
Nice. Yes, it gives them a peek into your culture.

1. Set a large heavy-bottomed skillet over medium-high heat. Add the olive oil and heat to shimmering, then add the ground beef. Cook until well browned, stirring occasionally to break up the meat, about 5 minutes. Drain the fat from the pan. Season the meat with a pinch of salt and a twist of black pepper, stir in the pomodoro sauce, and bring to a simmer. Taste and add salt and pepper if needed. Remove from the heat and set aside.

You’re not done yet! Click here to access the remainder of the best lasagna recipe ever (that doesn’t actually have noodles).

A book of condolence has opened from today to Friday, November 20 at the Foyer of the Accra International Conference