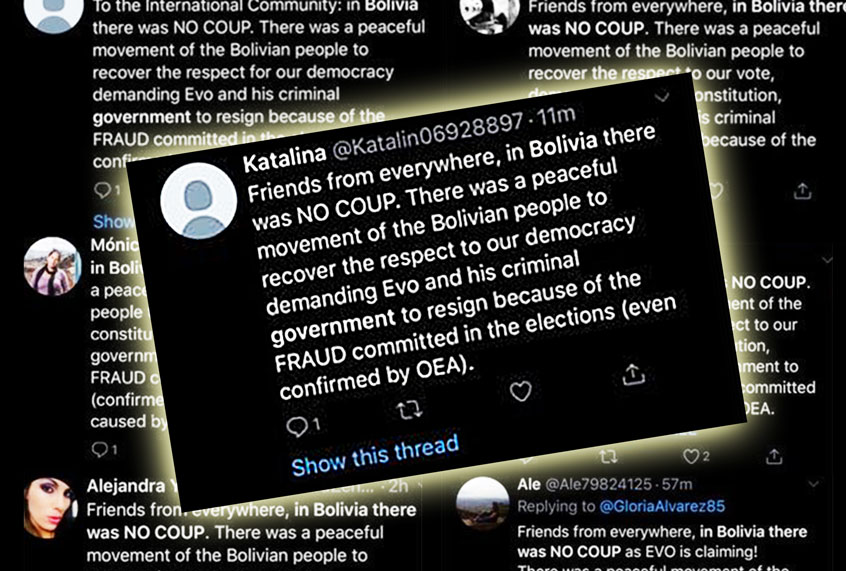 A US Army veteran from Bolivia created an application that shared as many as 69 tweets per second to help spread disinformation in support of a right-wing coup that ousted the country’s former socialist President Evo Morales.

Morales resigned in November after protesters, reacting to dubious claims of election fraud that were amplified by the US-based Organization of American States (OAS), set fire to homes of Morales’ party members. President Donald Trump praised the resignation as a “significant moment for democracy,” while Morales and many independent analysts described his ouster as the result of a US-backed coup d’etat.

The coup took place after Bolivian opposition leaders were recorded discussing “a plan for social unrest, before and after the general elections, with the aim of preventing President Evo Morales from remaining,” according to audio clips published by the Bolivian outlet Erbol. One member of the opposition discussed being in contact with US Senators Ted Cruz, R-Texas., Marco Rubio, R-Fla., and Bob Menendez, D-N.J.

Jeanine Añez, the second vice president of the Bolivian Senate, declared herself the interim president after Morales was forced out, leading to violent clashes between protesters and security forces in which dozens of people were killed.

As news of the coup spread around the world, thousands of brand new Twitter accounts popped up, purportedly created by Bolivians, to reassure the Anglophone world that there was “no coup.” Though some of the accounts may have been real, researchers quickly discovered that many of these accounts were fake. Thousands of accounts posted identical messages reading, in English, “Friends from everywhere, in Bolivia there was no coup.”

The Inter-American Commission on Human Rights reported last month that thousands of fake Twitter accounts were set up in the days surrounding Morales’ resignation.

“The data would show about 68 thousand accounts created, which shared 14 hashtags that would have been shared by 252,090 different accounts, which made 1,048,575 tweets from November 9 to 17,” the agency said, according to a translation of the report.

The hashtags were all either anti-Morales or in support of support of Luis Fernando Camacho, the right-wing president of the Civic Committee of Santa Cruz, and Añez’s interim government.

“Dirty war operations to manipulate public opinion through the internet are frequent” in Latin American, the Spanish outlet El Diario notes. “In the case of the coup against Morales in Bolivia, there are sufficient indications to indicate the existence of a coordinated maneuver in social networks to influence the international conversation and impose the narrative that there has been no such coup and that Morales has had to leave the country for electoral fraud and for being linked to drug trafficking.”

Julián Macías Tovar, a social media coordinator for the Spanish left-wing party Podemos, analyzed the data from the hashtags and found that thousands of accounts were created in the days before the election and spiked after Bolivian military leaders called on Morales to resign. According to his data, 48,000 accounts were created in a matter of just four days to amplify the hashtags.

Tovar also discovered that a single account contributed more than 13,000 retweets to the hashtags. The account belonged to US Army veteran Luis Suarez, who automated his account to retweet posts with the hashtags using a custom app.

Data scientist Rubén Rodríguez Casañ similarly found that Suarez’s account was able to retweet as many as 69 posts in a single second.

Suarez published a photo of his Bolivian ID in an apparent attempt to prove he is “Bolivian and real.”

Suarez also shared a video of Tovar’s analysis on Facebook and joked that “now it turns out I’m cyber Rambo.”

Suarez bragged about his Twitter operation in Facebook posts following the coup, mocking the “concern of the media that a single citizen can reach thousands of people without any effort” and laughing that he could produce more tweets with a single click “than all the effort of the left.”

According to Suarez’s LinkedIn profile, he earned a bachelor’s degree in civil engineering from the Catholic University of Bolivia and later enrolled in the U.S. Army, where he said served at Fort Hood from October 2010 until October 2016. He currently lists himself as a self-employed Full Stack Developer and an Application Developer for RoadVantage, a Texas-based automotive company. All of his accounts are linked to his personal website. RoadVantage did not respond to multiple requests for comment.

A US Army spokesperson declined to discuss Suarez’s online activities on the record but confirmed that Suarez served in the Army as a mechanic from October 2010 to October 2016 and that he was deployed to Afghanistan from September 2013 to June 2014.

Suarez also shared an interview on his vehemently pro-Trump Facebook page that he gave to El Diario via Facebook messenger.

Reporter Carlos Del Castillo asked Suarez about how he configured his Twitter account to automatically retweet the 14 hashtags. Suarez immediately insisted that “in Bolivia there was no coup.”

He repeated the electoral fraud claims that have been widely disputed and bragged that he set up his account to retweet posts countering what he described as “narco Socialist propaganda,” a claim that itself was born out of the misinformation campaign, according to El Diario.

“The Evo Morales government paid and pays personnel to spread propaganda on social networks,” Suarez claimed, according to a translation of the interview. “What I do is counter these cyber warriors but I do it for free and automatically. What I do is not create tweets, is to search for tweets and share them so that the world knows.”

Suarez’s claim about pro-Morales propaganda was disputed by Argentine researcher Rodrigo Quiroga, a member of the National Council of Scientific and Technical Research.

“I found almost no new [propaganda] account[s] created in November that supports Evo,” he wrote.

But Suarez insisted that he was not “manipulating any information,” arguing that the “leftist media” were the ones manipulating information by calling the ouster a coup d’etat.

Suarez told Del Castillo that he created his “own tool” which he learned how to build through his education. Suarez denied that he still had any relationship with the US Army, writing that he is a “veteran of 6 years.”

Suarez told the Bolivian outlet Correo Del Sur that he left the Army in 2016. Now, he says, “I make websites, telephone applications, computer systems, databases. Virtually everything that is related to software.”

Suarez told the outlet that he created a tool that does not run afoul of Twitter policies to “compete” with what he claimed were paid leftists. Suarez claimed that the tool was not a bot but an algorithm that spread real people’s opinion, despite researcher findings that the thousands of accounts participating in the hashtags were fake.

“I found 30 thousand posts from these people and had shared them,” he claimed, arguing that Tovar misrepresented his tool.

“The algorithm is 25 lines of code, they are not the great science: any programming student could have done it,” he said, according to a translation of the interview. “No Twitter rule was broken at any time… my account has never been suspended.”

“Maybe, yes, my algorithm did raise that hashtag and put it in sight of people, that is no crime!” he added. “There are many conspiracy theories, many people said that I was part of the US Army Cyber Command: I was never part of that command, I don’t think I have the skills required to get there.”

Despite admitting to creating an “algorithm,” Suarez insisted that he did not use a “bot.”

“I didn’t use any bot, I didn’t use any artificial intelligence system that will create content. That’s what a bot does. What I used was an algorithm in my account to share the things that I think are important to share efficiently,” he said.

A Twitter spokesperson declined to discuss Suarez’s activity on the record. According to Twitter, users may “not use Twitter’s services in a manner intended to artificially amplify or suppress information or engage in behavior that manipulates or disrupts people’s experience.” According to the social network, Twitter challenges “millions” of “potentially spammy” accounts each month, though Suarez’s account remains active at the time of this writing.

Since the coup, Bolivia’s interim government has moved away from Morales’ secular rule and focus on Indigenous rights, according to The New York Times. Añez has shown a “religious zeal” while filling her cabinet with members of mixed or European descent.

The administration has cracked down on political opposition and civil rights. Añez’s interim government announced an effort to arrest members of Morales’ party and threatened to arrest journalists. Students have been arrested for making memes criticizing the government.

Añez also “issued a presidential decree exempting the military from criminal prosecution when maintaining public order,” according to The Times. One day later, Bolivian security forces opened fire on Indigenous protesters, killing 8 people and wounding dozens of others.

Rudy Giuliani’s business dealings scrutinized by the US attorney’s office he once led: reports