The power sector was privatized in 2013, but some 80 million Nigerians remain without access to power, and elsewhere the grid is plagued by frequent blackouts, leaving businesses and consumers reliant on power generators.

The NEC passed a resolution at Thursday’s meeting that the privitization of the sector needed to be re-examined.

“Solutions must be found; those solutions are not going to be nice,” he said.

Plans to build privately financed power stations have been railroaded in recent years by concerns about persistent shortfalls in payments for electricity across the sector. (reut.rs/2NRpO0U)

Currently, the government-owned Nigerian Bulk Electricity Trading company (NBET) buys power from generators and passes it on to distributors who then collect money from customers and reimburse NBET.

But because NBET is not paid in full for the power it buys, private power generators have been partly reimbursed from an emergency central bank loan fund created to keep the sector afloat.

El-Rufai said the government had supported the sector with 1.7 trillion naira ($5.56 billion) over the past three years.

He said the NEC was listening to all stakeholders and called on Nigerians to withhold judgement until the NEC issued its final report. ($1 = 305.9500 naira) 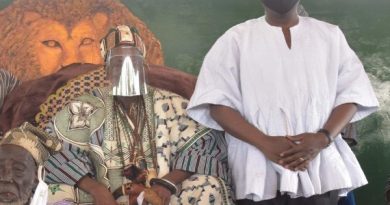 We are ready to eradicate insurgents, bandits, vigilantes tell FG

What if the Court gets sufficient evidence to annul Obaseki's Elections as a result of the discrepancy in his certificate?
Scared.
Really Scared. ... See MoreSee Less

What of if EFCC arrest POI with sufficient evidence?

That's a grave fear for Obaseki. The discrepancies seems too much and too obvious

u are a dreamer ,

Edo will not have governor if that happen please.

Court isnt going to annul anything.

My brothers election is gone you people should face ur businesses and leave the governor alone! so are you guys telling me now that you all are jobless?

This poster has no sence of responsibility

I saw several people testifying for making so much with the help of john greham and I decided to gave it a try and now I'm so happy Mr john greham started managing helped me earn $5000, in 28hours I'm so greatful to john greham contact him on telegram don't miss this opportunity that will change your life in if you don't have the app telegram kindly go and download it and create it to join through the link below👇 You can also contact John Greham on WhatsApp👇 👉👉+121(3-93)5-2068👈👇 👇 👇👇👇👇👇 t.me/joinchat/AAAAAEbudMtPNWIJTwmasw

Let's wait till then

In 1947, a federal system of government was established under a new Nigerian constitution introduced by the United Kingdom, after the indirect-rule system that was first adopted through the traditional native rulers administered by colonial authorities. This new system was based on three Regions – Eastern, Western and Northern. Ishan/Esan Divisional Council was created under the Benin Province in the old Western Region. Due to this new system, in 1944 Herbert Macaulay formed the National Council for Nigeria and the Cameroons (NCNC), which attracted many educated elite like Chief Anthony Enahoro, TJ Akagbosu, Chief Gaius Obaseki, J. Oiboh Odigie, Arthur Prest, O.N. Rewane, Begho and Edukugho of the Benin and the Warri Provinces.
Between 1950/1951, Chief Anthony Enahoro from Uromi and J. Oiboh Odigie from Ewohimi were elected into the Western Region House of Assembly as legislators representing Ishan Divisional Council under the (NCNC) political party. While they were at the Western house of Assembly, they were both approached by Chief Obafemi Awolowo to cross over to Action Group (AG). Chief Anthony Enahoro accepted, but J. Oiboh Odigie refused and stayed back in (NCNC).
Two reasons or events that influenced Enahoro decision to abandon NCNC to cross over to AG and worked with Chief Obafemi Awolowo:
1. Chief Enahoro saw a way out for his native Esan people, who sent him there. He saw a way to help free his people from guinea worm infection, that was ravaging the entire Esanland and also an opportunity to develop Esanland.
2. Chief Enahoro also became disillusioned with Nnamdi Azikiwe, who took over the leadership of NCNC and the NCNC allegedly for Ibo Leaning after the death of Herbert Macaulay.
At this time, Chief Anthony Enahoro was not thinking about the political risk to his political career. He just wanted a way to influence development to his people. Enahoro went ahead and convinced some of his few friends from the Benin and the Warri Provinces to move over with him to Action Group.
Therefore, when the Western House of Assembly opened up in January 1952, 21 out of 24 Midwesterners were allied with NCNC while three: Chief Anthony Enahoro, S. O Ighodaro and Arthur Prest were now allied with the Action Group.
Action Group got the majority in the Western House of Assembly and Chief Awolowo Became the Premier of the then Western Region. Chief Awolowo made Chief Enahoro Minister for Home Affairs, Transport, information and Midwest Affairs.
During Chief Enahoro time as a member of the Western Region House of Assembly and Minister, he was able to conceived, sold and mid-wife the idea of an educational television to the government and he ensured that the party manifestoes of Action Group were faithfully implemented in Esanland. He built hospitals, eradicated guinea worm in Esanland, brought water, built post-offices and telecommunications to Esanland, built schools and ensured free education for his native Esan people. In 1953, Chief Enahoro became the first person to move the motion for Independence.
So now let us go back to the question of the day, what happened to J. Oiboh Odigie from Ewohimi. Who first went with Enahoro to Western House of Assembly? How come, he is never talked about in Esan politics like Enahoro today?
Answer:
After his first term at the Western Region House of Assembly, J. Oiboh Odigie came back home to ask for vote to go back and the Esan people refused to vote for him again, because during his first term at the Western House of Assembly, he was not able to attract any project to Esanland. That ended his political career for life. Today, in Ishan/Esan political history there is no mention of J. Oiboh Odigie name. Only through oral discussions among folks who are preview to this information like me. I am writing this story to help shape the political discourse in Esanland and to remind the upcoming politicians and the current politicians that, we are watching and also to help document J. Oiboh Odigie from Ewohimi information as one of the pioneer politicians from Esanland.

My prince hmm what a history, information is knowledge and knowledge is power. Thanks for giving us this power. I hope our up coming politicians in esan land will learn from this and be able to help their people and be selfless in their services like chief Anthony Enahoro. Thanks my bto🙏🙏

The Ghana Anti-Corruption Coalition (GACC) and the Ghana Integrity Initiative (GII), Wednesday, launched the Citizen’s Manifesto (CACM); as part of

Fuel/Electricity hike: Nationwide strike not yet an option — Labour

Perpetrators of violence against children in Nigeria are parents, teachers,caregivers – UNICEF