The Federal Government is working on 524 roads to link the country as well as intensifying efforts on road to connect the country with the rest of Africa. These projects are believed to hold the key to reversing the situation where the poor state of the road network is resulting in loss of billions of Naira in economic value and avoidable deaths, writes ROBERT EGBE

The 2017 World Bank Report was unflattering: only about 15 per cent of federal roads in Nigeria were in good condition.  Nigerians are unanimous in seeking an overhaul of the country’s infrastructure.

Minister of Works and Housing Babatunde Fashola is driving the presidential mandate of infrastructure renewal. No less than 524 road and bridge projects are ongoing nationwide. Fashola, in a presentation, named 80 of the projects on priority list to include the 27 financed with Sovereign SUKUK Fund, the 47 scheduled for substantial completion in 2020/2021, two roads leading to the ports and four major bridges.

The reason for the prioritisation of these projects, he explained, was to improve the ease of doing business in the country. He said the projects on completion would reduce travel time, lower vehicle operating costs and improve the comfort of road users. These federal roads and bridges are major arterial routes that connect all states in Nigeria, including the Federal Capital Territory. They also link cities with high economic activities and carry majority of heavy goods vehicles, which gradually disperse through the link routes to different parts of the country.

Others include dualisation of Ibadan-Ilorin Section ii in Oyo State, reconstruction of the outstanding Sections of Benin-Ofosu-Ore-Ajebandele-Shagamu Expressway Phase iii, pavement strengthening and asphalt overlay of Ajebandele- Ijebu Ode-Shagamu Road in Ogun State. 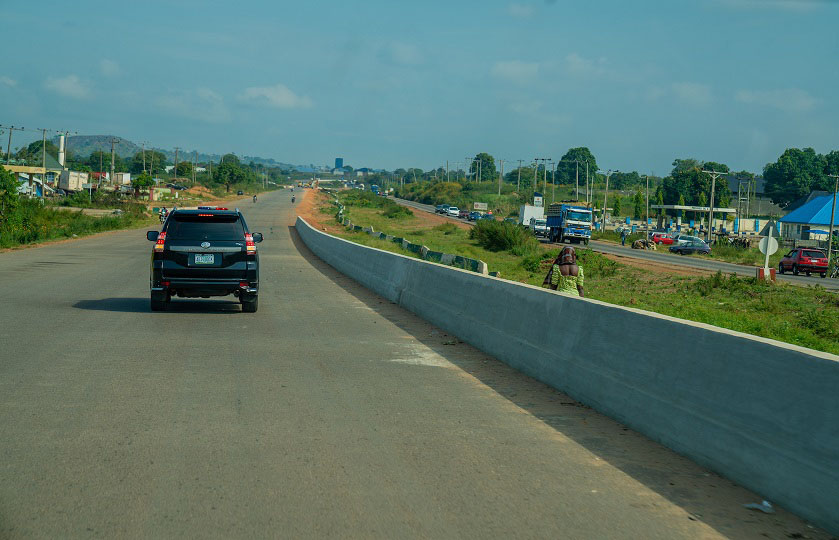 To complete the prioritised projects, an additional N255.6 billion is needed to close the funding gap for the projects. The amount, said the minister, is the difference between the appropriation for the project in the 2020 Budget, which stands N157.05 billion and the actual estimate for the completion of the projects which stands at N412.64 billion.

Fashola is driving the effort to link the country with other parts of the continent. He laid bare the details at the 70th session of the Trans Saharan Route Liaison Committee on Monday, November 11, 2019. Representatives of member countries-Nigeria, Mali, Chad, Algeria, Niger Republic and Tunisia-converged on the Federal Capital Territory of Nigeria to review the progress made on the construction of the 1,131 kilometres of roads which constitute the Nigerian portion of the 9,895 kilometres of roads that make up the Trans Saharan Route. Nigeria comes fourth by the number of roads hosted by each of the six member countries along the route

While Algeria hosts the longest stretch of that Route with 3,320 kilometres of roads, Mali comes second with 2,180 kilometres, while Niger Republic and Nigeria take the third and fourth places with 1,985 km and 1,131 kilometres respectively. Tunisia and Chad host the least with 699 km in Tunisia and 570 km in Chad. These roads make up a total of nine highways across the six countries with Nigeria hosting three of the highways. The first is the Lagos-Dakar Highway which leads from Lagos to Seme Border all the way to Dakar Senegal. The Second is the Lagos-Mombasa Highway which links Nigeria through Yaoundé in Cameroun all the way to Tunisia while the third is the Lagos Algiers Highway.

The minister, who hosted the meeting on behalf of the Federal Government, restated Nigeria’s commitment to the completion of the Route, especially the portion that falls within the territory of Nigeria. That commitment is being demonstrated in several ways including the efforts and steady progress being made towards the completion of the 1131 kilometres of the road that passes through Nigeria, the placing of the major arterial roads – the Lagos-Ibadan Expressway and the Abuja-Kano Road- under the Presidential Infrastructure Development Fund thereby freeing them from any funding challenges and the recent approval by the Federal Executive Council for the ratification and domestication of the African Road Safety Charter. The Minister also cited the recent signing, by the President, of the African Continental Free Trade Zone, an endorsement which, according to him, shows “that we are on the right track”.

The historic significance of the Trans Saharan Trade Route, as an important part of Nigeria’s history, the Minister said, lay in its rich history as the ancient Trans Sahara Trade Route through which important African Personages, like Mansa Musa and Shehu of Bornu, travelled on camels and horses across the Continent. The Minister emphasized this point with delight, “This is how much Africa has progressed. With the partnership of all of the men sitting here and all of the experts, the road that used to be travelled by camels and horses, footpaths, is now motorable”.

He urged Nigerians to understand that as part of this Route, which traverses 37 regions in Africa, connecting 74 urban centres and 60 million people across six member countries, Nigeria “is part of a large urban network of opportunities”. Noting that 80 percent of the present roads has already been asphalted, the Minister wondered why member countries are not utilizing the advantage of the route to connect in trade and commerce as those ancient African Personages did.

President Muhammadu Buhari, who was represented by the Minister of Police Affairs, said Nigeria was committed to the establishment of quality infrastructure in the country to drive economic development and job creation. His administration, he said, was resolved to increase the nation’s stock of road infrastructure in order to ease the cost and time of doing business and to improve her economic competitiveness envisaged in the Federal Government’s Economic Recovery and Growth Plan (ERGP). The President said it was in view of this that his administration shares the aspiration and the vision of the Trans Saharan Route Liaison Committee encouraging member countries to develop sections of Trans Saharan Route within their respective territories. One of the highlights of that event was the inspection of the progress of work on portions of the Route within the Federal Capital Territory by members of the Committee.

Spoken Word: The Change We Need In Nigeria By Hannatu Musawa

You can recalled sometime ago I posted the bad spots (road) in #uromi, that if is not done we block the road..

I want to announce to you, that 98% of those bad spots has be fixed by Setraco construction company..

In my finding, They said they got a lot of calls regards the bad roads.. By I was not told who made the calls.. Well, whosoever that made the calls, I say thank you and #God bless you..

Thanks for the appreciation....at least nor b only complain we fi do, we still dey appreciate good works.

My broda, God bless you, we can all keep making our little contributions to make our town a better place. More grace bro.

Thanks amillion my good God will bless you guys. This is a very huge achievement.

tk u who so ever

God bless u my ambassador

Is this general hospital road/agba grammar school road? Someone should pls talk to me.

My engineer Sir, God bless u and ur family,no evil is permitted to come near u, please I will still like u to help draw attention to okhenlen-awo-uzea road,covering of gutters will not solve the problem, But the problem is that the gutter is higher than the road itself,so erosion can not climb the gutters, that's is d main reason erosion do heap at d centre of d road instead of d gutters. Obulu obhiaba

True Uromi ambassador, thanks and God bless you

Which road is this bro ?

OBASEKI is not only Governing the State the way it ought to be, he is also paying a huge Sacrifice for our future and that of our generations yet unborn unborn. This is why we say GODWIN OBASEKI remains the ANSWER and we must come out in Unity to actualize this dream together.

They call it miracle money

If I send you 1m now out of the abundance God has blessed me with, are you a thief?

If you don't have something good to say, just shut up your mouth

Dear brothers and sisters there is no Free money anywhere, even the ones giving to you by the politicians is not free. As a bank staff any alert received without your consent is someone mistake. Please return any money that is not yours and leave holy life. Thanks and be blessed

Where Is Babachir Lawal, Is He Still On Trial? By Fredrick Nwabufo