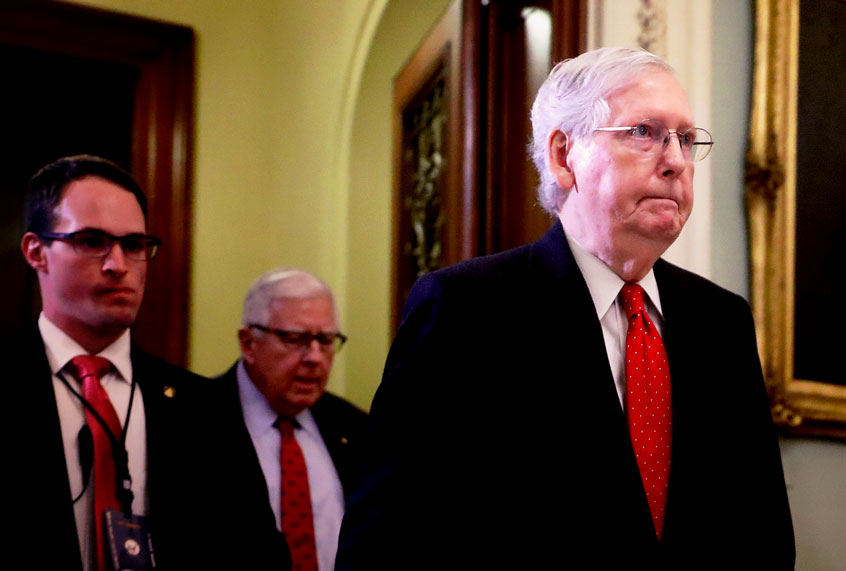 In liberal, politically plugged-in circles, it is an article of faith that if only Democrats did something different, they would do better at winning political battles. Dinner parties, social media, online chats, listservs, coffee hour: All are consumed routinely by discussion of what tweak to Democratic messaging would unlock all the political victories that we know belong to us. Progressivism vs. centrism? Are “identity politics” good or bad? Should Democrats embrace more forceful language, or maintain a genteel tone? Play hardball, or deliver placating language about “bipartisanship”?

This obsessive belief in the magic key Democrats could turn that will solve our current political nightmare is fueling the rising hot tempers around the presidential primary. We believe, in our souls, that the right candidate and right message will win this thing — and that the wrong candidate and wrong message will be a disaster. We need to get these arguments exactly right, we tell ourselves, since that’s what will save us.

Yet, as I watched the impeachment trial Wednesday, which featured the first day of Democratic House members arguing before the Senate in favor of removing Donald Trump from office, I was struck by the fact that Democrats were making a flawless case. Their evidence is overwhelming. Their arguments are airtight. The rhetoric was pitch-perfect. It was a tour de force of Enlightenment faith in the power of rhetoric and reason. Rep. Adam Schiff kept morphing, before my eyes, into Atticus Finch, as portrayed by Gregory Peck.

But let’s not forget how “To Kill a Mockingbird” ends: Atticus loses his case and his innocent client, Tom, is killed. No matter how perfectly Democrats argue their case, Republicans plan to acquit Trump and their voters will be ecstatic about it.

Our problem isn’t the Democrats and their “messaging.” Our problem is the Republicans. Justice has no place in a society run by people who care only about domination and the will to power.

What used to be called the “authoritarian tendencies” of conservatives have grown unchecked, and the parasite has now completely taken over the host body. American conservatism is an authoritarian movement. The American right has become enthralled with the same idea that has motivated fascists for decades, which is that justice, reason and reality itself do not matter — all that matters is raw power.

“What the Senate cameras recorded was a day-long showdown between reason and brute force,” lamented Tom Scocca at Slate Wednesday afternoon.

“Fascism can’t be defeated by mockery any more than it can be defeated by debate, because in its essence it is the antithesis of these things,” Abigail Nussbaum wrote in a powerful essay at her blog recently.

To the fascist, she added, it doesn’t really matter if people point out that your rhetoric is lies and your leaders are ridiculous. After all, “how clever are they going to look when you string them up in the town square?”

This mentality is on full display with Republicans during this impeachment trial. Faced with hours of immaculately presented, unassailable proof of Trump’s guilt, Republican senators, to the last one, are responding with the rhetorical equivalent of fart noises and “I know you are, but what am I?” taunts.

Sen. Roy Blunt of Missouri complained to reporters about hearing “the same story over and and over again” and being forced to watch “the same exact video to make apparently another point.”

Republican senators whiled away the hours by pretending to be outraged that Rep. Jerry Nadler, D-N.Y., correctly accused them of a cover-up. Sen. Ron Johnson of Wisconsin exclaimed that it was “offensive” to make such a charge and Sen. John Cornyn of Texas, a smirk masquerading as a person, called that suggestion “outrageous” and “embarrassing.”

From mockery to feigned outrage, what holds together these Republican responses is an unvarnished contempt for reason and facts and, even more important, outright scorn for anyone foolish enough to cling to those Enlightenment notions of rational discourse.

But cling we do. We tell ourselves we see clearly the situation at hand, and we know full well that Republicans have crossed the point of no return. But we keep plugging away with our reasoned debate and logical arguments, unable to see any viable alternatives.

This inability to look reality directly in the face is most evident on the Democratic campaign trail, which routinely features reporters asking the various contenders how they plan to pass their agenda — whether it’s centered on more modest reforms or sweeping, ambitious goals — in the face of Republican opposition.

Oh, every candidate has an answer, ranging from Sen. Bernie Sanders arguing that his “political revolution” will awaken Americans and put them on the right path to former Vice President Joe Biden arguing that he can create bipartisan comity in the name of getting things done to Sen. Elizabeth Warren saying that passing an anti-corruption package will smooth the way for other reforms.

All these answers are different flavors of bullshit. The reality is Republicans have disproportionate power, pretty much baked in. They will leverage that power to stop any and all Democratic agenda items, no matter how minor, because, under the leadership of Trump and Senate boss Mitch McConnell, they have embraced a fascistic “will to power” philosophy. No argument will move them, since their goal is to crush their opponents and achieve total domination, not to engage in governance based on rational debate and discourse.

Still, it’s hard to get too mad at Democratic candidates for saying these things, because the voters they’re trying to convince — liberals, moderates, anyone who isn’t on board with the Republican authoritarian nightmare — are all clutching to this hope that reason matters, that our democratic traditions of argument, evidence and logic can still win the day. Any candidate who fails to play to that hope is going to lose, and they know it.

But watching the impeachment trial unfold, and watching the perfectly-wrought arguments presented by Democrats evaporate into nothing as they hit the unbending wall of Republican opposition, one thing has become inarguably, distressingly clear: The only thing Republicans respond to is power. Even if some have pangs of conscience, and I have to imagine they do, they are stifling any remaining care for our democratic values and wholeheartedly running toward the siren call of authoritarianism. They are lost. They aren’t coming back.

And it’s not just the party leaders or elected politicians, either. The last three years have been dominated by one unassailable number: 42%. That’s the consistent baseline of Donald Trump’s approval, and while it occasionally dips when a small percentage of conservatives are momentarily flustered by his latest act of unforgivable evil, those wafflers always come back around.

Forty-two percent is a terrifying number, because it’s about more than Trump. That number represents the percentage of Americans who have, it appears, wholly rejected reasoned discourse and democratic values. Due to the quirks in our electoral system that give disproportionate power to rural and suburban areas, and due to voter suppression efforts from the GOP, that 42% will likely control the Senate for the foreseeable future and will quite possibly win the presidency again in 2020.

As the side that still believes in facts, we have to grapple with these grim facts. This endless obsessing over how the Democrats could tweak their messaging isn’t rational. Sure, it feels good to keep harping on Democrats, because Democrats actually listen to us and it creates the sensation of effectiveness.

But it’s a lot like a gambler blowing on dice before he rolls them: Baby needs a new pair of shoes! It’s superstitious, an effort to create a feeling of power when you have none. Even if the Democrats figured out how to execute a perfect strategy, which would be impossible even if it wasn’t unknowable, they cannot change that Republicans, backed by that 42%, simply don’t care. Sometimes the lever you have to pull just isn’t the one that’s the easiest to reach.

To be clear, this situation isn’t hopeless. For one thing, the majority of Americans are still on the side of the angels. All of this may be fixable if people rise up in big enough numbers to kick these authoritarian bastards out. But one thing is certain: We’re not getting any closer to the solution by expending our time and energy worrying about the Democrats. They’re not the real problem.

With no end in sight, Trump’s lies just keep making the pandemic worse

Update on the Diamond Princess Cruise Ship in Japan

We Picked Favorites from the JLo Beauty Line