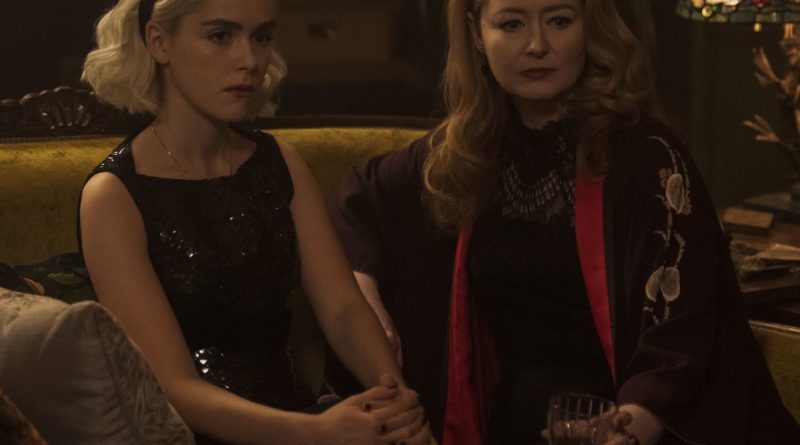 Another witching hour is upon us. The breakout Netflix series Chilling Adventures of Sabrina will return for a third season on January 24, 2020. The much darker and edgier reboot of Sabrina the Teenage Witch premiered in October 2018 and followed the hair-raising story of secret witch Sabrina Spellman (Kiernan Shipka). Below, everything we know about part three of the series, including a breakdown of the first two trailers.

When will Part 3 be released?

On December 7, Netflix confirmed that a third season would be released on January 24, 2020. A video announcing the drop date included an ominous voiceover of the phrase, “Welcome to Hell,” a rallying cry for the macabre show.

Is there a trailer?

Those waiting for an official trailer from season 3 have been treated to two. The latest sees Sabrina faced with maintaining both the human and underworld realms, while protecting her coven. A haunting voice starts the trailer: “You know what must be done, Sabrina. Claim the throne. Save precious Greendale. Your boyfriend.”

Our heroine is trapped in a nightmare, one complete with cheerleading, spell chanting, and looming forces from hell. The new season manages to feel darker than previous installments.

Before the trailer, viewers got a new preview of the season with a moody music video. The track “Straight to Hell” plays as Shipka sings, “I’m not afraid to take that chance, ’cause let me tell ya, When it comes to love, I’m going straight to hell.” Ross Lynch’s Harvey plays the guitar while other cast members dance against a backdrop of Satanic imagery.

Scenes from the new season showcased in the video include a glimpse of new character Prince Caliban (Sam Corlett). Clearly, his villainous presence impacts Sabrina. At one point she’s seen hugging Nick (whose body now contains the Dark Lord’s spirit) before awaking from a nightmare.

The new season will follow Sabrina as she recovers from defeating her father Lucifer, although “the Dark Lord remains trapped within the human prison of her beloved boyfriend, Nicholas Scratch (Gavin Leatherwood).” A Part 3 plot description reads:

“Sabrina can’t live with herself, knowing that Nick made the ultimate sacrifice and is suffering, burning in Hell under Madam Satan’s watchful eye. So with an assist from her mortal friends, “The Fright Club” (consisting of Harvey, Rosalind, and Theo), Sabrina makes it her mission to free him from eternal damnation and bring him back into her arms. However, the Dark Lord’s unseating has sent shockwaves through the realms—and, with no one on the throne, Sabrina must assume the title of “Queen” to defend it against a challenger, the handsome Prince of Hell Caliban. Meanwhile, in Greendale, a mysterious carnival rolls into town, bringing with it a threat to the Spellmans and the coven: A tribe of pagans looking to resurrect an ancient evil.”

Kiernan Shipka as Sabrina and Miranda Otto as Aunt Zelda.

Are there new additions to the cast?

Deadline reported that three new cast members would be joining the coven in 2020. Sam Corlett (The Dry), Skye P. Marshall (The Fix), and Jonathan Whitesell (Riverdale) will play recurring roles in the next season, news confirmed with a teaser video on the show’s official Instagram.

Corlett will play Caliban, who is referred to as a “so-called Prince of Hell, sculpted from clay from the City of Pandemonium. He challenges Sabrina for control of the Throne of Hell, even as infernal sparks start to fly between him and the teen witch,” per Deadline.

Marshall will assume the role of Mambo Marie, a voodoo priestess who “helps Prudence and Ambrose track down the villain Blackwood. But Mambo has her own secret agenda and passions, drawing her towards our coven—and Zelda.”

Whitesell will portray Robin, a man with an “elfish” quality. The character is described as “caring and sweet,” who has been known to be a “mischief maker—and perhaps something even more dangerous.” Deadline notes that Robin travels with the carnival that comes to Greendale, and soon develops feelings for Theo.

Does this mean the show is headed to Hell?

In the show’s second season finale, Sabrina seemed committed to going to the Underworld to save her boyfriend Nick from evil. But will she actually venture to the fiery pits?

As for what that means for the love triangle between Sabrina, Nick, and Harvey, Aguirre-Sacasa said, “It’s funny, I love both those guys. I love Gavin and I love Ross. I think probably, I ship both couples. I have a soft spot for Harvey because he’s Sabrina’s longtime boyfriend in the comic books, but I cannot deny that Sabrina and Nick are a great, potent match. So yes, there is reason to hope for Harvey and Sabrina shippers. But Sabrina and Nick are pretty undeniable.”

Kiernan Shipka as Sabrina and Ross Lynch as Harvey.

Yes! Back in October 2018, Netflix announced that two more seasons were on the way after the show’s second season debuted in April 2019. This means that after the next eight episodes premiere on January 24, at least eight more will continue the story into a fourth season. No magic spells required.