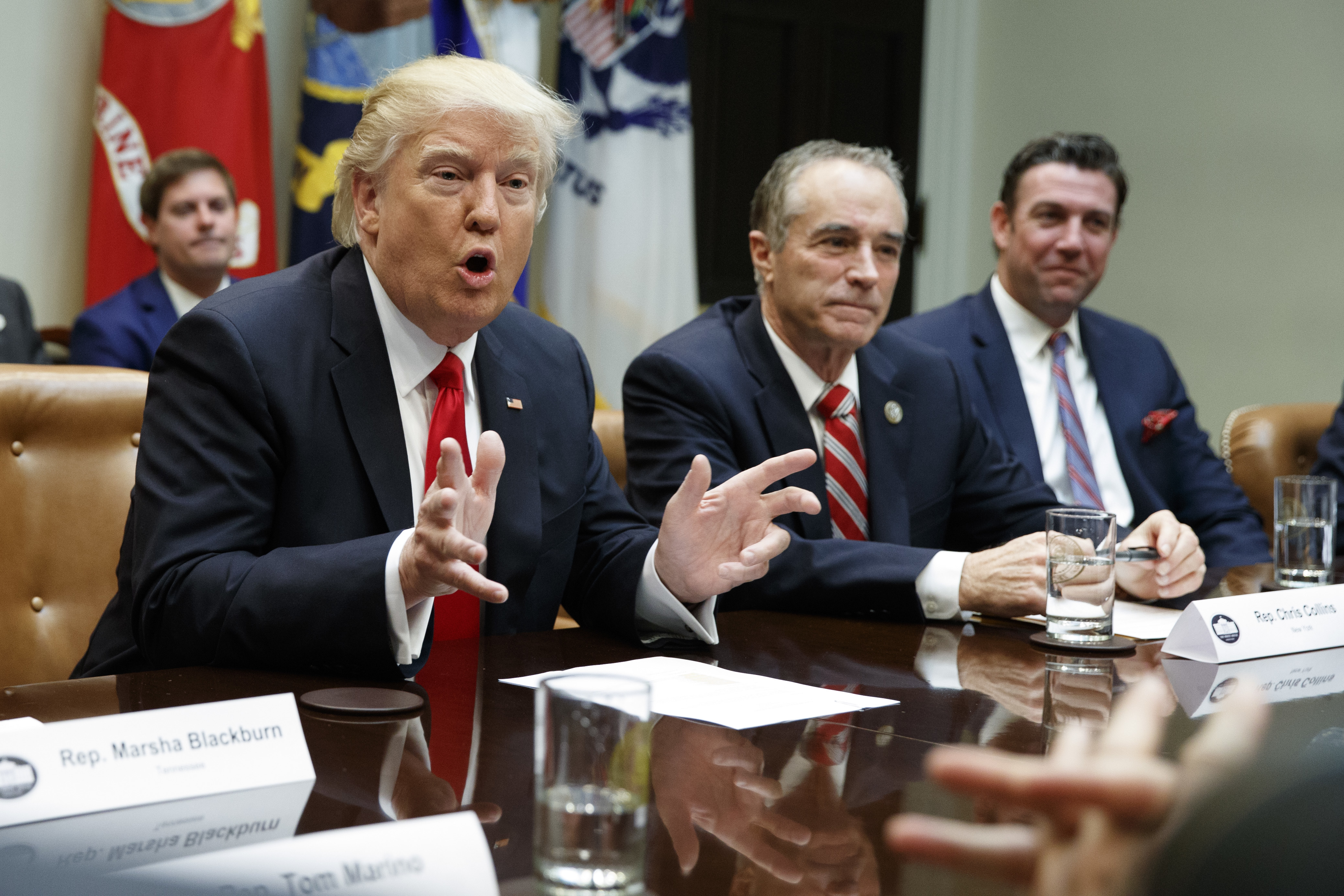 Collins, the first member of Congress to endorse President Donald Trump in his 2016 presidential bid, pleaded guilty to conspiracy to commit securities fraud and making false statements in October. He resigned immediately after changing his plea from not guilty to guilty.

The former representative was accused of using insider information to help his family make illegal trades to avoid more than $768,000 in losses in his investment in a failed Australian media biotech firm. Collins reportedly participated in the scheme while visiting the Trump White House in 2017.

Prosecutors asked a judge to sentence Collins to up to 57 months in prison Monday in a court filing. They recommended the maximum sentence, because Collins continued to serve in Congress while hiding his crimes, according to the filing. The sentence is far higher than the one-year sentence recommended by the U.S. Probation Office, The Buffalo News reported. Collins’ lawyers recommended that he receive no prison time and instead be sentenced to home confinement and community service.

“In committing insider trading and later lying to federal agents to cover it up, and in continuing to actively serve in the House of Representatives during that time period, Collins came to embody the cynical idea that those in power who make the laws are not required to follow them,” prosecutors said in the filing. “This surely was not lost on him, but it did not cause him to hesitate in making the choice to commit multiple crimes while holding one of the most visible and prestigious jobs in the United States.”

Prosecutors said Collins and his son Cameron had “access to non-public information about the company” while serving in Congress and owning a large portion of the firm’s stock. Other family members and friends also bought stock.

The company, Innate Immunotherapeutics, completed a clinical trial that failed and caused its stock to drop 92 percent, prosecutors said. But Collins got inside information about the failed trial while attending the annual congressional picnic at the White House. Collins tried to make several calls to his son from the White House lawn, the filing said, and eventually “tipped Cameron about the failed drug trial.”

Collins later tipped others “with inside information about the failed drug trial,” prosecutors said, and they agreed to space out their sales of the stock. Cameron alone sold more than one million shares of Innate before the company released the failed drug trial results to the public.

Prosecutors said Cameron avoided approximately $571,000 in losses, while others involved in the scheme also avoided tens of thousands in losses.

When questioned by the FBI at his home in April 2018, prosecutors said Collins chose to “lie to them in order to divert law enforcement from the trail of evidence showing that he and Cameron had committed insider trading,” the filing said.

Collins initially claimed to investigators that he never told anyone about the failed trial.

“That was a lie,” prosecutors said. “He amended his account to say that he had told his wife about the trial results, but not Cameron. That was also a lie. Then he invented an additional wrinkle that Cameron had told him that he (Cameron) intended to sell shares in Innate due to concerns about [a] trading halt. Collins compounded this lie, in an attempt to make it more convincing, by claiming that Cameron had told him that sophisticated stock blogs generally say that trading halts indicate negative news. Collins’ evolving statement to the FBI was an effort to cover up the crime that he and other members of his extended family had committed ten months earlier.”

“Almost immediately after lying to the FBI,” prosecutors said, Collins warned others that they may be approached by investigators. “When Cameron was interviewed by the FBI, he provided substantially the same false explanation of his suspicious trading that Collins had offered on his behalf,” the filing added.

Prosecutors responded to a filing from Collins by stating that he was “wrong to assert that ‘society … will gain no benefit’ from incarcerating an extraordinarily sophisticated and powerful businessman and politician who twice made the choice, notwithstanding the absence of any material want, to commit a serious crime.”

Collins “flouted” his responsibilities as a lawmaker and his decision to twice violate the law was “brazen,” the filing said.

Collins served in Congress since 2013. His seat will be filled in a special election on April 28.

“The cynicism of Collins’s conduct — his decision to repeatedly violate federal law while continuing to accept the trust of the public to draft it — is exacerbated by its total gratuitousness. Collins committed a financial crime without having any financial need,” prosecutors added. “The fact that Collins did not personally profit from his insider trading activity is not mitigating. Collins was not able to trade his own shares because they were tied up with a transfer agent. He did the next best thing, which was to tip Cameron. It is not as if Collins resisted the impulse to make money by violating the law. Rather, the only way he could monetize the information he had was by allowing his family to trade on it, and that is precisely what he did.”

Big Bird was my pen pal: Here’s what I learned from Caroll Spinney

Impeachment skeptic David Brock on why he flipped: “A clear story of egregious behavior”

This is to inform the general public that 48 cases of LASSA fever have been reported as at 6am today (Sunday, 26 January 2019), at Irrua Specialist Teaching Hospital (ISTH).

Majority of the cases reported are from Ekpoma and its environs, with all being recent cases in the last 52 hours. The LASSA fever–a hemorrhagic disease, is caused by the LASSA virus and majorly transmitted by rodents (rats).

You are therefore, by this press release, advised to maintain minimum hygienic standards. Wash your hands with soap at all times. Thoroughly cook your food before eating. Avoid drinking garri henceforth, as it's the fastest means through which rats transmit the disease. And please, stop eating giant rats in the guise of "African rabbit". Keep your surroundings/hostels clean. Store your foodstuffs in airtight, rat-proof containers.

And while you ponder on this new incidence of the LASSA virus within Ekpoma and its environs, do not panic, as all hands are on deck to curtail and contain the problem.

To save lives, as prevention is cheaper and better than cure, do share this message across platforms.

Yours in service and to your continued wellness,
Ehizogie E. Iyeomoan,
General Secretary, EPF.

REDALERT: LASSA FEVER HITS EKPOMA AND ENVIRONS This is to inform the general public that 48 cases of LASSA fever have been reported as at 6am today (Sunday, 26 January 2019), at Irrua Specialist Teach...
View on Facebook
·Share

I will never be poor in d name that is above every other name.

I will never be poor in my life ijn

I will never be poor in my life 🙏

I will never be poor in my life.