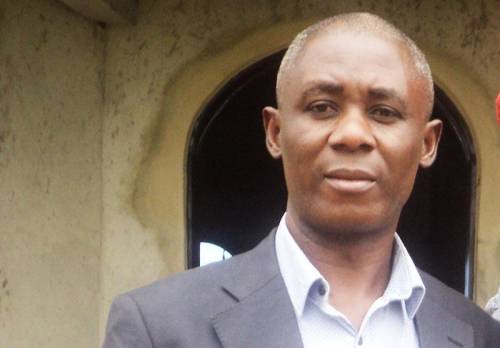 It was Thursday, January 2, 2020, at about 2:30pm, I had met with the Divisional Police Officer in charge of Bori Division and later with the Area Command in Bori. I needed to brief them on the planned Ogoni Day activities and assure them the event will be peaceful as usual.

Thereafter, I left for Port Harcourt. At the police checkpoint at Akpajo, Eleme Local Government Area, we suddenly heard several gunshots. Some indecently dressed police officers came to my car, forced me out. In that terribly confused state, I introduced myself, that earned me heavy punches in my face. Immediately, I was handcuffed.

I was pushed into another car, a Toyota Camry. The same officer then handcuffed me to my back. The handcuffs on my hand was so painful that I pleaded with the officers to relax it a bit. One of them responded thus: “you stubborn trouble maker, we were supposed to shoot you”.

I was in company with two boys from my community, Monday Barigbon and Dumlebabari Doode. Those two were taken in my car. The men now drove us to Port Harcourt. On our way, some five minutes later, calls started pouring into my phone. My captors then realised that the Ogoni people have become aware of my abduction.

They drove down to their office near Choba, Port Harcourt. It was the office of the Inspector-General of Police, Special Tactical Squad where I was detained till the following morning without food. My right hand was handcuffed to the burglar proof of one of the windows until morning and so there was no way I could sleep.

Early Friday morning, at about 8:00am, one of the police officers came to me to come get some food. My two hands were now handcuffed. We both went outside and I was put into the same Toyota Camry, taken to the Special Anti-Robbery Squad, Rukpokwu, Port Harcourt.

There I was striped and left in boxer shorts. I was put into the cell with a large number of detainees.

Later that day (Friday, January 3, 2020), I was taken from Rukpokwu and moved to another detention center in Borokiri, Port Harcourt. At Borokiri, I was put into a dark cell without lights and ventilation. I understand the Borokiri facility had been built for armed robbers. The journey from SARS, Rukpokwu to Borokiri was painful and traumatic. I was taken without clothes and thrown into a very cold air conditioned vehicle. I had only my boxer shorts on me. We arrived Borokiri like condemned criminals with no value.

An interesting conversation ensued with the police officers as we drove to Borokiri. One of them asked if I knew Senator Barry Mpigi, “yes”, I replied. “Do you have issues with him,” he asked. “I don’t have problems with anybody,” I responded. “You must die in detention,” he then told me.

On arrival at the Borokiri IGP Unit, I and the two Ogoni youths detained with me were placed in three different cells and the officers were instructed not to allow anyone gain access to us. I slept on the bare floor and when I needed to urinate, it has to be in a bottle. It was a real torture chamber. I was left there that night on bare floor until the following day when the IPO, Inspector Victor of the IGP Special Tactical Squad and two others arrived. They moved me in handcuffs back to the IGP Tactical Squad office near Choba. This time, I was allowed to wear my cloths before I was taken out. The other two arrested with me were left in Borokiri and brought much later.

On getting to the office of the IGP Special Tactical Squad, I was put in leg-cuffs and locked up in the detention chamber.

When the commander arrived, he ordered the leg-cuffs be removed. He later called me into his office and the handcuffs were also taken off. There he informed me that I will be bailed and my bail bond will be signed by Senator Barry Mpigi. I was later to learn that the instruction was that the person who arrested me should be the one to bail me.

Senator Mpigi did not turn up. He sent one Barr. Gwezia who signed the bail bond along with my friend, Mr Success Kpobari Penu, who was on standby to sign the bail bond should Mpigi fail to show up.

The reason I was held

This narrative will be incomplete without touching on what I was accused of. Shortly after we arrived the IGP office, the IPO called my attention to an order from an Abuja court and signed by a high ranking police officer. I asked for the substantive suit and questioned why a court will give an order without a substantive suit and signed by a police officer. I also noticed that the so-called order did not indicate the parties to the suit nor did it have the seal of a judge or magistrate.

The IPO asked me to only respond to the petition which had been written by Legborsi Pyagbara though not signed by him. I knew this was a gang-up, a frame up by hatters of MOSOP and our struggle to get me incarcerated ahead of the Ogoni Day I was to address on January 4. The petition stated that I invaded the MOSOP Secretariat in Bori on January 7, 2019 and in August 2019, I burnt down Legborsi Pyagbara’s house in Nyokuru, Khana Local Government Area.

I told them I was at the MOSOP Secretariat because I won the MOSOP election held on December 19, 2018 and not that I just woke up to claim the residency of MOSOP.

It was shocking to learn how people whom we look up to as custodians of social values, those who should maintain high standards could become helplessly and miserably ridiculous simply for personal gains. In any case, I responded to the petition ridden with lies.

You may want to read some reports on the burning of Pyagbara”s house in Nyokuru including what Pyagbara said after the incident.

My response to the incidences: https://www.ogoninews.com/ogoni/347-mosop-call-for-probe-into-ogoni-killings-by-armed-bandits

Despite being the petitioner, Pyagbara in his usual hypocrisy denied knowledge and any links to my arrest. See https://punchng.com/release-my-husband-mosop-factional-leaders-wife-demands/

The BBC report above is very revealing. An armed robbery gang had launched the attacks over the detention of their leader.

Well, I told them the allegation were all lies and have since provided evidence to substantiate my representations.

That was it. It was a connivance between Saro-Wiwa’s enemies struggling to diminish his sacrifices and those of thousands of other Ogonis, who paid the supreme sacrifice for Ogoni freedom. Our struggle is just, we are committed to it and cannot be intimidated. It is a simple demand for justice and we are confident justice will come to Ogoni sooner than later.

I thank all of you, my family, individuals, groups the media and all men of goodwill whose efforts secured my release. Ken Saro-Wiwa was also framed up and lost his life in the process. I am grateful that I can still pursue the cause of freedom for the Ogoni people. God bless you all.

Painful to have lost Patrice lumumba when Africa betrayed him to King Leopold of Belgium, rest in peace the great pan africanist