In a letter filed with the Nigerian Stock Exchange, MTN said the government had decided to drop its case and refer the issue to tax and customs authorities “with a view to resolving contentious issues”.

“We are very pleased with the decision of the (attorney general) and we commend him for his wisdom,” MTN Nigeria’s Chief Executive Ferdi Moolman said in a statement.

In a statement, the office of Attorney General Abubakar Malami said the decision “demonstrates unflinching commitment to the rule of law where all statutory agencies will be allowed to independently work with a view to fulfilling their mandates.”

Malami had ruled that the firm owed taxes relating to the import of equipment and payments to foreign suppliers from 2007 to 2017.

The Johannesburg-listed shares of MTN Group rose more than 5% after the announcement. Nigeria is its biggest market, with roughly 60 million users.

The company, whose local unit listed on the Nigerian Stock Exchange last year, said at the time that it would sell more shares to the public and increase local ownership once the tax row was resolved.

MTN has a contentious history with Nigerian authorities.

In 2015, the communications regulator handed MTN a $5.2 billion fine reut.rs/36IFw61 for failing to disconnect unregistered SIM cards. MTN eventually reached a deal in which the fine was cut to $1 billion.

In August 2018, MTN’s shares fell by more than 20% after the central bank demanded the company repatriate $8.1 billion reut.rs/2FCANHd that it said the company had illegally sent abroad. MTN agreed to pay $53 million bit.ly/30an584 to settle the case.

Investment funds, banks and analysts have said the latest tax case, as well as the previous disputes, have made foreign investors reluctant to commit to long-term investments in the country. 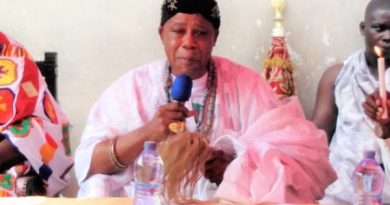 Buhari condemns killing of 47 persons by bandits in Katsina

Ghana looks up to you — ATAG tells Bagbin