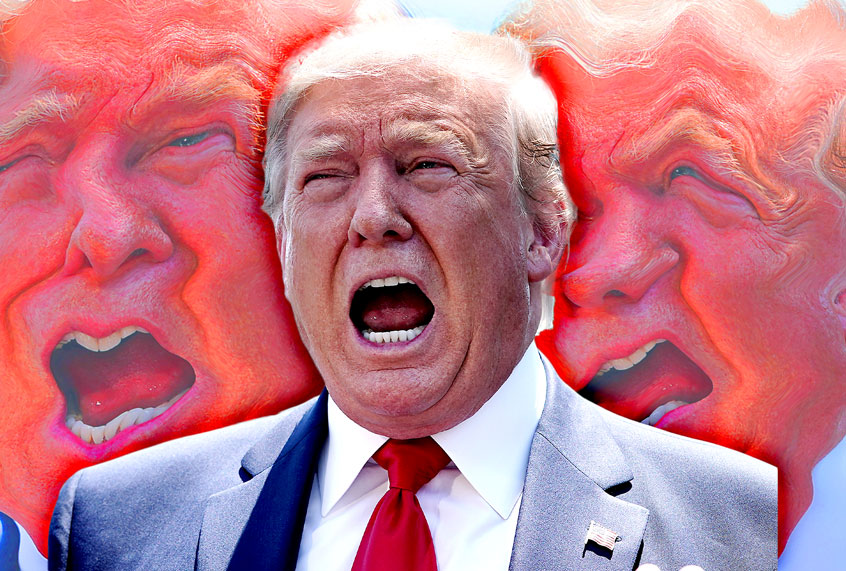 Donald Trump can still rely on a remarkable amount of credulousness from top news organizations, particularly in their headlines and initial tweets.

Trump on Thursday morning ad-libbed that he ordered the assassination of Iranian General Qassem Soleimani “because they were looking to blow up our embassy”. When asked what evidence he had, he simply said it was “obvious.” At a political rally on Thursday night, he went further: “Soleimani was actively planning new attacks and he was looking very seriously at our embassies and not just the embassy in Baghdad.”

He still got the kind of coverage normal presidents get when they say something controversial, rather than the coverage that a compulsively lying president ought to get when he says something that’s obviously made up.

Some of the news coverage described his declaration as a new revelation, some as a contradiction, some as a possible conflation. Much of the coverage at some point noted that it lacked supporting evidence. But none that I saw called it out for what it really was: Yet another bit of disinformation intended to excuse one of the most impulsive, illegal, dangerous and consequential acts Trump has taken yet.

Here’s what the headlines could have said: “Trump makes new, baseless claim to justify shocking, inflammatory assassination of Iranian general.”

Instead, the initial tweets were little blasts of raw propaganda:

From a CNN national security analyst:

On the “CBS Evening News,” Nancy Cordes said Trump had “offered a new rationale” for the killing — then offered qualified support for it, reporting, “A senior defense official said the U.S. government was concerned about a plot against the U.S. embassy in Baghdad — but that’s not what top officials told lawmakers yesterday.”

At Bloomberg News, under the headline “Trump Says Soleimani Killed After Iran Plot to ‘Blow Up’ Embassy,” Josh Wingrove indicated that Trump was maybe conflating things.

The president’s justifications for killing Soleimani have shifted. He has said the Iranian general was planning unspecified “imminent” attacks against U.S. forces. He has also blamed Soleimani’s history of helping to foment unrest in the Middle East and provide weapons to Iraqi militia that were used to kill American troops in the Iraq War.

He has not previously accused the Iranians of seeking to destroy the Baghdad embassy. Asked subsequently to explain what he meant, he indicated that he was referring to the protests, during which fires were set on the embassy grounds.

In the New York Times, under the guileless headline “Trump Claims Iranians Were Plotting to Blow Up American Embassy,” Michael Crowley and Eileen Sullivan injected some skepticism right away:

President Trump asserted without evidence on Thursday that a top Iranian commander killed in an American airstrike was plotting to blow up an American embassy.

“We did it because they were looking to blow up our embassy,” Mr. Trump said in remarks to reporters during an unrelated event at the White House.

But their speculation about what Trump really meant was way too charitable:

It was unclear whether Mr. Trump might have been disclosing new details about what the administration has called an “imminent” Iranian plot against American interests in the region, or whether he was referring to the pro-Iranian protesters who stormed the American Embassy in Baghdad last week, a subject he returned to later in his remarks.

CNN was all over the place

After a day of deescalation, President Trump is back to saber rattling and hyping the case for taking out Iranian General Qassem Soleimani. The President claimed that the Iranians were preparing to blow up the U.S. embassy in Baghdad, but administration officials are doing some cleanup saying the President was not talking about a new plot to attack the embassy.

Jake Tapper’s interpretation was that “the president clarified he was talking about when the Iranian-backed militia was storming the embassy.”

But at CNN’s website, under the headline “Trump claims Soleimani plotted to blow up US embassies,” Ryan Browne and Paul LeBlanc gave undue credence to a sole “senior defense official” who supported Trump’s version of events:

A senior defense official backed up the statements later on Thursday, telling reporters the US had intelligence about multiple plots and threats involving Soleimani, including one that involved a plan to attack the embassy using explosives.

The plot was separate and more sophisticated than the attempts to storm the US embassy in Baghdad by Molotov-cocktail wielding Khatib Hezbollah members and its supporters, an effort US officials have said was also orchestrated by Soleimani.

The official added that the US government was concerned about the threats posed by Iranian-linked groups to multiple US embassies in the period leading up to the strike on Soleimani, including the US embassy in Beirut, Lebanon.

But the senior defense official would not provide any additional details on the plot against the embassy citing the sensitivity of the intelligence.

Dribbles of skepticism appear at NBC and Politico

If you were watching carefully, you could actually see a modicum of skepticism leaking into some of the reporting in real time.

One the “NBC Nightly News,” one version of Kasie Hunt’s report, presumably the earlier one,  had her saying: “Meanwhile, the president revealing more about the intelligence behind the strike — but not making the evidence public.”

In what was presumably a later version, Hunt revised that to say, “Meanwhile, the president making unsubstantiated claims about his justification for the strike.”

An earlier version of the story included this phrase: “The detail would be one of the most concrete revelations about the attack …”

In the later version, there was a new phrase in its place: “Trump was still vague about the threat …”

Fox News (on the web) for the win!

The best headline and coverage I saw was, from all places, the Fox News website, where in a story headlined “Trump remarks ignite conflicting claims about plot against US embassy,” Morgan Phillips didn’t remotely take Trump’s comment at face value. Her top:

A comment made by President Trump Thursday morning has raised questions about whether there was a new plot against the embassy in Iraq prior to the killing of Iranian Gen. Qassem Soleimani.

She presented a likely explanation:

But later on, Trump mentioned the attack on the U.S. embassy in Baghdad on New Year’s Eve. Multiple White House officials confirmed to Fox News that he was referring to this attack in his “blow up” comments rather than a previously undisclosed threat.”

Then Phillips reminded readers of the previous and still operative, but unspecified, rationale:

White House officials continue to insist, however, that there was an imminent threat posed by Soleimani that led them to take him out at that time, but it was not about blowing up the Baghdad embassy. They decline to specify the actual threat.

Finally, she provided this astonishing exchange from Secretary of State Mike Pompeo’s visit to Laura Ingraham’s Fox News show Thursday night, in which Pompeo notably did not confirm what Trump said:

“It was his forces that penetrated our embassy just a handful of days before that, Kata’ib Hezbollah warriors orchestrated, directed by Qasem Soleimani himself,” Pompeo replied. “I don’t think there’s any doubt that Soleimani had intentions, not only to take action against our forces, our diplomats in Iraq, but in other countries around the region and world as well.”

The Washington Post didn’t pay this supposed revelation much attention. Kareem Fahim and Sarah Dadouch mentioned it in a wider-ranging story, writing that “It was not clear whether [Trump] was referring to previously undisclosed intelligence or to the storming of the U.S. Embassy in Baghdad by supporters of an Iranian-backed Iraqi militia a few days before Soleimani was killed.”

Keep an eye on coverage of Pompeo’s incredibly obvious backsliding on the concept of imminence — also from his appearance on Ingraham’s show.

Celebration or day of mourning? The fascinating true story of the first Thanksgiving