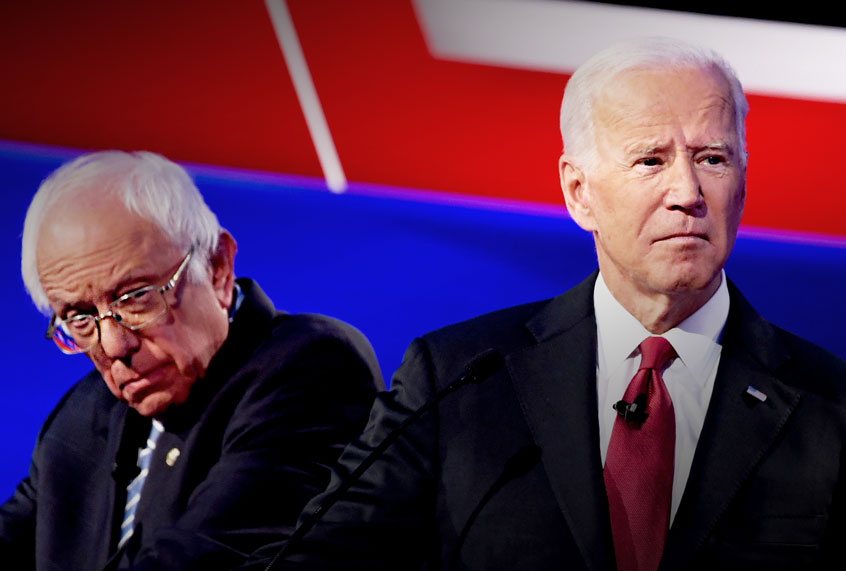 Despite all the polling swings throughout the early stages Democratic campaign, Sen. Bernie Sanders of Vermont appears to have re-established himself as the top threat to former Vice President Joe Biden with the Iowa caucuses just three weeks away.

Sanders surged into a three-way tie for first place with Biden and South Bend, Indiana, Mayor Pete Buttigieg in Iowa, according to a new CBS News/YouGov poll, and has a slight lead in the RealClearPolitics polling average in the first-in-the-nation caucus state. Sanders also sits ahead of Biden and Buttigieg in New Hampshire, according to RCP data. Sanders’ strength in the early states is not entirely a surprise: He won the New Hampshire primary by more than 20 points against former Secretary of State Hillary Clinton in 2016, and lost Iowa by a razor-thin margin of just over 0.3 percent.

The Biden campaign “increasingly views Sanders as his most formidable opponent in Iowa and beyond,” Politico reported on Thursday. Biden has specifically courted the endorsements of Iowa officials who backed Sanders last time around and has attempted to counter huge crowds at Sanders events featuring surrogates like Rep. Alexandria Ocasio-Cortez with events featuring former Secretary of State John Kerry and former Agriculture Secretary (and Iowa governor) Tom Vilsack.

“What is the lesson from 2016? It’s to not underestimate Bernie Sanders and his supporters,” Biden senior adviser Anita Dunn told Politico. “It’s a strong, broad base of support. And he is an indefatigable candidate.”

Though polling in the early states has been light since November, Sanders’ numbers suggest that he has solidified his standing and even gained ground after a heart attack scare late last year.

“Bernie Sanders is enormously underrated in this race,” Peter Leo, the Democratic Party chairman of Carroll County, Iowa, told The Daily Beast. “He’s come back stronger than ever. I’ve even noticed the amount of energy the man has post-surgery.”

As candidates like Sen. Elizabeth Warren of Massachusetts have been trending down, Sanders is trending up.

“For everybody else in the field, it’s a problem if Sanders wins the first two,” Iowa Democratic pollster Jeff Link told The Daily Beast. “He’s going to have a head of steam going into Nevada and South Carolina and Super Tuesday.”

Rebecca Katz, a progressive Democratic strategist, agreed that strong showings in Iowa and New Hampshire by Sanders would bode poorly for Biden.

“If Bernie wins those first two states, I think the establishment will have a collective freakout the likes of which we have never seen before,” she told the outlet. “We’re in for a very long and hard fight with lots of ugly attacks and big money spent.”

There has been no polling in Nevada for months, though November polls showed Biden ahead in the state. But Sanders “has recently gained traction with Hispanic voters,” a key bloc in Nevada, the Daily Beast noted, and leads Biden among Hispanic voters nationally.

“Bernie’s ground game in Nevada is off the hook,” a Democratic strategist told The Daily Beast.

Sanders is also the only candidate in the race whose polling comes close to Biden’s among black voters, the largest Democratic bloc in South Carolina.

Though Biden is the overwhelming favorite to win South Carolina, a recent poll showed Sanders gaining the most ground of any candidate. Some Democrats in the state have praised Sanders.

“If Bernie is the winner of Iowa and New Hampshire and Biden wins Nevada and South Carolina, I think they’re both well-positioned to compete in Super Tuesday,” added South Carolina Democratic strategist Antjuan Seawright. “Bernie’s fundraising haul gives him the ability to compete in multiple places.”

Fundraising will certainly be a big advantage for Sanders, even after he swore off big-dollar fundraisers. Sanders touted that he reached 5 million individual campaign contributions last year while no other candidate has reached 3 million. Sanders raised $96 million last year to Biden’s $60 million. Sanders has also hit out at Biden after the former veep had a change of heart and dropped his opposition to a super PAC devoted to raising funds in support of his campaign.

While Biden has largely avoided attacks from fellow Democrats during the primary campaign so far, Sanders recently went on the offensive in a bid to draw a contrast on his foreign policy views and hit out at Biden’s claim that he is the most electable general election candidate.

Trump’s properties: A playground for white nationalists, Groypers and other far-right loons