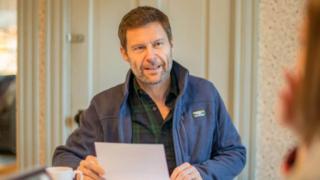 A former Google executive has raised concerns about the tech giant’s human rights policies as it eyes expansion in China and elsewhere.

Ross LaJeunesse, the firm’s former head of global international relations, said he was “sidelined” after he pushed the company to take a stronger stance.

Google defended its record in a statement, saying it has an “unwavering commitment” to human rights.

Mr LaJeunesse is now campaigning for a seat in the US senate.

He said his experience at Google convinced him of the need for tougher tech regulations.

“No longer can massive tech companies like Google be permitted to operate relatively free from government oversight,” he wrote in a post on Medium.

But it has since explored ways to return to the country, a major market, stirring controversy.

In July, the company said it had cancelled its efforts to develop a censored search engine in China. The “Dragonfly” programme had generated concerns about enabling state control among US politicians and some employees, including Mr LaJeunesse.

‘Executives came up with an excuse to say no’

Mr LaJeunesse said Google rebuffed his efforts to formalise a programme for human rights review, even as it worked to expand in countries such as China and Saudi Arabia.

“Each time I recommended a Human Rights Program, senior executives came up with an excuse to say no,” he wrote.

“I then realized that the company had never intended to incorporate human rights principles into its business and product decisions. Just when Google needed to double down on a commitment to human rights, it decided to instead chase bigger profits and an even higher stock price.”

Mr LaJeunesse started at Google in 2008 and worked there until last May. He said he also raised concerns about treatment of women and minorities – only to find himself flagged as a troublesome employee.

For example, he said his boss said at a staff meeting: “Now you Asians come to the microphone too. I know you don’t like to ask questions.”

Mr LaJeunesse said Google has changed as its business expanded into new areas, such as cloud computing, and its original leaders became “disengaged”.

Larry Page and Sergey Brin, who co-founded the business while in graduate school at Stanford University, officially stepped down from top roles at the company last month.

Google said it conducts human rights assessments for its services and designs and uses artificial intelligence in accordance with human rights principles.

“We have an unwavering commitment to supporting human rights organizations and efforts,” a spokeswoman said in a statement.

“We wish Ross all the best with his political ambitions,” she added.

Mr LaJeunesse is now running for the Senate as a Democrat in Maine, for a seat currently held by Republican Susan Collins.

His attack comes as concerns about the practices of Silicon Valley giants grow in the US, with politicians as different as Democrat Elizabeth Warren and President Donald Trump criticising tech giants.

The Environmental Justice Foundation is demanding stronger sanctions for trawlers caught flouting the fishing laws of Ghana. EJF said the