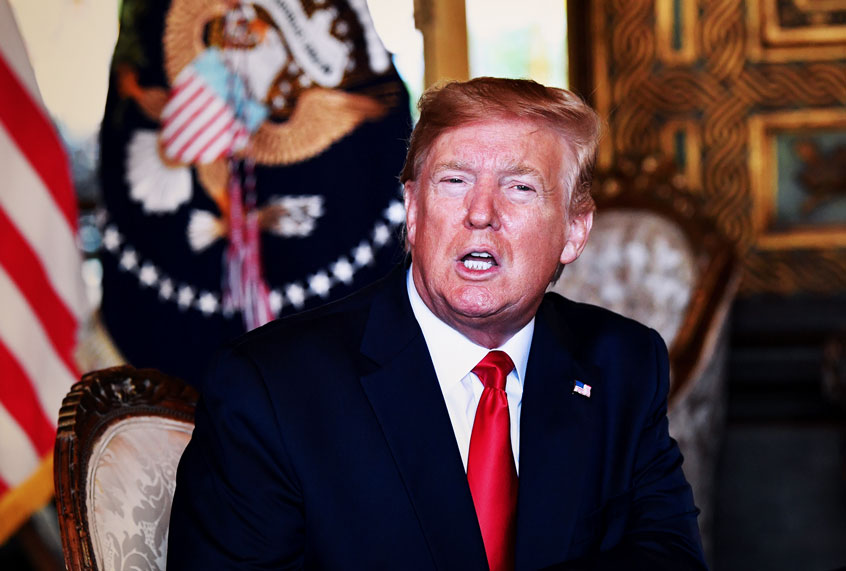 Sick societies normalize the aberrant and abhorrent behavior of their leaders and other elites. This behavior in turn becomes a type of pathology the infects the general public.

Last week, Dr. Bandy Lee, a professor of psychiatry at the Yale University School of Medicine and editor of the bestselling book”The Dangerous Case of Donald Trump,” told Salon that Nancy Pelosi could have Donald Trump involuntarily evaluated, because he may be a threat to public safety:

As a coworker, she has the right to have him submit to an involuntary evaluation, but she has not…. Anyone can call 911 to report someone who seems dangerous, and family members are the most typical ones to do so. But so can coworkers, and even passersby on the street. The law dictates who can determine right to treatment, or civil commitment, and in all 50 U.S. states this includes a psychiatrist.

The advantage of a coworker starting this process is that a court can mandate a mental capacity evaluation before the dangerous person returns to work. The committing physician is preferably the patient’s treater, but does not have to be.

Predictably, Lee’s suggestion became the outrage of the day across the right-wing disinformation echo chamber. But she is clearly not alone in her concerns about Donald Trump.

Lee is one of many hundreds of prominent mental health experts, historians, attorneys, and other professionals who since 2016 have tried to sound the alarm about the dire threat that Donald Trump and his regime represent to America and the world.

Is it legal at this time to commit Donald Trump to a mental institution? The answer is no. But is Trump a threat to the United States and the world? The answer to that is absolutely yes.

The abundance of public evidence suggests that President Trump is mentally unwell.

Will the Republican Party and its followers place the good of the country over partisan fealty and an addiction to (white) power? Of course not.

Lee and other mental health professionals’ repeated warnings about Trump’s state of mind and behavior should, of course, be of great public concern. But such warnings no longer cause public panic and mass action — and never did. That fact carries ominous implications for the present and future of America.

The President of the United States has, today alone, retweeted 2 QAnon fan accounts, a Pizzagate account, an account that compared his following to a cult, and an account that described Obama as “Satan’s Muslim Scum.” And this insanity isn’t even a blip on the news radar.

The Age of Trump is also a symptom of a much deeper and larger societal problem. It is a function of what philosopher Henry Giroux describes as a “disimagination machine”:

I argue that the politics of disimagination refers to images, and I would argue institutions, discourses, and other modes of representation, that undermine the capacity of individuals to bear witness to a different and critical sense of remembering, agency, ethics and collective resistance. The “disimagination machine” is both a set of cultural apparatuses extending from schools and mainstream media to the new sites of screen culture, and a public pedagogy that functions primarily to undermine the ability of individuals to think critically, imagine the unimaginable, and engage in thoughtful and critical dialogue: put simply, to become critically informed citizens of the world….

The rise of the Tea Party and the renewal of the culture wars have resulted in a Republican Party which is now considered the party of anti-science. Similarly, right-wing politicians, media, talk show hosts and other conservative pundits loudly and widely spread the message that a culture of questioning is antithetical to the American way of life.

It is strange yet somehow predictable that this nadir in American history was so presciently described by political journalist Fletcher Knebel in his 1965 thriller “Night of Camp David: What if the President of the United States Went Stark-Raving Mad?”

Knebel’s book offers a scenario where the protagonist reflects on the nation’s predicament:

Suddenly the thought struck MacVeagh: President (Mark) Hollenbach must not be allowed to go into the conference with Zuchek (Russian premier). My God, Mark might be capable of anything. Who knew what Zuchek, a patient, steel-nerved negotiator, utterly devoted to Russia’s self-interest, would do vs Hollenbach, whose once brilliant mind now was obsessed with fancied tormentors and played like a child’s with the toy blocks of destiny.

“Oh Senator, how could you be so cruel — and so ignorant of the true facts.”

“Facts are facts, Mrs. Byerson…. There are no such things as true facts, for then we’d have to have false facts, wouldn’t we.”

“Night of Camp David” sums up its fictional dilemma, which feels painfully akin to our real-life situation: “Nobody in this country can tell a president of the United States that his mind is sick.”

In total, the Age of Trump is not “surreal.” Such a description implies some creative intention to reveal an uncomfortable truth through disrupting traditional artistic norms and agreed-upon perspectives.

To describe Trump, his movement and this historical moment as “unreal” would also be a failure of language and definition. “Unreal” implies something that cannot possibly exist. Trumpism is here. It is real. Its ugly roots in American white supremacy and global fascism are too obvious and in no way fantastic or imaginary.

Instead, Trumpism is best described as a type of “malignant reality,” in which cruelty, immorality and meanness are weapons used to twist reality to suit the authoritarian leader’s will and vision.

In short, the Age of Trump is strange and horrible, yet somehow still familiar.

Signalling to that truth, I was particularly struck by this passage from a recent interview with science fiction author William Gibson by the New Yorker’s Joshua Rothman:

Gibson has a bemused, gentle, curious vibe. He is not a dystopian writer; he aims to see change in a flat, even light. “Every so often — and I bet a lot of people do this but don’t mention it — I have an experience unique in my life, of going, ‘This is so bad — could this possibly be real?’ ” he said, laughing. “Because it really looks very dire. If we were merely looking at the possible collapse of democracy in the United States of America — that’s pretty fucked. But if we’re looking at the collapse of democracy in the United States of America within the context of our failure to do anything that means shit about global warming over the next decade . . . I don’t know.” Perched, eagle-like, on his barstool, he swept his hand across the bar. “I’m, like, off the edge of the table.”

Almost every day, I keep hoping that the Age of Trump will be resolved by a fantastical event, one perfect in its absurdity for this American (and global) moment of derangement.

In my fantasy, a Dr. Manhattan-like superhero descends from the heavens to vanquish Donald Trump and his forces. In response, Trump transforms himself into a giant orange monster man-baby – or perhaps more likely, Trump just hires his own kaiju mercenary. (Gigan, the monster sent by space aliens to conquer Earth in the 1972 movie “Godzilla vs. Gigan,” seems like the best candidate for such a job.)

And then for reasons only known to him and his creator Dr. Henry Belsidus, a giant “black” robot of terrifying power and superior technology, out of the African-American science fiction writer George S. Schuyler’s 1936 “Black Empire,” decides to join the battle.

Of course, the three combatants must fight somewhere in Texas. From his porch, “Champion” Joe Lansdale will be watching these titans clash, writing it all down as only he can, just like Norman Mailer did with the historic battle between Muhammad Ali and George Foreman, as recounted in his memorable book, “The Fight.”

Alas, reality as it actually exists in the Age of Trump is not quite that exciting. Time in this moment feels like a long slog, in which one year is overtaken and suffocated by the next.

That mundane terror makes matters no less horrible. That is the process through which authoritarianism takes over an entire society.

In the Age of Trump there will be no thunder in the streets from the treads of tanks or the boot-heels of soldiers. As the late political theorist Sheldon Wolin warned some years ago, American fascism will just be a new type of normal. In too many ways, it already is.

Is it fair to question a presidential candidate’s mental fitness?

Donald Trump has tested positive — for the bulls**t virus

On 24th September, 2020, IMANI partnered with ACEP for the first round of consultations with the public being undertaken by