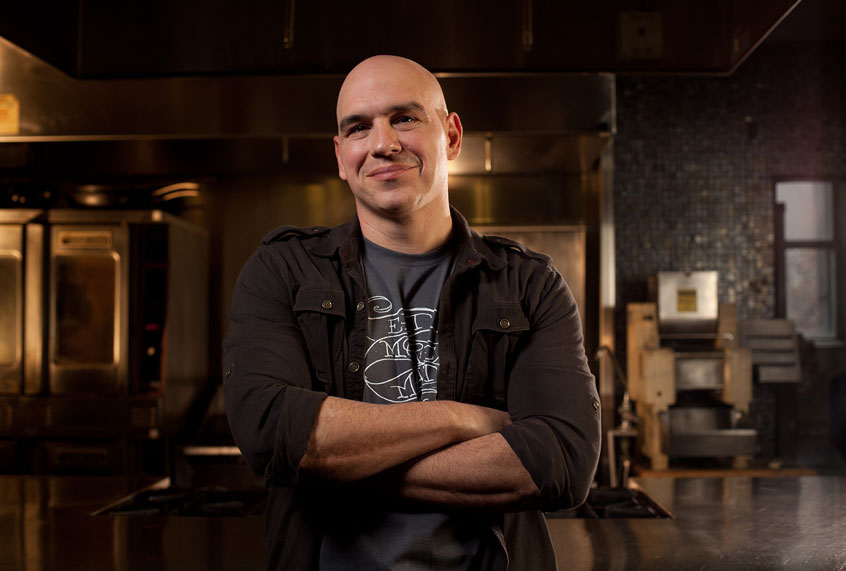 There is one food that is the ultimate comfort food for James Beard Award winner Michael Symon. A different recipe for this singular dish has made it into all six of the Food Network Iron Chef’s cookbooks, including his most recent: Fix It With Food.

“There’s nothing like a roasted chicken. I always tell if there’s one thing you need to learn how to cook, you need to know how to make great eggs — and you need to be able to roast a perfect chicken,” Symon told Salon in a recent interview. “And if you can do those two things, you can do most anything else.”

In Fix It With Food, Symon admits that he does not think he has ever gone a week without making a roasted chicken. He also reveals his two tricks for achieving a perfect roast, every time.

“One of the easiest ways to achieve roast chicken greatness is to season the bird inside and out, and let it marinate with the rub for as long as you can, ideally overnight (but 2 or 3 hours will do),” Symon writes in the book. “I know most recipes say to cook chiken for a while at 350-degrees Fahrenheit, but I prefer a hotter oven for a shorter amount of time, because it makes incradily cripsy skin without needing to rub the skin with butter.”

The recipe in the new book is for Ginger and Chile Roasted Chicken, which includes two anti-inflammatory ingredients that help Symon manage his autoimmune issues.

“I think the first chicken I did in my first book was — my wife, when she was a vegetarian and a vegan, she would still cook for me,” Symon recalled to Salon. “And she used to do a chicken dish, and we just called it ‘Lizzie’s Chicken.’ And it was just a roasted chicken with lemon, thyme and sage. It’s fantastic. I still eat it all the time.”

“Things have evolved from there, but this one’s just a little bit zestier. It’s got a little bit more bite to it, a little bit more zing to it,” Symon continued. “But I think, really, the key is once you learn how to roast a chicken — which the book tells you how to do — you could take spice mixes and aromatics and different citruses or vinegars and flavor it any way you want. And that’s what makes it special.”

Fix It With Food is no ordinary cookbook. Like Playing With Fire, his last collection of recipes, it was not born out of one of his award winning restaurants. Like his 5 in 5 series, it was not about how he gets food on the table quickly for his family. A former wrestler who was later diagnosed with external lupus and rheumatoid arthritis (RA), Symon writes that he “resigned to the fact that pain (and pain pills) would be a regular part of my life.”

Unsatisfied with that answer, Symon eventually turned to his diet for answers, and he found out that dairy was one of us biggest triggers. After making simple adjustments to his eating habits, he no longer self-medicates.

2. Add 3 tablespoons of salt to a large pot of water and bring to a boil over high heat. Add the pasta and cook until just al dente, about 1 minute less than the package directions. Drain and set aside.

3. In a large bowl, toss together the zucchini, tomatoes, and 2 tablespoons of the olive oil. Season with a pinch of salt and a twist of black pepper. Arrange in a single layer on a sheet pan and roast in the hot oven until the vegetables are nicely charred, about 10 minutes. Set the sheet pan aside.

4. Place a large heavy-bottomed skillet over medium heat. Add the remaining 4 tablespoons olive oil and heat to shimmering, then add the garlic. Cook until aromatic, about 2 minutes. Add the flour and whisk to combine until a sandy mixture forms, about 1 minute. Slowly add the cashew milk while whisking until the mixture is smooth. Cook until the sauce comes to a simmer and thickens, whisking the entire time, about 5 minutes.

Police Vow To Deal With Trouble Makers At registration Centres