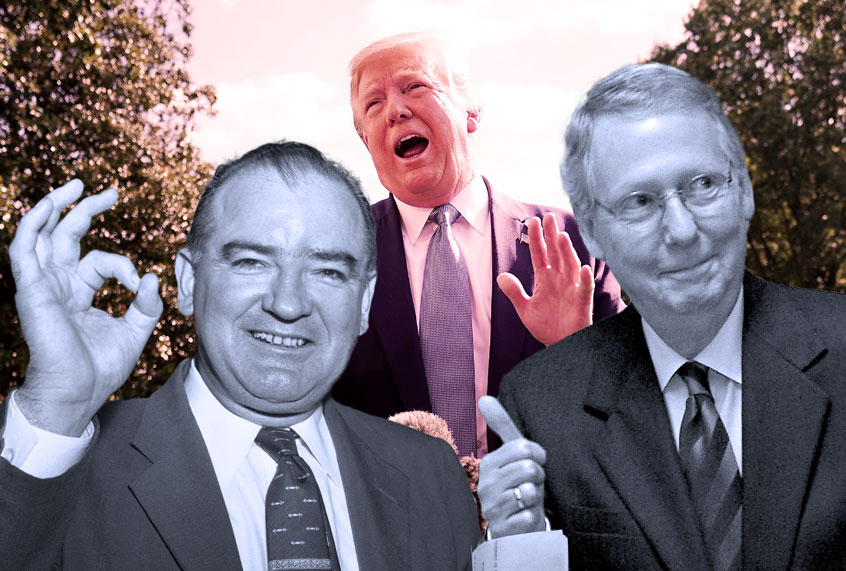 On the eve of the impeachment vote in the House of Representatives (it’s scheduled for Wednesday, but could get bumped Thursday, depending on how drawn-out debate gets), things are looking mighty bleak for anyone who hoped Republicans might turn over a new leaf. For the last several months, there has been plaintive hope that GOP lawmakers might be moved by the overwhelming evidence that Donald Trump is guilty of running an extortion scheme against Ukraine’s leaders to help him win re-election in 2020.

Right now, it looks like there’s no chance of any Republican defections in the House away from the GOP line that Trump did nothing wrong. The one Republican, Rep. Justin Amash of Michigan, who admitted out loud that Trump deserved to be impeached, was duly ejected from the party. In the Senate, Majority Leader Mitch McConnell has been openly bragging that he intends to rig the Senate trial in Trump’s favor. Even supposedly Trump-skeptical Republican senators, such as Utah’s Mitt Romney or Maine’s Susan Collins, have been avoiding questions about whether the Senate should call witnesses for the trial.

In the face of all this, a small group of anti-Trump Republican leaders who have been heavily represented in the media — George T. Conway III, Steve Schmidt, John Weaver and Rick Wilson — published an op-ed in the New York Times denouncing not just Trump, but the Republicans who support him. In the piece, in which the authors also announce the formation of a new political action group meant to deprogram Trumpists into what they perceive as normal conservatives, they attribute this loyalty to Trump to fear.

“But this president’s actions are possible only with the craven acquiescence of congressional Republicans,” they write. “They have done no less than abdicate their Article I responsibilities.”

Fair enough on the second claim — there is no doubt that Trump is guilty, and keeping him in power is an abdication of the duty of congressional members to defend and uphold the Constitution. But it’s naive to think that this choice to back Trump’s criminality is being done out of fear. Instead, the likelier story is that most Republicans support Trump not despite, but because of his all-out assault on our democratic system.

Whatever word you want to use for it — fascism, authoritarianism, pick your poison — the grim reality is that Republicans, both politicians and voters, appear to be all in on this project. It’s painful to admit this, but Republicans have flat-out rejected democracy. As a group, they are pushing towards replacing democracy with a system where a powerful minority holds disproportionate and borderline tyrannical control over government and blocks the majority of Americans from having meaningful say over the direction of the country.

Republicans are not cowering in fear of Trump. On the contrary, they are exalting in his shamelessness. Watching Republicans at impeachment hearings, where they performed outrage for the cameras, lied with obvious glee and gloried in sharing conspiracy theories, it did not appear that they were intimidated by their president or anyone else.

No, Republicans clearly feel empowered by Trump. He frees them to reveal their darkest desire — which is to end democracy as we know it, and to cut any corners or break any laws necessary to get the job done.

And the Republican voter base is right there along with the politicians. A new Washington Post/ABC poll found that, despite recent hearings that made it almost comically obvious how guilty Trump is, Republican voters are standing by their man. When asked if Trump should be impeached and removed from office, 86% of self-identified Republicans said no. In fact, in the face of mounting evidence of Trump’s guilt, Republicans are digging in even more. Fewer Republican voters support impeachment now than a similar poll showed in October.

It’s easy to write this off as pure tribalism, and there is no doubt that’s a big factor. But that can’t account for the entire phenomenon, especially since Democrats have shown no interest in pursuing evidence that Vice President Mike Pence was involved in the crime (though it does appear he is implicated), which would mean that dumping Trump wouldn’t actually cost Republicans the White House.

No, the darker truth is that Republican voters, like Republican politicians, see clearly what Trump did — use the power of his office in an overt attempt to cheat in the 2020 election — and they love it. Like their leaders, Republican voters are feeling done with democracy and eager to follow Trump into a new world, where the majority of Americans who vote for Democrats are kept out of power, by any means necessary.

As a Twitter user claiming to be “a white male in a red rural area of a red southern state” explained in a persuasive and widely shared thread on Monday, conservative voters have convinced themselves that they “are fighting for their lives and country,” which they believe is under threat from racial diversity. They therefore “feel justified in voter [s]uppression as a result” and “in winning by any means necessary.”

(I disagree with his proposed fix of pandering to this racism and sexism by giving these voters a centrist white male candidate, but he is 100% right that conservative voters feel that they are entitled to torch democracy rather than share power with people who don’t look like them.)

As Michelle Goldberg recently wrote in the New York Times, “Trump’s political movement is pro-authoritarian and pro-oligarch” and is “contemptuous of the notion of America as a lofty idea rather than a blood-and-soil nation.”

We can get into the intellectual nitpicking weeds over whether or not this is “real” fascism, but what should be indisputable is that the urges that drive Trumpism differ in no meaningful way than those that drive fascism.

That is why there’s such deep division in the U.S. over impeachment. It’s not that conservatives can’t see what Trump did when he used the power of his office to cheat in the 2020 election. They just don’t care. If anything, they’re glad he did it. This is the same party that repeatedly tried to shut down the government during Barack Obama’s presidency and was hugely successful in blocking his judicial appointments. This is the party that suppresses votes and gerrymanders districts into meaninglessness. They feel entitled to run the country and do not care if the voters disagree. Voters are just one more obstacle to be overcome in the Republican power grab.

There may be matters of style where many Republicans differ with Donald Trump — although they’ve largely gotten over that. But they see him as their single best weapon for ending American democracy, which Republicans increasingly see as an obstacle to their true goals.

Why SpaceX’s plan to put 25,000 satellites in orbit is bad news for astronomers

Should Brad Pitt really win an Oscar for acting?

The dangers of digital politics

Why are they not wearing Face mask? No social distance.

This man's mouth should be quarantine. Am surprised that a man you publicly condemned beyond a reasonable doubt before turned to St.Obi in 2020. We all have the clips. Be like say u wan tell us another tori.

U are a short devil u need to jail life in preson edo state is not for u, u think u have power more dan god , god will d grace u.

Oshiomole is a useless man

This man has no shame but can we learn from his unstable behavior?

This man should be at shame of his itself. Did he forgot what he said about this very Pastor? So he have come again to deceive Edo people. We are really maga in the hands of politicians . Oshiomole, please, leave Edo state alone

Oshiomole is a loquacious person, a pigmy in height, in character in attitude, in words, in morals and in thinking. He should pray for recreation.

Oshomole is a blood pressure

Kidnapping: AGF takes over trial of Wadume, 19 others