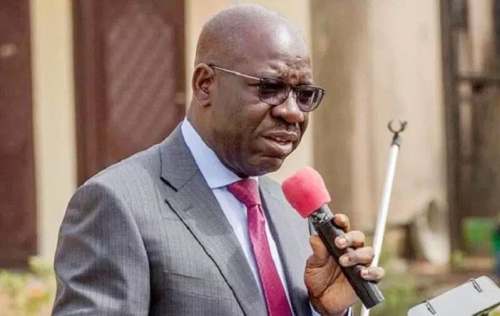 Gov. Godwin Obaseki of Edo on Friday assented to the 2020 Appropriation Bill of N179.2 billion of the state.

Speaking at the ceremony at Government House in Benin, Obaseki said he was hopeful of implementing the budget fully.

“It is a budget that I hope and expect will have a performance of not less than 90 per cent.

“We have gone through all the assumptions and have moderated our expectations. It is quite less than what we appropriated in 2019.

“We cannot deceive our people; we have reviewed our macroeconomic situation and determined that what should be appropriated for 2020 should be close to what we will generate,” he said.

The governor commended the House for ensuring that the budget was signed into law before Dec. 15, a feat he described as historic in the state.

Presenting the bill, the Speaker, Edo House of Assembly, Mr. Francis Okiye, said the budget presented to the House was slightly increased by 0.09 per cent which was about N1.6 billion.

“The House looked at the governor’s programmes for 2020 and decided to increase the appropriation.

“We believe that putting this budget to work, Edo will have a new look and a new song under the Obaseki administration,” he said.

The News Agency of Nigeria (NAN) reports that the 2019 Appropriation Act had a figure of N183. 7 billion, while the 2020 Appropriation bill was presented to the House on Nov. 13.

Naana Jane urges Muslims to pray for peace for nation