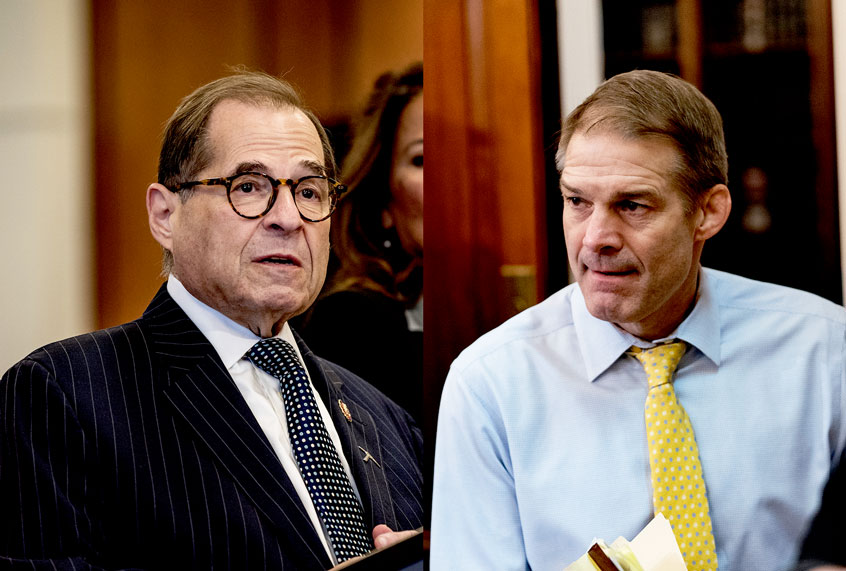 House Democrats said they planned to move quickly on impeachment and it appears they really meant it.  It’s hard to believe that the process has come this far in just eight weeks, but Nancy Pelosi and the rest of the House leadership seem determined to get this thing over with as soon as possible, so it’s rushing toward completion before we can even catch our breath. (I’m on record disagreeing with that strategy if it means ignoring the gigantic body of evidence pointing to corruption and the obstruction of justice documented in the Mueller report. But nobody asked me my opinion, so …)

Intelligence Committee Chairman Adam Schiff, D-Calif., has said his committee will have a full report on its findings in Trump’s Ukraine bribery scandal ready for review by the House Judiciary Committee this week. The hearings, depositions, text messages and contemporaneous notes from the witnesses, as well as the White House “transcript” containing what amounts to a presidential confession,  are all public knowledge. So the report is unlikely to contain any surprises. But Schiff did not rule out other information “coming to light,” and it’s certainly possible.  It seems as if there is a new crime revealed every day.

Judiciary Committee Chairman Jerry Nadler, D-N.Y.,  will gavel his committee’s first hearings on Wednesday morning. Members plan to first hear from various experts about the impeachment process itself and then begin the process of evaluating the evidence. That certainly means the Intelligence Committee report, and possibly more information from the Mueller report and other committees engaged in oversight. If they determine the evidence meets the constitutional criteria they will draw up articles of impeachment and put them to the House for a vote.

Republicans have been whining for the past two months about “the process,” rending their garments over the fact that the president wasn’t allowed to have lawyers present to defend him during the Intelligence Committee hearings. (One might have thought that the Republicans on the committee might have felt injured by that, but they played along, unaware or simply not caring that the president was essentially calling them chopped liver.)

It’s still unclear exactly how Nadler plans to proceed, but it’s possible he had thought to follow the Bill Clinton impeachment model, under which hearings would first establish the constitutional grounds for impeachment, followed by appearances by the chairs of relevant committees presenting evidence of impeachable offenses, and culminating with a presentation by the president’s lawyers giving their side of the story. It doesn’t look like that’s going to happen.

Nadler offered the White House the opportunity to participate in the Judiciary Committee hearings, but late Sunday night White House counsel Pat Cipollone issued another incomprehensible, word-salad letter to the committee refusing to have anything to do with what he claims is an unfair process. It’s far more likely that the White House doesn’t care to participate because it can offer no reasonable defense. It’s one thing to have GOP congressmen blathering on about Joe Biden and conspiracy theories, and quite another to have a professional attorney excuse Trump’s behavior under oath.  We have yet to see anyone effectively make a coherent case in his favor, beyond fatuously claims that the president is a crusader against corruption, which is ludicrous but still would not excuse his bribing a foreign leader to help sabotage a political rival and smear the opposing party. It is indefensible on the merits and one can certainly understand why none of his lawyers would want to go there.

So it looks like it’s going to be up to Republican members on the committee to make his case for him. Judging from what we’ve heard from various prominent Republicans over the weekend, we can expect that this next phase will see a ratcheting up of resistance to the proceedings and more antics from the backbenchers on the Judiciary Committee. They have some real characters who are ready to turn this into a wild and crazy trip down the rabbit hole.

We don’t yet know how Nadler plans to run the hearings but I think everyone hopes he follows Schiff’s example. A draft of possible impeachment proceedings from September indicates that Nadler plans to allow committee staffers “designated by the chairman and ranking member” to “ask questions of witnesses for a total of one hour, equally divided across the parties (in addition to the normal questions from members),” so it’s likely that the hearings will at least have an hour or so of meaningful exchanges.

But that’s going to be tough. This committee is one of the most rancorous in the House and it has twice as many members as the Intelligence Committee. Many of them are showboating egomaniacs on a good day. Both Rep. Jim Jordan, R-Ohio, and Rep. John Ratcliffe, R-Texas, who were highly combative during the Intelligence Committee hearings, also sit on Judiciary, so we can expect more of their red-meat performances. And we can be sure that Trump’s most loyal guard dog, Rep. Matt Gaetz of Florida, along with borderline crackpot Rep. Louie Gohmert of Texas, will be looking for ways to upend the proceedings.

As Judiciary member Rep. Andy Biggs, R-Ariz., told Fox News on Sunday, “it’s a bunch of brawlers sometimes on the Judiciary Committee, so it should get pretty hot and under the collar as we go along. I don’t think things have been done the way they’ve been done in the past, Mike, and so it causes some rancor and it should be pretty — much more feisty, I would say than the Intel Committee was.”

Nadler has his hands full, to say the least. But if anyone thinks that the circus atmosphere will be over once the House votes on impeachment and it moves to the more staid and dignified Senate, they should think again. Republican senators are behaving little better than Gaetz and Gohmert. Sen. Lindsey Graham, R-S.C., has vowed to call Hunter Biden to testify on the premise that “we’re not going to live in a country where only one party gets investigated.” (Which must have made Bill Clinton shake his head in wonderment, considering that Graham was one of the House managers of his impeachment trial.)

But Graham has to battle another Southern senator for the role of most outrageous Trump defender. That would be Sen. John Kennedy of Louisiana, who has been currying favor with Trump by appearing on the Sunday shows making rash claims about Ukraine interfering in the 2016 election.

This is crazy talk, but it’s very likely where the impeachment process is headed both in the House and the Senate. The most sober and dignified part of the process is probably behind us, unfortunately.

Whoops, Trump did it again — the same blackmail scheme that got him impeached

The summer after eighth grade, I noticed some dry, flaky patches of skin on my scalp. When they didn’t go