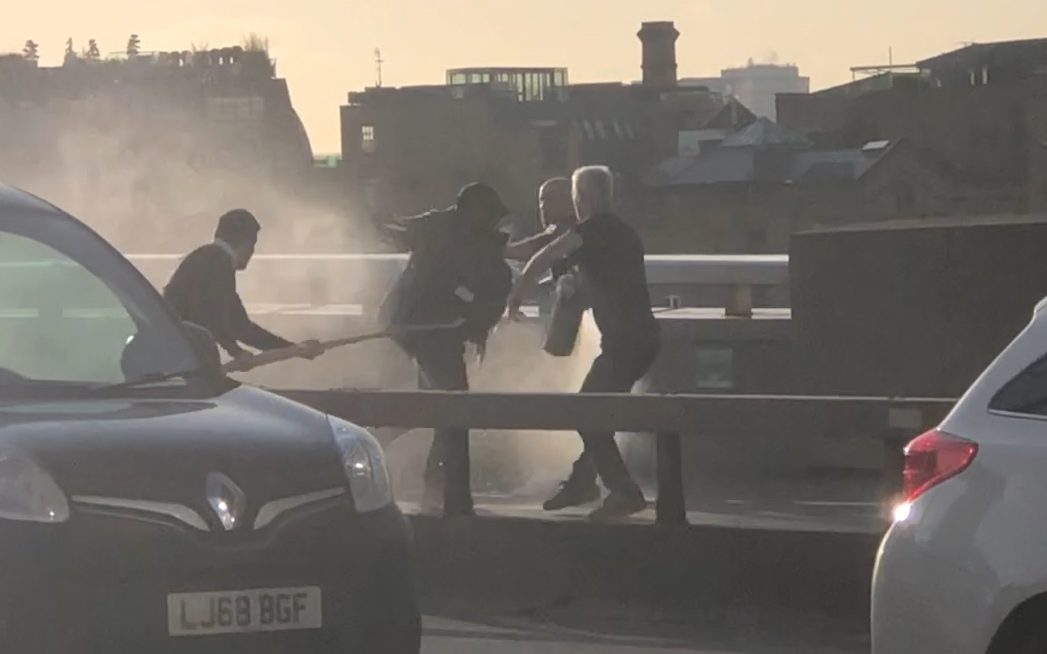 Footage taken by a passersby has revealed the sheer instinctive guts and determination of those who confronted Usman Khan in the moments after he carried out his murderous attack inside Fishmongers’ Hall.

Two men can be seen cornering the terrorist on London Bridge armed only with the nearest objects which came to hand – a five-foot antique Narwhal tusk and a fire extinguisher.

A third man uses just his bare fists to help force Khan onto the ground before he is shot and killed by armed officers who arrived on the scene within minutes of him launching the attack.

It is now thought the man who used the whale tusk as an impromptu weapon to corner Khan was a Polish-born chef who had been working at Fishmongers’ Hall.

Colleagues and those attending a prisoner rehabilitation conference organised by the Institute of Criminology at Cambridge University told how, with barely a thought for his own safety, the chef, called Lukasz, grabbed the tusk from a wall from where it had been displayed inside the hall and attempted to defend others around him from Khan.

As the fight spilled out onto London Bridge, and despite being stabbed three times by Khan, Lukasz used the tusk to prod and push him against a railing to prevent him escaping and causing further injury.

A man alongside him sprayed fire extinguisher foam over Khan to disorientate him further.

Amy Coop, a director of the TV soaps Hollyoaks and Doctors who attended the event, wrote on Twitter: “A guy who was with us at Fishmongers’ Hall took a 5ft narwhal tusk from the wall and went to confront the attacker.

“You can see him standing over the man with what looks like a white pole in the video. We were trying to help victims inside but that man’s a hero.”

A colleague of Lukasz, who asked to remain anonymous, said: “Lukasz grabbed a nearby pole and ran at him, getting stabbed in the hand in the process but continued to pin him down.

“Being stabbed didn’t stop him giving him a beating. Lukasz is a hero.”

Khan is believed to have started  “lashing out” in a downstairs room of the hall but was grabbed by the conference-goers and bundled out of the front door as he tried to go upstairs.

Also involved in the brave attempts to pin down and disarm Khan in the moments before the armed offices arrived was an off-duty British Transport Police officer.

He managed to wrestle one of Khan’s two knives from him and – holding it with care so as not to contaminate any fingerprints or DNA on the weapon – moved away from the scene so that it was out of reach.

The off-duty officer was yesterday interviewed by colleagues from the Metropolitan Police’s terror command unit investigating the attack, along with the others who confronted Khan.

“The courageous actions he took when faced with the horrors of this attack are remarkable.

“He, as well as other members of the public, should be extremely proud of what they did to stop this man on London Bridge.”

Passerby Thomas Gray, 24, leapt out of his classic Mini and helped wrestle Khan to the pavement before stamping on his wrist to release the knife from his hand.

Mr Gray described how the attacker brandished an eight inch knife in each hand.

“One thought was going through my mind – stop the dude. I’ve played rugby for most of my life and the rule on and off the pitch is ‘one in, all in’,” he told The Telegraph.

“I was just a Londoner doing my bit.

“Hats off to the six or seven guys who were there before me, they’re so brave. They were chasing him down the street with a silver fire extinguisher and that’s what drew my attention to him. He was being sprayed with foam.

“We could see it was something serious and we should try to fix it.”

After the attack, he said he “did the British thing and went to the pub” with his friend Stevie.

“We had a pint and shook it off then came back and let the police know I was here with the keys for the cars in case they wanted me to move one of them.”

Among members of the public who chased Khan from Fishmongers’ Hall were former prisoners attending the rehabilitation event, including a man convicted of killing a young woman.

James Ford, 42, was out on day release when he joined those who chased Khan out onto the street before he was pinned to the ground on Friday afternoon.

Ford was jailed for life with a minimum of 15 years in 2004 for the murder of Amanda Champion, who had a mental age of 15. It is thought Ford rushed to the scene and tried to save the life of a woman victim of Khan.

Sources said his actions during the attack had probably saved lives. But Ms Champion’s family expressed concern that he had been allowed on day release from prison without his victims’ relatives being informed in advance.

Ms Champion was found strangled and with her throat cut on waste ground near her home in Ashford, Kent, in July 2003.

Police had no leads in the case until a Samaritans worker broke the organisation’s strict confidentiality policy and revealed that Ford, a factory worker and amateur wrestler, had called and confessed: “I’ve killed a girl.”

In the month after murdering her, Ford phoned the charity line 45 times, telling staff he was feeling suicidal. After he admitted his crime, the Samaritans worker – who was later forced out of his job – decided to go to police.

Ms Champion’s family had tried to block Ford’s parole, and only found out he had been released from his sentence in a call from their police liaison officer on Friday, warning them his image was on television reports of the attack.

Ford was serving the final days of his sentence at HMP Standford Hill, an open prison in Kent, when he was allowed to attend the event.

Ms Champion’s aunt Angela Cox, 65, told The Daily Mail: “He is not a hero. He is a murderer out on day release, which us as a family didn’t know anything about. He murdered a disabled girl. He is not a hero, absolutely not.

“I am so angry. They let him out without even telling us. Any of my family could have been in London and just bumped into him. It was a hell of a shock. It is a horrible thing.  I don’t care what he’s done today, he’s a murderer.”

Speaking at the scene yesterday, Metropolitan Police Commissioner Cressida Dick said the heroism of members of the public illustrated the best of humanity.

“In amongst that horror, we witnessed the most extraordinary courage by members of the public as well as City of London, Met Police officers and emergency services,” she said.

“It’s a terrible thing that people found themselves in that position – but as we saw the worst of humankind, we also saw the very best of human spirit and of London.”

The Queen yesterday praised the “brave individuals who put their own lives at risk to selflessly help and protect others”.

The 22-bed capacity facility would also house staff of the Hospital, who might fall sick or contract the novel Coronavirus